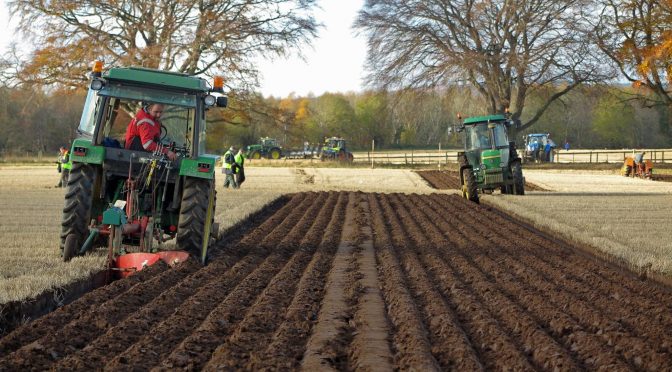 In Scotland ploughing matches started to be held in the late eighteenth century. By the first decade of the nineteenth century matches were held in a number of locations across Scotland. One such match was held in Easter Ross. An extensive account of it was published in the Caledonian Mercury. It provides a range of insights into how early matches were organised and some of the issues facing ploughing, the skill of ploughmen and ploughing developments. 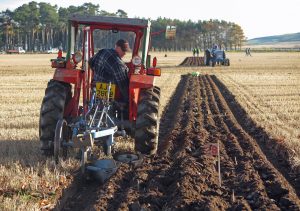 “The Easter Ross branch of the Ross-shire Farming Society held their first ploughing match at Blackhill, the property of E. Hay McKenzie, Esq, of Cromarty, near Balnagown Castle, upon Thursday the 17th April last, when eleven ploughmen took their ground as competitors, for premiums granted by the Society; and after the work was accomplished, the Judges, who were selected from the most improved class of agriculturists, after a minute and critical inspection, unanimously adjudged the prizes to the following persons:

The first to John Ross, ploughman to Sir Charles Ross, of Balnagown, Bart, the second to Hugh Ross, ploughman to Hugh Rose, Esq of Glastullich; the third to Hector Bain, ploughman to E. H. McKenzie Esq of Cromarty; and the fourth prize to William McLeod, ploughman to Mr James Monro, taxman of Delny.
The ploughmen in general executed the work with so much skill and precision, that it was with some difficulty the judges could form their determination. 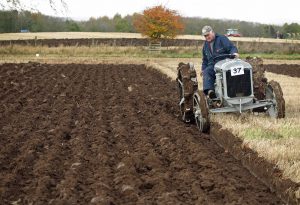 The members of the Society, in consideration of the different take being performed with so much regularity, gave a gratituity to each of the unsuccessful candidates, who were all amply refreshed with strong ale, spirits &c by the members present.
Mr Those of Glastullich was also present, and with that sentiment which so materially marks all his measures of a public nature, he gave a gratification to all the ploughmen that appeared.
Colonel John Ross, of Castle Craig, offered, previous to the 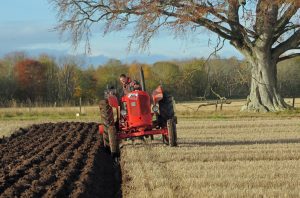 competition, to give premiums to the sourth country ploughmen in the country, if they appeared, or in order to lay down a superior example to the ploughmen bred in this part, but none came forward. Colonel Ross further offered a premium for the best implements of husbandry, to those that would exceed Mr Small’s of Leith Walk, five guineas; that would equal Mr Small’s, three guineas; or that which appeared to the Society the best executed article of husbandry, three guineas. A cart made byMr John Munro at Newtarbat Shore was produced, and no other implement of husbandry having been produced, he is considered by the Society the first tradesmen in Easter Ross. 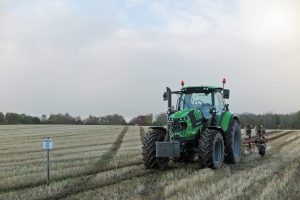 The next ploughing match of this Society is to be held in November next, of which due intimation will hereafter be given; and it is hoped there will be a more full attendance of the Gentlemen and Farmers, to countenance and forward a measure of such importance to the growing wealth of the country, and that has succeeded so perfectly in the southern parts of the kingdom.
After the ploughing match, all the members of the Society, and other gentlemen that were spectators, retired to Urquhart’s Inn, at Milntown, where they spent the evening with becoming harmony and conviviality.

The photographs were taken at the Easter Ross Ploughing March, November 2017.