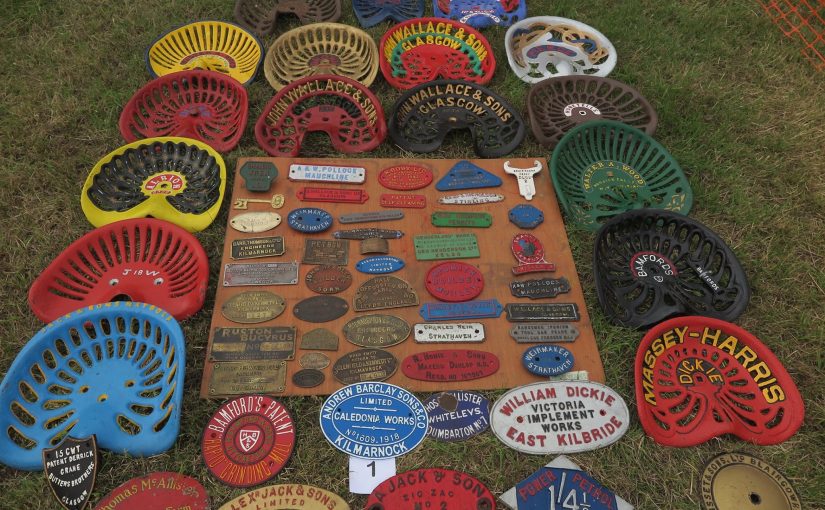 Some of the local shows, such as those in Ayr, Glasgow, and East Lothian, were especially important, with some of the English makers taking a stand and bringing their manufactures to audiences there. They included the show in East Lothian of the United East Lothian Agricultural Society, one of the leading agricultural societies. In 1876, a time of increasing mechanisation, the Show was a large one, with an “excellent and varied” display of implements and machines, including those from English and leading Scottish makers; it also had a trial field.

What could the farmer and agriculturist see at the United East Lothian Agricultural Show? As the show was an important one, extensive accounts of it were published in the local newspaper press and the framing newspapers. The North British Agriculturist, the national farming newspaper, provided an extensive and detailed account of the implement department, which is worth quoting at length:

“This department of the show formed, as usual, an excellent and varied display of agricultural implements and machinery, as well as of many articles which could scarcely be recognised as coming within this category, but which, undeniably, contributed much to the generally attractive character of this part of the exhibition. In giving a notice of particular stands, it will be most appropriate on our part for obvious reasons to confine ourselves mostly to what may be termed agricultural stands, and indeed only to the more prominent of these. First in order we have pleasure in noticing Ord & Maddison, Darlington, represented here with their weed eradicator for clearing the grain braird of wild mustard and other weeds. By recent trials in Scotland, both under the auspices of the Highland Society and the East Lothian Agricultural Society, this machine has come very prominently before the public, and its exhibition here necessarily excited much interest. On Friday week it was tried under the auspices of the East Lothian Society, and a committee was appointed to report upon it, but the report has not been issued yet. The trial field, which was on the farm of Mr Stevenson, Hawthornbank, was scarcely so dirty (but the soil from recent rains was very moist) as that at Craigmillar, where it was tried under the auspices of the National Society. In the East Lothian field, of course, more of the weeds were torn up by the roots, although it may be said that in other respects the capabilities of the machine were more fairly put to the test in the Craigmillar field. The judges here, as in the former trial, seemed quite impressed with its usefulness, but its present price, it was considered, would be a deterrent circumstance in regard to its general use by agriculturists. It may be noticed fitly here that since last year Messrs Ord & Maddison have made an important change on the machine, which will very obviously make it easier in motion and more durable. The improvement is the introduction of bass rollers-thus removing all friction in the parts-to run in the excentrices.

Messrs Dodds & Rignall, engineers, Haddington and Edinburgh, exhibit a fine collection of mowers and reapers, rakes, potato digger &c, made by the most of the widely known firms in the kingdom, which secured a good share of attention from visitors. In the large stand of Isaac Cole, Princes Street, Edinburgh, the grooming machine which he had forward attracted a good deal of attention on the part of farmers. It consists of a stand with a fly-wheel, and operates by a series of shafts, encased tubes, and connected by a peculiar species of universal joint which enables a revolving brush to be operated upon in every direction. The brush proceeds, in the hands of an operator, over the horse’s flanks and legs in a surprisingly short time. A horse was brought forward in the show and underwent a grooming, the operation being witnessed by a large number of farmers. The horse, although somewhat dirty, was exceedingly well cleaned, but even during the few minutes to which the operation extended the turning of the handle seemed a pretty hard job, and such as no weakling would like to undertake. The machine can be driven by steam power, and in this way twenty of them are in operation in the Glasgow Tramway Car Company’s establishment, where they are said to be giving satisfaction. Twenty horses, it is also said, can be cleaned in an hour with one machine applied to steam power. We understand it has lately been introduced into some of the valuable English cattle herds, where it might be of great service in maintaining the clear, sleek, mellow coat so desirable. Among work horses also it seems likely to be of some use. Although there seems no doubt as to its utility and capabilities, it is, like most new inventions, just rather too “salt”, in a pecuniary sense, for the farmer, and perhaps the aptness of the remark of an onlooker-“We’ll wait till it’s cheaper”-will be proved by its being carried well into practice.

David Foulis, ironmonger, George Street, Edinburgh, had forwarded a choice collection of stoves, mangles, wringing and washing machines &c; and Mr Linton, Jedburgh, had as usual an attractive display of well-known churns, as also of butter and cheese vessels, for which he and Mr Brown and Murray, Haddington (who were also first in the washing and wringing competition), were awarded certificates. The combined corn and grass seed-dressing machines, and the National Society’s premium fanners of John Richardson, Carlisle, were not the least conspicuous amongst the exhibits.
Jack & Sons, Maybole, were represented by well-tried and useful implements, such as the Buckeye mower and reaper, a turnip tailing and topping machine, and Aspinall’s patent potato planter. Their strong and well-made barrel churns were the special exhibits which Robinson & Richardson, Westmoreland, had forwarded; while a splendid assortment of hay-rakes, washing-machines, and American ploughs were all of substantial make. The “Excelsior” stone-breaking machine of Messrs David Gray, Coatbridge, was in operation, and was an object of considerable attention to large numbers of visitors. Edwin Sherwood, Bedale, had forward his two-horse reaper, with new crank arrangement; and Logan & Elder, Berwick-on-Tweed, their imperial reapers and mowers, which came in for a share of notice. A. & J. Main & Co., Edinburgh, had perhaps as fine a show of agricultural implements as any firm represented in the showyard. Amongst the most conspicuous of the many useful implements they exhibited was Wood’s self-delivery reaper, which, having here controllable rakes, can put off sheaves of any size; Samuelson & Company’s well-known reaper and mower, and Ransome’s “Star” semi-acting chain delivery horse-rake, which were exhibited for the first time in Scotland; Wallace’s patent potato digger, and the continuous bar-fencing of their manufacture. Sheaves of any size can also be put off by the Johnston Harvester, which was introduced into this country three years ago, and which is here shown by Mr Thomson, Alnwick. It, however, requires, if we mistake not, to be stopped and gearing changed before the Harvester can alter or vary the size of the sheaves.

J. Bisset & Sons, Blairgowrie, had forward, along with one or two useful reaping machines, their potato digger, which is doing good work in practice. Mr hunter’s (Maybole) stand has for a long time been a great attraction to progressive agriculturists, and to show that it was here still as attractive we have only to mention he had forward, among other well-known firms, his self-acting double drill turnip thinning machine and his “Excelsior” double drill turnip topping and tailing machine. Messrs Robey & Co., Lincoln, made a very creditable appearance here in their beautiful and well constructed “Robey” traction engine, which, it may be mentioned, has all the working parts carried in a U-shaped casting placed on the top if the boiler; a thrashing and finishing machine and two portable engines of the most approved construction occupying the rest of their space.
Messrs Fowler & Co. are not behind, which, of course they were not expected to be in the East Lothian showyard. In addition to three powerful and finely-finished ploughing, traction, and general purpose steam-engines, they have on the ground a nine-tined steam cultivator for grubbing and opening the land, and making turnip drills at the same time if necessary. This enterprising firm has also on the ground a steam harrow and clod-crusher, and a presser-roller which had never been exhibited here before. The harrow and clod-crusher is introduced by this form to remove a difficulty experienced, especially in East Lothian, where steam cultivation is adopted. It has been found that the farmers are not able to break the clod and bring the land to a fine tilth in good time after the steam cultivator. Often the clods get so hardened by drought that they cannot be crushed by the common horse Crosskiller or roller, and the land loses-which it has no need to do in East Lothian-the moisture too much by being left so open. The presser-roller consists of five convex-edged wheels, which run between and press the furrows. It is attached to and runs behind the steam plough on the ploughed land. The trial of these new implements will be found reported in another column. The next stand-that of John Doe, Errol-contains a large and splendid assortment of Bamlett’s well made and useful reapers and mowers. Thomas Shirreff & Co., Dunbar, occupy a large space well filled with farm implements of almost all kinds, the ploughs, harrows, grubbers, turnip slicers and cutters, sowing and reaping machines, and carts especially attracting attention. Messrs McIllwraith and Co., Glasgow, had on the ground a large assortmrnt of covering material worthy of special notice, being their new, self-ventilating covering for stacks. While keeping the rain out, it is so openly wrought as to afford free ventilation, and in this respect is better than tarpaulin. The portable steam engine and thrashing machine of Wm Foster & Co., Lincoln, attracted considerable attention. The British Dynamite Company, Glasgow, had forward samples of their material for blasting purposes, an account of experiments in which will be found in another column.

On Saturday Hanson & Hunter’s (Maybole) turnip-thinning machine, and also that of Messrs Pirie & Co.’s (Aberdeen), were put under trial by the implement judges of the show in a field some distance from the yard. The work of the two machines came so near each other in point of efficiency that the judges awarded to each of the owners a silver medal. The thinning, as it was, was done with remarkable regularity, but a cluster of plants, instead of one, were generally left at the specified distances, so that the machines would always require to be supplemented or followed by hand labour for the purpose of trimming. Notwithstanding, the machines were considered a very important addition to the appliances of machinery in the cultivation of the soil, as they would have about one-third of the labour in thinning.”

Quite a show with lots of developments for the East Lothian farmer to consider.