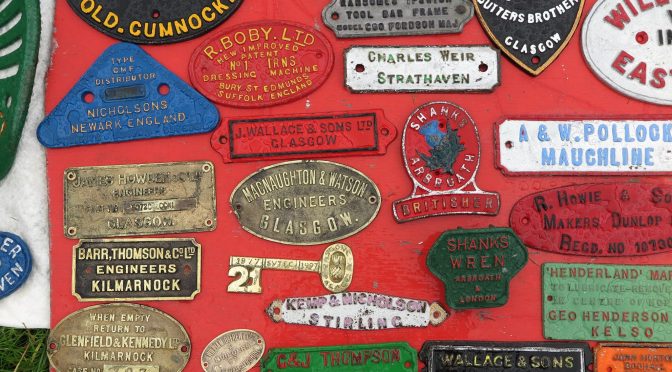 If you were a farmer in Scotland in 1928 are were looking to see what was around and what new implements and machines were around you would probably have gone for a good look at the Highland Show. Show reports are a great source of evidence to show what was notewothy and what caught the eye of the reporter. The writer for the Scotsman wrote about the show in terms of wonder. This is what he wrote:

“Visitors will find a great deal to interest them in the extensive section of implements, which is described as the “Motion Yard”, and an hour or two’s inspection of the exhibits will prove to be time well spent. The display in its variety will perhaps amaze the unitiated, while those associated with the tillage of the soil, and the reaping of crops are sure to find some new feature of special attraction to them. Well advanced as is the manufacture of implements in familiar appliances are always being produced by ingenuous minds, profiting by experience, and practically every show of the National Society has something to offer of benefit to the farming society. Practically all the regular exhibitors are again represented, despite the handicap of distance, and the display on the numerous stands is imposing as it is assorted.

“Everything for the Farm”
The usual wide range of agricultural implements is presented at Stand no. 12 by Mr James H. Steele, Harrison Road, Edinburgh, and a survey of the numerous exhibits leaves one with the conviction that the firm’s motto, “Everything for the Farm”, is fully justified. “Apply within upon everything that the farmer requires” is another phrase which might aptly meet the scope of business carried on by Mr Steele. Amongst the reaping machinery, an outstanding exhibit is the Ruston Hornsby now Standard binder, which gained the silver medal at the Royal Show in England last year. There are also a number of petrol-paraffin engines made by the same firm, as well as several varieties of the well-known Ransomes ploughs for all purposes, including the new patent Mole draining plough, an implement which has been meeting a long-felt want on both sides of the Border. As demonstrating the merits of the new Tayproof waterproofing composition, an engine is to be seen pumping water on to one of these covers, while another demonstration of special interest to the housewife is that of the Daisy washing machine. Roto salt bricks for cattle and horses are to be found on the stand, together with all the best makes of corn bins, sack elevating barrows, pig feeders, cattle troughs, rick loaders &c. This year Mr Steele is making a special feature of dairy appliances, in the display of which are included automatic water bowls of single and double patterns for cattle, cream separators, churns, milk cans, bottle boxes, milk bottles, and, in fact, everything required for milk from the time it leaves the cow until it reaches the consumer. Milk dealers should be interested in the new bottle-filling and discing machine which is being demonstrated daily at the stand. The poultry side of farming is likewise fully catered for, and here special attention is directed to the new Imo egg preserver, an invention which does away with all chemical preservatives and ensures a supply of fresh eggs all the year round. A 300 egg size machine will demonstrate the capabilities of the invention, which is being seen at the Highland Show for the first time.

The Sentinel Waggon Works (Ltd), Shrewsbury, have on view at Stand no 4 one of the latest types of these extremely useful ad popular vehicles. A rigid six wheeler, fitted with a platform measuring 20 feet by 7 feet, it is capable of carrying up to 15 tons. Specially suitable for the cartage of flour, oil cake, and all general agricultural products, this vehicle has a mileage of 17 per cwt of fuel. Sentinel waggons, which are to be seen on the streets and roads in every part of the country, are gaining favour every year among haulage contractors and others concerned with transport in business. Present-day users swear by the Sentinel as being one of the most economic waggons available, while their reliability is another strong point.

Messrs P. & R. Fleming & Co., Argyle Street and Graham Square, Glasgow, make their usual attractive display of implements at Stand no. 22. Outstanding in the collection in the collection are the popular Waugh patent sheep dippers, fitted with a new circular pen, the combination making a very simple and effective means of dipping. Attention is directed to the Fleming potato sprayer, which is seen with a new direct driven gun-metal pump. Other popular exhibits include drinking bowls, horse forks, liquid manure pumps, potato planters, food coolers, binders, mowers, oil engines, grinding mills; in fact, a complete arrangement of implements and machinery for the farm.

Reliable oil engines
Two of their well-known engines are shown at Stand no. 51 by Messrs Alex Shanks & Son (Ltd), Dens Iron Works, Arbroath. A prominent position is occupied by their 42-48 bhp cold starting hortizontal oil engine, which is suitable for using crude and residual oils, and is capable of a full load within a minute of starting. A smaller powered engine, with hot bulb starter, is also on view. The firm are also to be found at Stand no. 122, where they present for inspection an interesting collection of lawn mowers, in the manufacture of which Messrs Shanks have long been famous. There is a triple mower for horse draught – a particularly useful machine for golf courses. Several types of motor mowers are also on view, as well as specimens of the noted Caledonia, Talisman, Britisher, and other well-known lawn mowers.

Road-making machines
Messrs McCreath, Taylor & Co. (Ltd), 30 Jamaica Street, Glasgow, make a display of heavy plant for road-making purposes at Stand no. 37. Here are to be seen bitumen boilers and sprayers of different capabilities, a tar-macadum mixer, a petrol-driven concrete mixer, standard derrick, and a petrol-driven motor roller. Other exhibits include spraying machines and gritters, a Broadbent model stone-breaker, along with specimens of concrete fencing and ornamental work, rubber blocks for paving purposes, bitumen, &c.

Reliable threshers
A wide assortment of machinery and implements is staged at Stand no. 13, occupied by Messrs Barclay, Ross & Hutchison (Ltd), 67-71 Green, Aberdeen. For many years the firm have been famous for their threshing machines, which are held in high esteem for efficiency and reliability. Various types of these threshers are on view, ranging in price from about £50 to £222. Several well-known makes of engines are also presented for inspection, together with manure distributors, binders and mowers, horse rakes, potato diggers, cultivators, cream separators, and other dairy appliances, poultry accessories, garden seats, &c.

Motor spirit and oils
The Anglo-American Oil Co. (Ltd), 41 ½ Union Street, Aberdeen, occupy Stand no. 15, where they have on view some of their renowned motor spirits, oils &c. These include Pratt’s Perfection and Aviation spirits, Pratt’s gasoline benzol mixture, also White Rose and Royal Daylight lamp oils, oil cookers and heaters, vaporizing oil for power engines and tractors. Pump equipment for bulk storage of petrol and oils can also be seen here, together with samples of the Angloco candles &c.

Apart from these particular stands, many other firms whose names are familiar to agriculturists are to be found in the showyard, all displaying their special lines of products. The [presence of many heavy traction engines and road rollers is a striking feature of the motion yard, and as usual, practically all of them have been brought from the Midlands of England. Among the exhibitors of such machines are Aveling & Porter (Ltd), Rochester, who show two types of road rollers and a concrete mixer; Messrs John Fowler & Co. (Ltd), Steam Plough Works, Leeds, who have forward one of their complete road-making plant; Messrs Marshall, Sons & Co. (Ltd), Gainsborough. Another impression which a round of the stand leaves is the progress that has been made in the application of oil engines in farmstead duties as indicated by the large assortment presented for inspection. Engines can now be had for practically every task around the steading, and they are to be seen in varying capacities at the stands of the Associated Manufacturers’ Co. (Ltd), London; Messrs William Reid & Leys, 8 Hadden Street, Aberdeen; Ruston & Hornsby (Ltd), Lincoln; Crossley Bros (Ltd), Openshaw, Manchester; Petters (Ltd), Yeovil, Somerset; C. F. Wilson & Co. (Ltd), Constitution Street, Aberdeen; Blackstone & Co. (Ltd), Stamford, Lincolnshire; Allan Bros, Ashgrove Engineering Works, Aberdeen, &c. There is the customary comprehensive exhibition of threshing machinery in motion, prominent in this section being such well-known firms as Messrs Ransomes, Sims, & Jefferies (Ltd), Ipswich; James Crichton, Perth; James Robertson, 14 Hadden Street, Aberdeen; the Bon Accord Engineering Co. (Ltd), Aberdeen; R. G. Garvie & Sons, Aberdeen; Marshall, Sons, & Co. (Ltd), Gainsborough, and Garvie, Innes, & Scott, Aberdeen.

Dairy requisites
Utensils for the dairy form an important department of the section. The Alfa-Laval Co. (Ltd), London, show their noted milking machine together with a new model of the Alfa-Baby machine which embodies all the features and advantages of the senior installation. There are also a variety of cream separators. The latter utensil is likewise exhibited in varying capabilities by the Wolseley Sheep Shearing Machine Co. (Ltd), Birmingham. On the stand of Messrs Barford & Perkins (Ltd), Peterborough (no. 38), is to be seen a complete model dairy as well as the “Cleena-Milk” sterilizing outfits, pasteurisers, &c. Cream separators, refrigerators, petrol engines are shown by Messrs R. A. Lister & Co. (Ltd), Dursley, while the new Wallace milking machines is shown by Messrs J. & R. Wallace, The Foundry, Castle Douglas.”

Quite a selection of names and implements and machines!