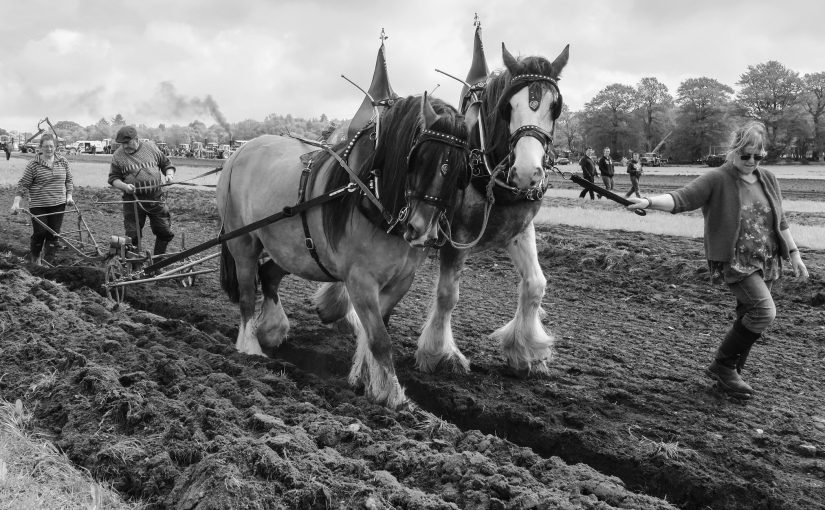 Henry Home, Lord Kaimes could be regarded as the most prominent agricultural writer of the eighteen the century. His “The Gentleman Farmer: being an attempt to improve agriculture, by subjecting it to the test of rational principles”, first published in 1776, was a best seller and went through six editions into the early 1800s.

Kaimes includes descriptions of the most widely used agricultural implements and machines. He was both positive but also critical of them. He made suggestions on how they could be improved.

Kaimes provided an extensive account of the ploughs used in Scotland. It is worth quoting at length to show some of the recent history of that important implement:

“This is the most useful implement that ever was invented. It is of more use than even the spinning wheel: for men may make a shift for clo[a]thing without that instrument, but a country cannot be populous without the plough.

The only plough used in Scotland, till of late, is a strong instrument, about thirteen feet from the handles to the extremity of the beam, and commonly above four feet from the back end of the head to the point of the sock. It is termed the Scotch plough, to distinguish it from other forms; and it needs no particular description, as it may be seen in every field. It may well be termed the Scotch Plough; for of all forms it is the fittest for breaking up stiff and rough land, especially where stones abound; and no less fit for strong clays hardened by drought. The length of its head gives it a firm hold of the ground: its weight prevents it from being thrown out by stones: the length of the handles gives the ploughman great command to direct its motion: and by the length of its head, and of its mouldboard, it lays the furrow-slice cleverly over.

The Scotch plough was contrived during the infancy of agriculture, and was well contrived: in the soils above described, it has not an equal. But in tender soil it is improper, because it adds greatly to the expense of ploughing, without any counterbalancing benefit. The length of the head and mouldboard encrease the friction, and consequently it requires a greater number of oxen or horses than are necessary in a shorter plough. There is another particular in its form, that resists the draught: the mouldboard makes an angle with the sock, instead of making a line with it gently curving backward. There is an objection against it no less solid, that it does not stir the ground perfectly: the hinder part of the wrist rises a foot above the sole of the head; and the earth that lies immediately below the hinder part, is left unstirred. This is ribbing land below the surface, similar to what is done by ignorant farmers on the surface. These defects must be submitted to in a soil that requires a strong heavy plough; but may be avoided in a cultivated soil by a plough differently constructed. Of all the ploughs fitted for a cultivated soil free of stones, I boldly recommend a plough introduced into Scotland about twelve years ago, by James Small in Blackadder Mount, Berwickshire: which is now in general request; and with great reason, as it avoids all the defects of the Scotch plough. The shortness of its head and of its mouldboard lessen the friction greatly: from the point of the sock to the back part of the head it is only thirty inches; and the whole length, from the point of the beam to the end of the handles, between eight and nine feet. The sock and mouldboard make one line gently curving; and consequently gather no earth. Instead of a wrist, the under edge of the mouldboard is in one plain with the sole of the head; which makes a wide furrow; without leaving any part unstirred. It is termed the chain-plough, because it is drawn by an iron chain fixed to the back part of the beam immediately before the coulter. This has two advantages: first, by means of a muzzle it makes the plough go deep, or shallow; and, next, it stresses the beam less than if fixed to the point, and therefore a slender beam is sufficient. This plough may well be considered as a capital improvement, not only by saving expence, but by making better work. It is proper for loams, for carse clays, and, in general, for every sort of tender soil free of stones. It is even proper for opening up pasture ground, where the soil has been formerly well cultivated.To finish an account of the plough, I must add a word about the sock. A spiked sock is used in the Scotch plough, and is essential in stony land. But a feathered sock ought always to be used in tender soil, free of stones: it cuts the earth in the furrow, and makes neat work. It is indispensable in ground where roots abound, as it cuts them below the surface, and prevents their growing. I esteem the feathered sock to be a valuable improvement.

The industrious farmer would even borrow money to clear his ground of stones, in order to introduce it: in a twenty-years lease, the profit of it would pay the expence tenfold.

Some ploughs are made with two small wheels running in the furrow, in order to take off the friction of the head; and this plough is recommended in a book, intitled, The complete farmer. But all complicated ploughs are baubles, and this as much as any. The pivots of such wheels are always going wrong; and beside, they are choked so with earth, as to increase the friction instead of diminishing it. If we look back thirty years, ploughs of different constructions did not enter into a dream. The Scotch plough was universally used, and no other was known. There was no less ignorance as to the number of cattle necessary for this plough. In the south of Scotland, six oxen and two horses were universal, and in the north, ten oxen, sometimes twelve. The first attempt to lessen the number of oxen, was in Berwickshire. The low part of that country abounds with stone, clay, and marl, the most substantial of all manures, which had been long used by one or two gentlemen. About twenty-five years ago it acquired reputation, and spready rapidly. As two horses and two oxen were employed in every marl-cart, the farmer, in summer fallowing and in preparing land for marl, was confined to four oxen and two horses.

And as that manure afforded plenty of sufficient straw for oxen, the farmer was surprised to find, that four oxen did better now than six formerly. Marling, however, a laborious work, proceeded slowly, till people were taught by a noted farmer in that country, what industry can perform by means of power properly applied. It was reckoned a mighty talk to marl five or six acres in a year. That gentleman, by plenty of red clover for his working cattle, accomplished the marling fifty acres in a summer, once fifty-four. Having so much occasion for oxen, he tried with success two oxen and two horses in a plough; and that practice became general in Berwickshire. Now here appears with lustre the advantage of the chain plough. The great friction occasioned in the Scotch plough by a long head, and by the angle it makes with the mould board, necessarily requires two oxen and two horses, whatever the soil be. The friction is so much less in the chain plough, that two good horses are found sufficient in every soil that is proper for it. And as good luck seldom comes alone more than bad, the reducing the draught to a couple of horses has another advantage, that of rendering a driver unnecessary; no slight saving at present, where a servant’s wages and maintenance are very smart articles. This saving on every plough, where two horses and two oxen were formerly used, will be the strictest computation be fifteen pounds sterling yearly; and where four horses were used, no less than twenty pounds sterling. There is now scarce to be seen in the low county of Berwickshire a plough with more than two horses; which undoubtedly in time will become general. I know but of one further improvement, that of using two oxen instead of two horses. That draught has been employed with success in several places; and the saving is so great, that it must force its way every where. I boldly affirm, that no soil stirred in a proper season, can ever require no more than two horses and two oxen, in a plough, even supposing the stiffest clay. In all other soils, two good horses, or two good oxen abreast, may be relied on for every operation of the chain plough.

A chain plough of a smaller size than ordinary, drawn by a single horse, is of all the most proper for horse ploughing, supposing the land to be mellow, which it ought to be for that operation. It is sufficient for making furrows to receive the dung, for ploughing the drills after dunging, and for hoeing the crop.

A still smaller plough of the same kind, I warmly recommend for a kitchen garden. It can be reduced to the smallest size, by being made of iron; and where the land is properly dressed for a kitchen-garden, and iron plough drawn by a horse of the smallest size will save much spade work. Strange is the effect of custom without thought! Thirty years ago, a kitchen-garden was an article of luxury merely, because at that time there could be no cheaper food than oat-meal. At present, the farmer maintains his servants at double expence, as the price of oat meal is doubled; and yet he has no notion of a kitchen garden, more than he had thirty years ago. He never thinks, that living partly on cabbage, kail, turnip, carrot, would save much oat meal: nor does he ever think, that change of food is more wholesome, than vegetables alone, or oat-meal alone. I need not recommend potatoes, which in our late scanty crops of corn have proved a great blessing: without them the labouring poor would frequently have been reduced to a starving condition.” What do you think of Kaimes’ account of the plough?