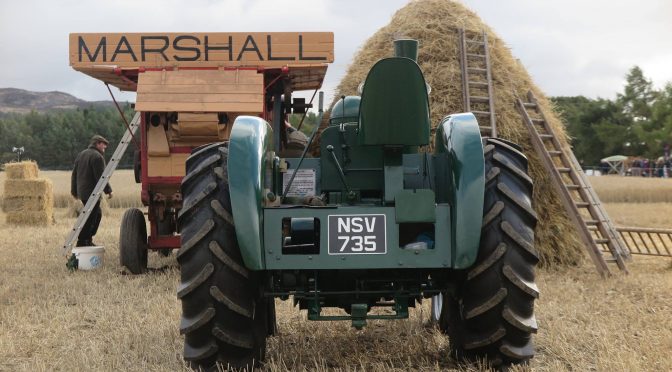 James Headrick wrote a detailed account of the agriculture of Angus for the Board of Agriculture and internal Improvement in 1813. He included an account of threshing mills and their use in that county. It makes for interesting reading: 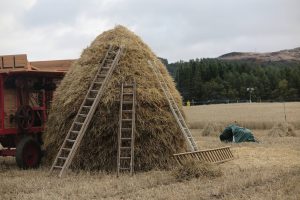 “These are now very general in this county, on all corn farms which exceed a hundred acres in extent. When the flail is used for separating the corn from the straw, the barman gets one boll in twenty-one without, or one boll in twenty-five with, one meal a-day. But the threshing milll excels in expedition, and its superiority in point of clean threshing is such, that the barman’s allowance is supposed to be more than saved by employing it. Many attempts were made to construct threshing mills, on various principles; but the one which has succeeded best, and which, with only one exception, is universally used here, is that which was invented by Mr Meikle, when he was employed in constructing 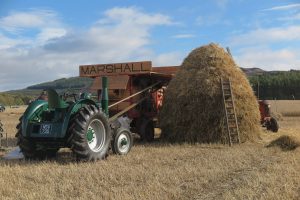 machinery by the late Mr James Stein, distiller at Kilbagie, near Clackmannan. This machine is so very common, that all description of it seems unnecessary. In this county threshing mills are commonly moved by horses; but where opportunity occurs, water is always preferred. A few of them are moved by wind, and there may be one or two near the coast moved by steam. The latter are used for grinding, as well as threshing corn.
Many attempts have been made to construct threshing mills with a one-horse power, so as to accommodate small farms. But these machines have not hitherto proved efficient with less than a four-horse power; and the generality of then in this county, are moved by six horses; or by a power equal to their strength. Such machines cost from about L140 to L180. 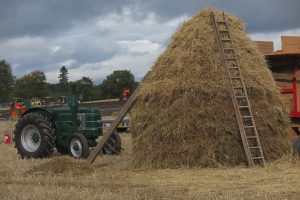 An artist at Arbroath has lately introduced into that neighbourhood, a threshing machine which is moved by two horses, and seems to do the work very well; only it does not thrash so much as a four, or six horse , machine, in a given time. In his machine, the length of the drum, or trundle, to which the beaters are fixed, is diminished, so that they cannot take in more corn at a time, than is proportioned to the power of two horses. The wheels and moving powers are all of cast iron, and it is merely Meikle’s machine reduced in its dimensions. This machine costs from L50 to L60. It seems probable, that by a still farther contraction of the drum, or trundle, these machines may be made to do sufficient work with one horse, or even with any inferior power; but it must be understood, that the quantity threshed in a given time, must always be proportioned to the original power applied. Thus Mr Meikle’s mill may be accommodated to small farms. 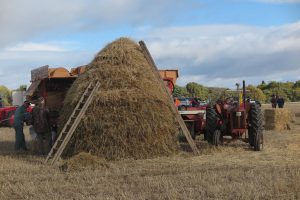 The ingenious Mr Stirling at Howmuir, near Forfar, had adopted a threshing mill, which bids fair to succeed on small farms. It was first invented in the neighbourhood of Dunblane, and the mode by which it is put in motion is exactly the same with that by which small corn mills are moved in the district of Uig, Island of Lewis, and in some other Hebridean Isles. It consists of a perpendicular shaft or axle, moveable on a pivot below, and having another pivot inserted intoa box in the upper part of the building. This upright shaft may be about twenty-five or thirty feet long, according to the height of the water-fall which puts the machine in motion. On the lower part of this shaft there is fastened a trundle of cast iron, about three feet, or two and a half diameter, which has thin and broad leaves extending from its centre to the rim which incloses their extremities. These leaves are bent, so as to make an angel of 45 degrees with the horizon, this being the angle by which the water is 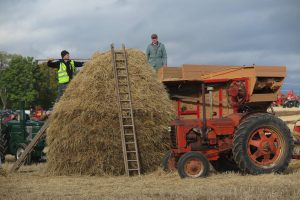 projected against them; and thus the water falls perpendicular to their surface. The water is conducted down a wooden spout, nearly perpendicular, from an elevation of eighteen or twenty feet and by striking against the leaves of the trundle, puts it, and the upright shaft fixed in its centre, into very rapid motion. Upon the floor through each the upright shaft rises, there is placed a circular wooden trough, about three or four feet high, and from eight to ten feet in diameter. Within this, four cross bars or levers, strongly fastened to the upright shaft, at right angles to each other, are swung round by the motion of the shaft round its axis. These are every way very similar to the scatters 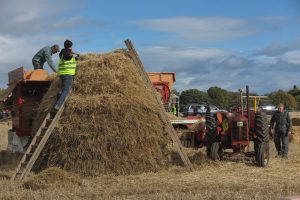 by which lint is dressed. A square aperture through the top of this trough, lined with sheet iron, admits the sheaves to be thrust down by the hand, and the corn is quickly knocked off by the scutchers, which are swung rapidly round. The straw drops down upon a wooden hack, or brander, in the bottom of the trough, where it is tossed round by a wooden lever, provided with a few iron spikes, until it drops the corn; and then it is thrown out at an oblique opening in the side of the trough. What passes through the brander, descends by an inclined plane, upon a riddling machine, which throws aside chips of straw, and coarse chaff. It then passes through the fanners, which are moved by the machinery; and being riddled and passed through the fanners a second time, the grain is ready for the market.
One disadvantage of this machine is, that the sheaf is not struck with the same force at all points, as happens with Mr Meikle’s horizontal knockers. For the velocity at different points of the scatters, being as the squares of they distances from the centre of motion, it is evident that the outside of the sheaf will be more forcible struck, than the parts nearer the centre. Another disadvantage is, that they have not yet contrived to make the machine feed itself; and feeding with the hand is subject to inequalities, sometimes the machine having too much, and 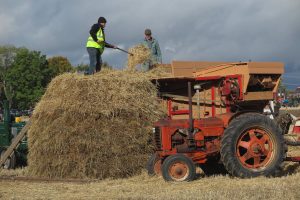 sometimes too little. It seems, however, to answer well for threshing oats and barley; but it is not so well adapted for wheat. Perhaps this might be remedied, were a method found of making the machine feed itself. The whole expense of the machinery in this instrument does not exceed L20; but there must be a house built for it, at the bottom of a declivity, over which a fall of water can be brought, of from eighteen to twenty feet perpendicular altitude.”

The photographs of threshing were taken at the Daviot vintage rally, October 2018.