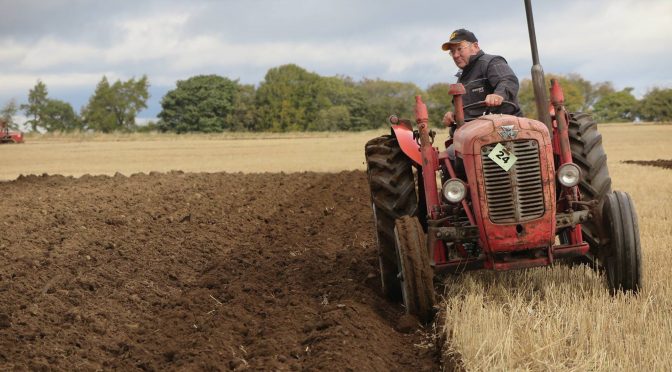 The county agricultural surveys contain a lot of detail about agricultural implements and machines. The account of Perthshire, written by James Robertson, includes the following account of ploughs and ploughing: 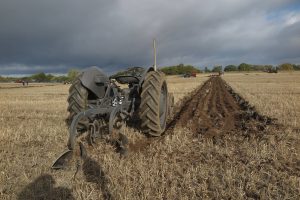 “The plough, used by many of the most knowing farmers, is that with the chain and curved old-baord generally of cast iron. Some very intelligent farmers, about the east bridge of Earn, reject the chain, but strengthen the beam with two lateral bars of iron, from the muzzle back to the great stilt or handle of the plough.
In Monteith some of the best farmers make use of an improved small Scotch plough, in preference to that with the cast iron old board invented by Mr Small at Ford, both on account of its lightness, and because it does not throw the furrow of clay land so much on its back. In stony land, the round share is most in use; in land, which is free of stones, the feathered share is preferred, on account of the 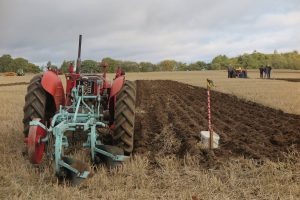 neatness of the furrow; and indeed in tough or new land, no other share will cut the roots of grass and weeds, or turn over the surface, with the same ease or equal beauty.
The Scots plough is recommended by the Board of Agriculture, upon which the whole seems to be the most generally useful, that has hitherto been invented.
These four kinds of ploughs are drawn each by two horses; but in a great part of the country to which they account refers, the old Scotch plough, drawn by three or four horses, is still in use: and in some places the barbarous custom is not exploded, of yoking four horses a breast, and of driving them by a man going backward/ This practice appears very awkward and very much poaches the ground; 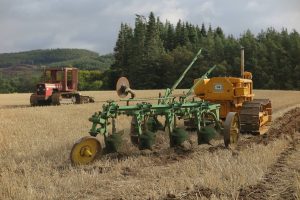 yet they contend in their own defence, that the horses yoked in this manner act with greater power than otherwise; that the ground is in many places so full of large stones, are not to admit the long plough; that the driver, by having his eye at once on the horses and plough, can stop the draught more instantaneously and save the harness (gratis) better than in any other position; that they are under the necessity of keeping small horses, adapted to their pasture in the moors, and require more of 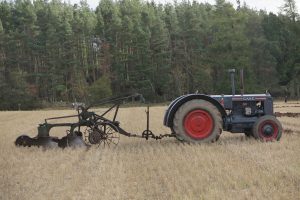 them to execute the labour of a plough-gate of land. It is to be hoped, however, that by the increasing cultivation of sown grasses, their food for horses and other cattle will be more abundant; that a breed of larger horses will be employed; that two horse ploughs will be made use of, and all arguments in defence of horses yoked arrest become unnecessary. The saving in point of harness and horses, besides having only one man in place of two, is so great and so evident, in favour of two horse ploughs, that they are fast gaining ground, in every district of the county, and it is hoped will soon be universal.”

The photographs were taken at Strathnairn Vintage Rally, October 2018.