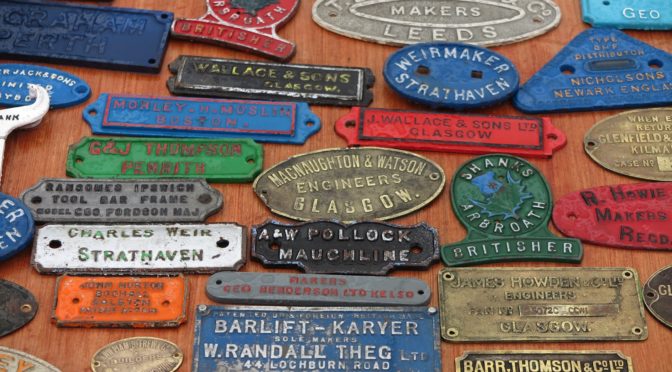 As it would have been the time of the Highland Show, let’s look back at past shows and the implements and machines exhibited at them.

The Highland Show was an important forum for the exhibition of implements and machines made by Scottish and other makers, usually from England. It gave makers an opportunity to see what they were making, what was their latest developments and innovations. It allowed makers to reach a large audience, especially if they were coming from a distance to the show.

Before 1860 the Highland Show travelled around Scotland in turn to each of the teight show districts. In1865 the Show was at Inverness, the Show District for the north of Scotland and surrounding area. The largest number of the implement and machinery exhibitors were from this and neighbouring Show Districts. However, there were also others who came from a much wider area of Scotland, looking to expand their customer base and show what they had to offer. These makers included some of the well-known and renowned makers who had a reputation throughout Scotland. There were some English makers, but they had a considerable distance to travel to the show.

The exhibition of implements and machines at the Highland Show was widely reported in the local, regional and agricultural press. This is what the North British Agriculturist, the major Scottish newspaper wrote about the Inverness Show in 1865:

“Implement department
The implement department is not imposing, there being none of the complicated and more expensive machines which are so attractive to the ordinary visitor. There is no machinery in motion. The articles are arranged in rows, part being displayed under wooden sheds, and part without any protection. The more eminent English makers are not patronising the present exhibition of the Highland Society. Doubtless the distance from the seat of their manufacturers, and the number of orders which still remain unexecuted, are the causes which have influenced implement makers in withholding contributions to the present show. There are, however, in several of the stands implement and machines from English manufacturers. It does not argue well for the estimation in which the farming of the north of Scotland is held that there is only one portable steam-engine in the yard, exhibited by Williamson Brothers, Canal Iron Works, Kendal, who also exhibit a combined thrashing machine, a turbine water wheel, and a centrifugal pump. The implements which are shown in the greatest numbers are ploughs, harrows, and reaping machines. Mr Allan, Culthill, Dunkeld, shows several well constructed ploughs and horse shows, with two turnip sowing machines.
Messrs Brigham & Bickerton, Berwick, exhibit several of their well-known excellent reaping-machines. Messrs Jack & Son, Maybole, show a Hussey’s reaper, a Buckeye combined reaper and mower, and other articles. Messrs Law, Duncan & Co., Shettleston, have a potato-digger, a patent reaping-machine, a subsoil plough, &c. Sir John P. Ord of Kilmory, Bart, shows a horse collar made of bent grass, and matting of the same material-both very cheap and good. Mr Rawdin, Jedburgh, exhibits dipping tubs for dressing sheep. Mr John Richardson shows specimens of his well-known fanners. Riches & Watts, Norwich, an American grist and corn-grinding mill. Messrs Richmond & Chandler, Manchester, have an excellent assortment of chaff-cutters and other food-preparing machines, which are now, we are glad to say, being better understood and appreciated by farmers in Scotland. Mr Ross, Cullen, shows a very good plough and turnip-sowing machine. The Singer Manufacturing Co., Dundee, exhibit several sewing machines. Mr W. Kennedy, 182 Princes Street, Edinburgh, shows a splendid collection of these useful and popular articles.

How many of the names of the exhibitors do you still recognise?

The photographs were taken at rallies in recent years.