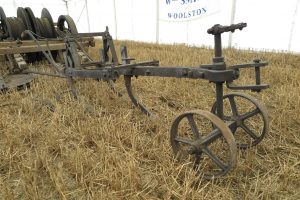 If you were a farmer in Scotland in the mid 1850s you may have been interested in the latest developments in steam cultivation. In April 1853 members of the Fisken family demonstrated their water and steam plough on the farm of Drumphin, parish of Wester Foulis, Perthshire. Further exhitions were held in following years, as before the Stirling Agricultural Association in August 1856. 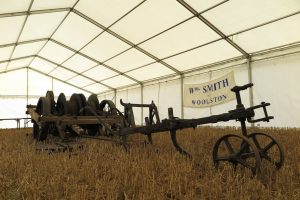 But it was a machine developed by an English farmer, William Smith of Woolston, near Bletchley Park, Buckinghamshire, whose steam cultivator was the first one that came into commercial production that was used by Scottish farmers (there were others such as Boydell’s). Smith’s design was a simple one. As the Perthshire advertiser states in 1856: 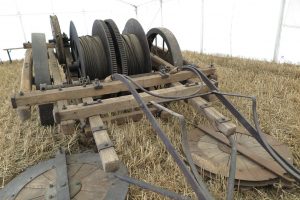 “[Mr Smith] works his implements by men’s of a common seven-horse portable engine and a stationary windlass, fixed at one corner of a field. A couple of wire ropes are led from two drums on the windlass in opposite directions round four anchored pulleys, and meet at the implement, thus passing all round the field-two anchors being fixed and two shifted from time to time along each headland as the ploughing proceeds. The anchors are like large four-toothed rakes, and it requires a man at each end of the work to dig holes and shift them forward, Mr Smith uses cultivators of a peculiar kind, taking about three feet breadth at a time; and he has an ingenious and quick mode of turningthem at the end of the furrow. He is able to scarift or baulk plough on an average four acres per day of twelve hours.” 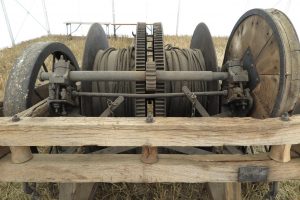 Smith leased out production of his steam cultivator to a number of different engineering companies between 1857 and 1871. Between 1859 and 1861, they included J. & F. Howard, Bedford. By 1958 the Edinburgh Evening Courant could note that “the two really competing inventions are Howard’s (of Bedford) windlass and wire-rope cultivator (on the system of Mr Smith, of Woolston), and Fowler’s steam plough”.

Smith advertised his tackle in the Scottish press, including the Aberdeenshire and Perthshire newspapers in 1858, and in the North British Agriculturist in the following year. When smith transferred production to J. & F. Howard, that eminent company started to advertise Smith’s tackle, sometimes with its own manufactures, and at other times on its own. Its advertising started in 1860 and continued in 1861. 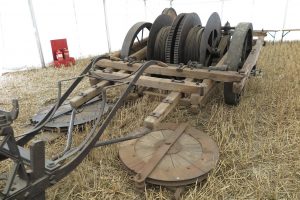 Howard bought out the production of Smith’s tackle, making its own improvements to it. Howard started to manufacture its own “Howard’s new patent steam cultivators”, which it continued to advertise until 1865. In time Howard developed its own steam cultivation engine and tackle, based on Smith’s cultivator. This was launched in 1876. 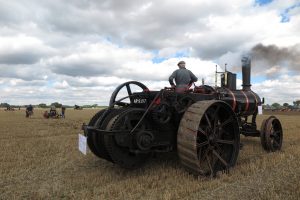 J. & F. Howard was a prolific advertiser of its steam ploughing tackle in the Scottish agricultural press between 1859 to 1881. Its early adverts focused on the number of sets of tackle that it had sold, their geographical distribution, and the advantages of the systems.
Scottish farmers used both Smith’s system and Howard’s system. The Marquis of Stafford (later the Duke of Sutherland) used “Smith’s steam plough, manufactured by J. & F. Howard, Bedford” at New 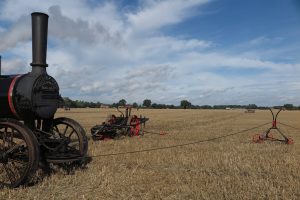 Tarbat in 1858 (in the following year there were 40 sets at work in England). Howard’s tackle was more widely used. In August 1861 the Scottish Farmer reported that some “four or five sets of Howard’s steam tackle for ploughing or cultivating that have yet found their way into Scotland”. In 1862 the first set of ploughing tackle introduced into East Lothian, by Mr Sadler of Ferrygate, was a set of Howard’s. Its introduction was widely celebrated.

The steam ploughs of John Fowler, later John Fowler & Co. (Leeds) Ltd, also made a significant contribution to the steam ploughing and cultivation scene in Scotland, and came to dominate it. That is for another day.

The William Smith of Woolston tackle and the Howard’s farmer’s engine and round-about tackle were exhibited at the World Ploughing Championships, September 2016.