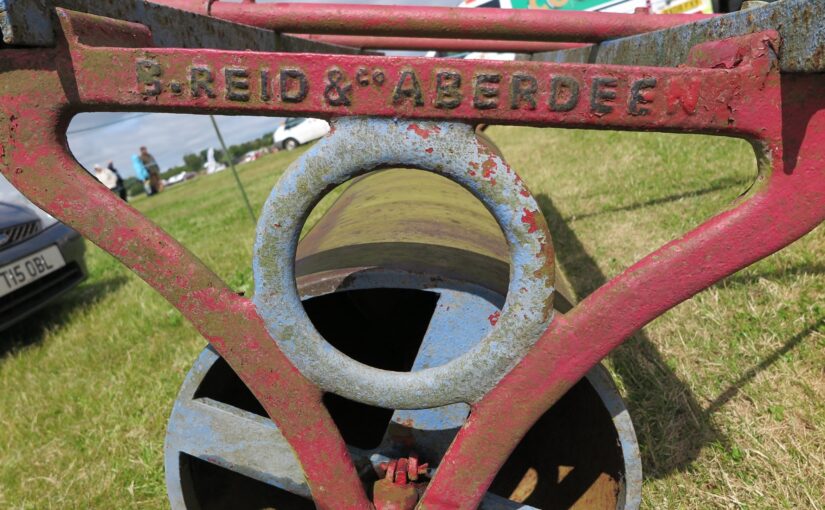 What a roll-call of makers under the letter r! We have focused on some of the major makers in previous posts. We will look at some of the names that we haven’t featured much or at all.

D. Ritchie, Whitehills, Forfar, is first recorded as advertising in the Scottish Farmer on 8 February 1930. By 1933, the first year that it exhibited at the Royal Highland Show, the company was known as David Ritchie & Sons, Whitehills, Forfar, Angus. A further change in the organisation of the company took place in 1954 so that it became a company limited by guarantee as David Ritchie (Implements) ltd, Whitehills. It manufactured and sold a variety of agricultural implements and machines.

John Robertson, Conon Bridge, Ross-shire was an implement maker and smith, who continued in business until May 1926 when he was sequestrated. He was a maker and a patentee of implements and machines to harvest the grain crop.

Rollo Industries Ltd, St Andrew’s Works, Bonnybridge, Stirlingshire, was closely associated with the Rollo croftmaster tractor, invented by John M. Rollo and made by that company. It was entered as a new implement at the Highland Show in 1956. A year after the company started to exhibit at the show. The company petitioned to wind up in 2003.

Robertson & McLaren, is a name that is firmly associated with Stirling from 1920 until the mid 1950s. By the 1930s it described itself as agricultural engineers and dairy outfitters and later as agricultural and dairy engineers. In 1951 the company used the strapline “The farmer’s firm”. It was a maker of implements and machines as well as a dealer. As a maker it won a silver medal from the Royal Highland and Agricultural Society of Scotland for the ‘Victory hay ricker’ in 1921. Invented by Geo. Paterson, farmer, Wester Frew, Kippen, it was described as ‘a new implement for collecting and ricking hay’. It was an agent for makers such as Barford, Bentall and Bisset in 1948 and in 1952 for David Brown. It was a regular advertisier in the Scottish agricultural press. It only infrequently exhibited at the Highland Show, and usually only in the local show districts, though in 1951 it found its way to Aberdeen.

William Rae & Sons, Port Road, Inverurie was a local agricultural implement maker and manufacturer as well as mechanical engineer and smith who is recorded in agricultural directories from at least the early 1920s to the mid 1950s. He was most well-known as a maker of turnip sowing machines, harrows, and grubbers.

D. H. & F. Reid, Victoria Bridge, Ayr, Ayrshire, continued in business from around 1905 until the mid 1930s. While it described itself as engineers, it was also an agricultural engine manufacturer, and a millwright. Its business was largely a local one – it only exhibited at two Highland Shows, in 1914 in Hawick and 1919 in Edinburgh – though in the 1920s and 1930s it was a regular advertiser in the Scottish agricultural press, both the Scottish Framer and the North British Agriculturist.

A key part of its busines was acquired in 1912. On 4 July 1912 the North British Agriculturists notes that D. H. & F. Reid, engineers, Ayr, has acquired the goodwill of the oil engine and thrashing machine manufacturing business carried on in Annan by Eric Nicholson & Co. Ltd, Annan. They have removed the business to Ayr and are now manufacturing the Annan oil engines and thrashing machines at their works at Victoria Bridge, Ayr.