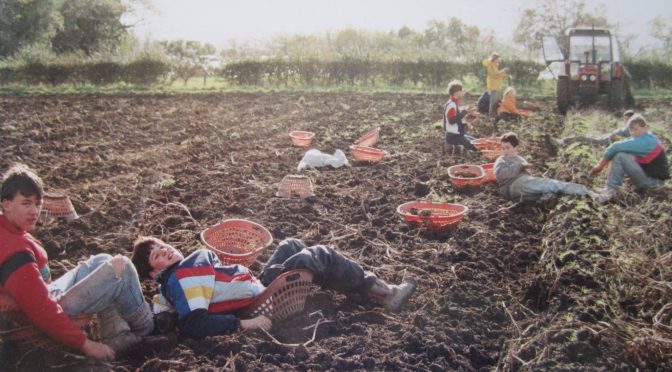 The tattle holidays are a well-recollected and remembered custom that took place in many rural districts.  However, there was another way in which children were released from school to help with the potato harvest.  This was by the “potato exemptions” or “tattie exemptions”.  They were just as important for releasing children from school attendance to work at the tattie harvest until 1962.

Whereas tattie holidays were given to all children in a school, or to certain years, tattie exemptions were given to individual children.  These children were permitted to leave school for a specified time while the school remained open.  They were usually given where there were fewer children employed at the tattle harvest, with other types of workers, such as locally employed women or Irish workers being more widely employed. 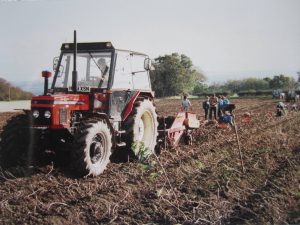 Schools and educational authorities often attached conditions to the granting of exemptions.  They included a high level of school attendance in the preceding year or evidence that the money from work at the tattle harvest would provide necessary financial assistance.  They ensured that the absence from school was both necessary and appropriate.

The ability to release individual children from school to engage in agricultural activities was permitted in legislation from 1878.  This was generally educational legislation, though legislation relating to the employment of children also had a role to play.

Exemptions were especially widely used during the Second World War when tatties were grown on an extensive scale and children were employed in large numbers throughout the country to harvest the crop.  With the end of the War and changes to the educational legislation in 1946 it was no longer possible to release children for work at the tattle harvest by means of the tattie exemptions.
Because of the important role that the children continued to play in harvesting the large acreages of crop, at a time when the food situation continued to be critical, special legislation had to be introduced that permitted their continued employment.  This was the Education (Exemptions) (Scotland) Act 1947.  It was an act to allow children over the age of 14 years to be released from school to assist in the tattle harvest.

The Act was a very hot potato.  There was widespread opposition from the educational authorities and educational unions at the continued employment of children at the tattie harvest.  Not all politicians were in favour of it.  Indeed, it was a politically very difficult act to bring forward.  So that it would get through Parliament it was designed as a short lived act, continued for one or two years at a time under the expiring laws continuance legislation. This approach ensured that the legislation was only used where there was a clear need for it. 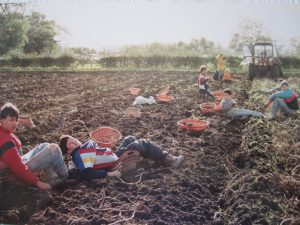 The Government continued to carefully monitor the food and labour situations as well as the development of a complete harvester which would bring to an end the need to exempt children for the tattle harvest.  But though the Act was to fall after 1949, there was a continued need for the continued us of tattie exemptions.  Indeed, in 1950 some 37,000 children were granted exemption over a three week period to work at the tattie harvest throughout Scotland.

In following years the annual debates in the Commons were hotly debated, and rarely in favour of the legislation.  The number of exemptions were carefully monitored and numbers of exemptions allocated to each education authority.

By the late 1950s farmers had to look for other sources of labour before they would be given the services of children.  Numbers of exemptions were cut dramatically.  By the late 1950s, the Government announced that 1962 would be the last year exemptions were given to Scottish schoolchildren.  Thereafter, farmers would have to look for their own labour.

The tattie exemptions were a very hot potato, and much more so than the tattie holidays.  But while they were hotly debated in Parliament, their continued need showed just how important the employment of school children was at the tattie harvest in a large number of counties of Scotland well after the end of the Second World War, and also when other war-time measures had come to an end.

The photographs shows a squad of children at Blair Mains, Culross, Fife in 1990. They were employed during the potato holidays.