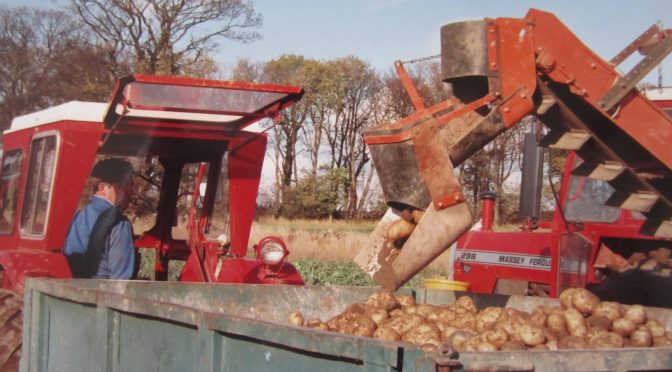 The 1950s was an important decade for the development of the complete or the mechanical potato harvester which could lift, sort and deliver potatoes into bags or into trailers.  If you were a Scottish farmer looking to purchase one of these harvesters you would have had to look to manufacturers outwith the country. 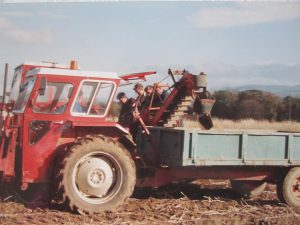 In 1952 makers included the Byfleet Machine & Tool Co. Ltd, of Byfleet, Surrey, with its tractor drawn “Thorn” potato harvester which put potatoes into a trailer.  Globe Harvester Co. Ltd, Wellington Road, Colney, had its tractor drawn “Globe” potato harvester which could deliver potato into bags or trailers.  Johnson (Engineering) Ltd, Elliot Road, March, Cambridgeshire had two models, its tractor drawn “Johnson” (worked by p-t-o or Petter engine drawn) and its “Johnson Junior”, p-t-o driven.  Mines Manufacturing Co. of Oxford, sold its “Minns” which could also be used for harvesting sugar-beet.  Modern Designs Ltd, Twyford, Berkshire, had the tractor drawn “Packman”, also powered either by p-t-o or engine driven. Root Harvesters Ltd, Fengate, Peterbough, sold the “Whistles”, a model that was among one of the well-known harvesters.  Wota Ltd, Wolverhampton had its “Wota-Crawford” tractor mounted machine.  Machines had an output of between 2-4 acres per day. 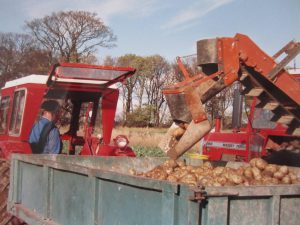 Despite the numbers of companies manufacturing complete harvesters by 1960, there were relatively small numbers working in Scotland. In 1960 in Fife there were 8 machines at work, while in Perthshire there were between 20-30 machines at work.  In 1961 in Aberdeenshire there were 28 machines in operation. In Angus there were at least 100 in operation.  Their number had increased rapidly in Fife, with 25 harvesters being used in 1961.  In Morayshire it was estimated that 40% of the crop was being harvested by machine.  There continued to be a further increased by the following year.  In the Lothians, one notable feature was the number of potato harvesters at work.  Mechanisation made important inroads into the potato field the 1960s. 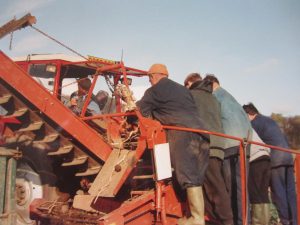 Why the sudden increase in the use of the complete harvester in the early 1960s?  While there were continued technical developments, an important source of labour, that of school children, was being substantilally reduced by the education authorities, with the aim of ceasing the release of children from school after the 1962 harvesters.  The situation forced farmers to look at their labour requirements, and the source of labour for the harvest.  While some farmers decided to stop growing potatoes, others ventured into mechanical harvesting as the way forward for securing the potato crop. It was a big step to take.