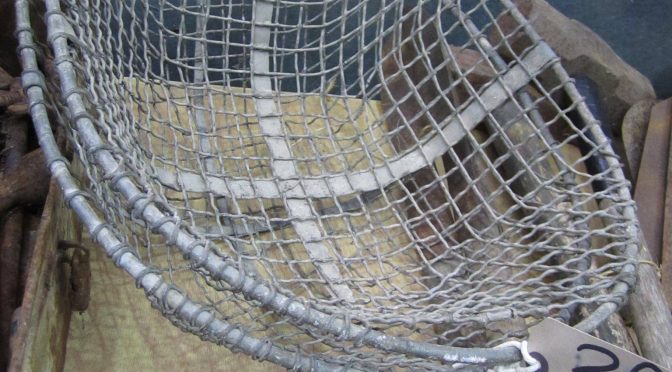 Agricultural implements and machines provide the greatest steps in mechanisation of tasks. But the role of sundries is often overlooked. They too could play an important role in making a task easier or more difficult to undertake. Just think about the baskets used for gathering tatties at the tattle harvest.

Do you remember the wooden spale baskets or “skulls” as they were often called? They were a great shape to “scoop” the potatoes from the ground. But the trouble with them was that soil easily adhered to their bottoms. So along with a stone of tatties you also had an additional stone of earth stuck to the bottom of the basket. And pulling it or dragging it along your stent of ground became ever-more tiresome as the day wore on. It became heavy work. 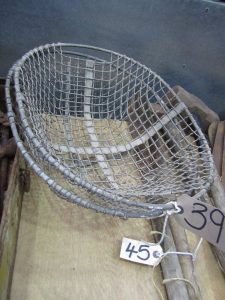 Then came the wire basket. What a difference they made to the job! They were a revolution! A lightweight basket that you could also easily scoop your tattoos into and lift! And they didn’t have the soil sticking to the bottom of the basket. But if you got one with a loose wire and caught your fingers on it, you soon knew about it. These baskets could be easily mended: a job for the winter months.

Then the plastic basket reigned supreme. They came in all shapes and sizes. There were ones that were the same oval shape as the wire baskets. There were ones that were the same shape as your mother’s washing basket. Then there were the ones in-between. Some were larger than others. There were the ones that the kids could sit as they waited on the digger coming up the drill in and pretend that they were in their own spacecraft or other imaginative vehicle. Some were better than others: the best were the shallow oval ones that were the same shape as the wire baskets. They were the right size: not too large, not too heavy, and held about the right amount of tatties in them. The soil didn’t stick to their bottoms too easily. If it did, you got a wee stone and scraped it off. One of their advantages was that if one of the tractors ran over them they bounced back in shape: the wire baskets were simply flattened. They didn’t need to be mended. You just phoned up the stores for more baskets.

The tattie baskets used in the tattle field played a key role in the experience of the workers or pickers in picking up the tatties from the ground. It had a significant impact on the efficiency of their work and the amount of effort they had to put into moving their basket on their stent. It also shaped their experiences of what the work was like. Just ask someone who has worked with spale baskets and plastic baskets.