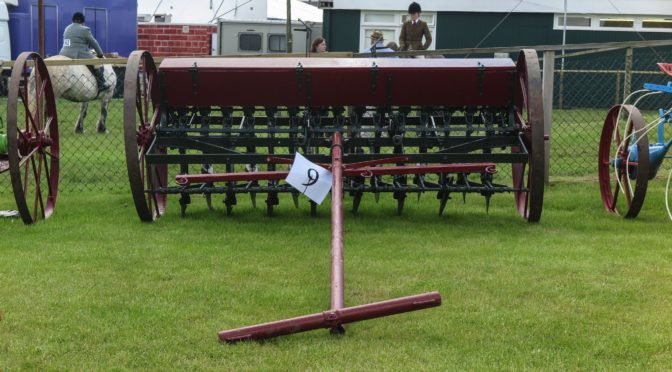 The year 1879 is an important year in Scottish agriculture. It marked the start if an agricultural depression that continued until the first decade of the twentieth century. It also marked the end of the “High period” of farming that had seen growth and development in Scottish and British farming. During theses decades Scottish farming had been revolutionised not only with the invention and development but also the widespread use of implements and machines, such as those relating to the grain harvest. The Scottish agricultural implement and machine making industry started to develop. A number of makers that were to continue their activities until the second half of the twentieth century became set up, grew and became well-known and well-established.

The Highland Show in 1879 was held in the Perth Show District, in Perth. An account of the show in the Dundee Courier notes the names and exhibitors of a number of implement and machine makers in central and north-eastern Scotland who were exhibiting at the show. Here is what the Courier noted of them:

Messrs J D Allan & Son, Dunkeld, exhibit at Stand 87 potato diggers, with improved spring lever lifter, and also improved reapers and ploughs and other implements, all of which are of a highly superior description.
A specimen of an American plough is to be found at Stand 135, which belongs to Mr Thomas Scott, Denny. The principal feature of this plough is that it is about a third lighter in draught than ordinary ploughs, while it is fitted with a sock which will serve a season without requiring repair. Mr Scott also exhibits a patent washing machine and an improved wringer, both of which are worthy the attention of heads of families, a wood reaping machine, and a number of other implements.
Messrs J. Bissett & Sons, Blairgowrie, exhibit, at Stalls 156 and 165, agricultural implements of every description and of the best class. Among the principal articles are the turnip lifter and a Scotia mower, fed with two speeds of knife instantaneously, and changeable improved gearing encased and apart from ground wheels.

Mr W. Macfarlane, Ardler, who occupies Stands 160 and 169, shows a great variety of agricultural implements, amongst which are reapers, horse rakes, and drill harrows. He also exhibits a new and improved threshing machine of English style, invented and made by himself, and which is a compact and handy machine for fixed or barn use. The machinery is all enclosed, so that the dust cannot get in, and farmers will find this thresher of a very suitable description. A vertical engine of 6 horse power for driving the machine is also on view, the engine and boiler being on the same base.

Mr R. G. Morton, Errol, exhibits an entirely new direct-acting, high speed threshing and dressing machine at Stand 186. This machine is suitable for either water or steam power. There are only three belts in connection with the machine, and these communicate the power direct from the engine. The machine, to which dust cannot enter, is fitted with Mr Morton’s patent lubricators, which can contain oil to serve for three days. Mr Morton also exhibits grist mills for grinding barley, Indian corn, &c. Wood’s reaper and binder, horticultural engine (fitted with patent lubricators); patent reaper, with Williamson’s back delivery, this reaper being a mower manual and self-deliverer combined, and being fitted with hinged finger-bar and double driving-wheels. The machine was commended at the Royal Northern Agricultural Show at Aberdeen.
At Stand 130 Robert Mitchell & Son, Peterhead, have a number of agricultural machines, amongst which we specially notice a couple of broadcast sowing machines for grain and grass seeds. The peculiarity of these is that the seed box is made in two divisions, and so constructed that each “swirls” round on a centre pivot at each side. The shortness of the half boxes keeps the fore end always at a distance from the horse’s head, and the whole thing is very portable and easily wrought, or stored when not in use. The boxes are of two lengths-18 and 14, the latter being specially suited for small holdings. Altogether, these sowers are likely to make their way with the farming fraternity. A number of rakes, grubbers, rollers, and ploughs at the same stand will repay inspection.

At Stand 139, George Sellar & Son, Huntly, exhibit a number of choice diggers, ploughs, harrows. Barclay & Sellar’s patent digger is now much used by the leading agriculturists in the north. It pulverises the lower part of the furrow slice, and turns over only the upper portion, leaving the roots of the weeds exposed to the winter’s frost, and the ground in a very friable condition. Stubble land cultivated by the digger does not require to be reploughed as it would do after the plough, but only requires to be harrowed in spring, and turnip land is left ready for the reception of the seed. Five of the ploughs at this stand are fitted with mould boards of an improved type, which were thoroughly tested last winter, and have proved very successful. The harrows are not fitted with bolts as usual, but have the tines driven firmly into the slots, thus forming a strong, simple, and durable article. The advantage of this style of harrow is that there is no danger of them shaking loose, and a farm servant can remove the tines when they require repair, and replace them again, without having to take down the whole harrow.

At Stand 158 (John Doe’s), Adamson & Co. of Dundee and Errol exhibit a very fine selection of agricultural drain tiles from 1 ½ inches to 14 inches in diameter, and also roofing tile, pressed brick, cut, and hardware. These are all being extensively used by agriculturists, and are entitled to practical patronage from farmers and others in want of such material, alike from their clean make and finished, yet substantial workmanship.”

These exhibitors included some well-known businesses that continued into the twentieth century. Some of their implements and machines can still be seen at rallies.

The photographs were taken at the Highland Show in 2019.