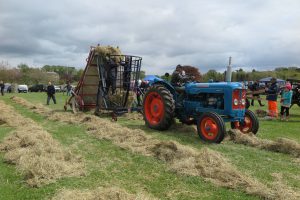 A few days ago we looked at ruck making or rick making.  Because of the hard work involved in making rucks attempts were made to mechanise the process. 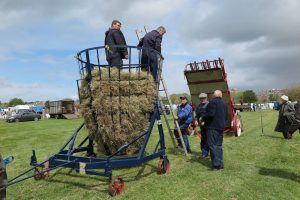 In 1921 Robertson & Mclaren, Craigmill, Stirling made their “Victory” had ricker.  It was invented by Geo. Paterson, farmer, Wester Frew, Kippen. It was described as “a new implement for collecting and ricking hay”.  It was exhibited at the Highland Show in 1921 and won a silver medal from the Royal Highland and Agricultural Society of Scotland.  It also received a good deal of attention in the agricultural press. 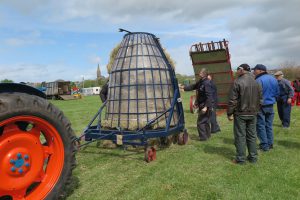 The hay ricker changed the shape and appearance of the hay fields in areas where it was used.  It was a favourite in the Carse of Stirling where large acreages of timothy were grown and the fields were flat.

The hay was made into windrows.  The ricker was then drawn over the rows.  It caught the hay with its revolving rakes, carrying it up an elevator and dropping it into a cage behind where a man (or two) tramped it down.  When the cage was well-filled the cage was turned right over, two doors at the back of the cage opened and a rick produced. 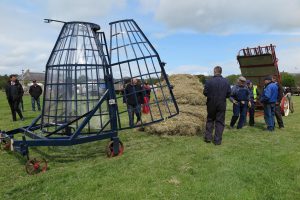 Hay rickers were used in some parts of Scotland and throughout Britain until well after the Second World War.  In 1952 you could obtain a “Mallard-Adams” from A. Adams, Langabeare Barton, Fatherly, Devon, or Rickerby Ltd, 33 Botchergate, Carlisle.

If you have been around the vintage rally fields in the past few years you will be familiar with Bill Allan’s Rickerby pike maker. (Pikes are a regional term for ricks or rucks).

The photographs show a demonstration of Bill’s pike maker at the Border Vintage Rally in May 2015. The ruck was then taken away with a hay sweep.