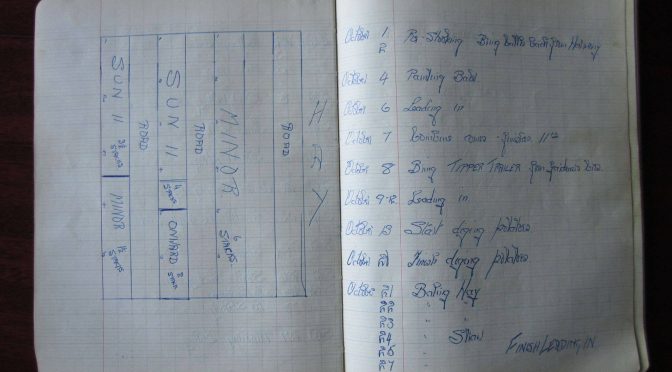 Did you ever keep a diary? Farmer’s diaries are a great resource for remembering the past and our agricultural history. They record a wide range of activities and events, including details of the weather (and especially backward seasons), tasks undertaken, the delivery of new implements and machines, and notable events that happened on the farm. Some diaries have short entries, while others are more descriptive.

My father kept a diary of his activities in western Midlothian in the 1950s and 1960s. It is straight to the point, having very short entries which describe exactly what he was doing and the key events on the farm: “painting baler”; “leading in”, “start digging potatoes”, and “finish digging potatoes”. 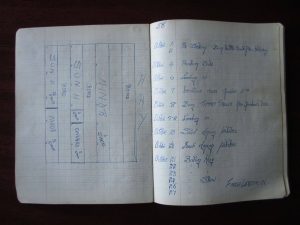 The diary is a helpful record for the use of particular implements and machines. His diary for October 1958 notes that he had a baler which he was painting on 4 October. It must have been new on the farm in that year as the harvest was being cut by both binder and combine harvester. Indeed, on 1 and 2 October my father was re-stooking grain, while on 7 October, “combine comes-finishes 11th”. He must have been using a contractor with a combine harvester as all the grain was cut by binder in the following year. It was one way to trial these new machines!

The entry for 8 November records that he was bringing a tipper trailer from Gardener’s Crescent. This was the Rosemount Works of Alexanders of Edinburgh Limited, one of the main machinery dealers that dealt with farmers to the west of Edinburgh, and in the Edinburgh area. Alexanders had started up as Alexander & Co. motor agents, in Lothian Road, Shandwick Place and Nottingham Place, Edinburgh, around the end of the First World War. It was a Ford agent, for both cars and tractors. It took part in the Highland and Agricultural Society of Scotland’s tractor trials in 1922 – marking it out as one of the early companies interested in tractors for the farm in Scotland. My father (and grandfather) used Alexander’s for many years after the last war: it had its dealer plate on the side of most of our Ford tractors, and we purchased a good deal of implements and machines from it as well.

The summer of 1958 was a backward one. October saw my father re-stooking sheaves in the early days of the month, combining in early October, as well as undertaking the usual task of digging the tatties. But the end of the month was spent baling hay and straw. leading the harvest was not completed until 25 October.

The diagram on the left hand page – that was a map of the stackyard with its roads and stacks. My father was meticulously working out how the year’s harvest was to be set out in the stackyard.
If you have a farming diary, have a look through it and see what it says about the farming practices and implements and machines that were being used in particular years. Its surprising the memories that come back. Even talk about the diary with the younger generations. I’m sure that the old diaries will come to have an even greater significance with them in bringing yesterday’s farming back to life.