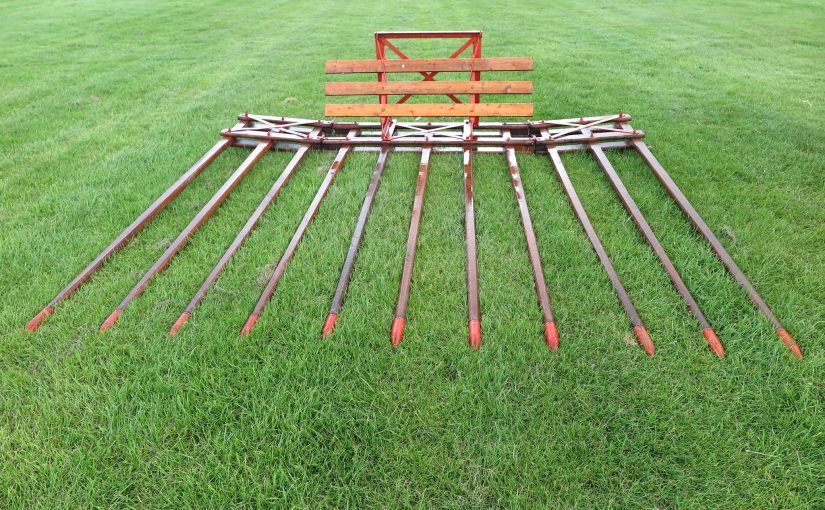 In the 1880s and the early 1890s there were significant improvements in the development of haymaking implements and machines win the Scottish hay field. These were to have a profound impact on the work undertaken for many decades.

John Speir of Newton Farm, Newton, wrote an article on these developments which was published in the North British Agriculturist on 5 June 1889. It describes these recent improvements and their significance. They followed an earlier series of articles from 1886. The article is quoted at length:

“Near the close of the year 1886, I wrote you a series of articles under the above heading, in which were described the construction, use, and advantages of the rick lifter, outside stacking horse fork, and inside or shed horse fork, on the American principle. Then the rick-lifter was in use only in isolated farms in the west, but nowhere else; the American shed form was in use on at least two farms in Ayrshire; while the horse fork, for ordinary ricks, was, as far as I know, only used by myself. The advantages gained by the use of these apparatuses are so great that they are doubling or quadrupling every year in the vicinity of Glasgow, where alone the rick-lifters and forks are made, and in a few years, I have no doubt, they will become as common with us as they are on American farms. In the south-west the growth of timothy as a hay crop has very much increased of recent years, and the stacking of such long, tough hay on many farms was almost the most severe work of the year, and work, besides, which could only be undertaken by strong, able-bodied men. Since the introduction of the rick-lifter and horse fork, not only is the work very much lighter, but each man will secure three times the hay he did before. As several improvement have been made in these machines since I last wrote you on this subject, I thought I might do worse than draw attention to them, seeing the haying season will soon be on us, and farmers will be beginning to consider whether or not they should invest in any of these apparatuses. A new rick-lifting apparatus has also been introduced, which, I expect will be useful in many situations where the expense of the ordinary lifter would be grudged.

The rick-lifter, as far as its main features are concerned, still remains the same, strength being, however, added to parts which were founded to be weak, and weight taken off other places found to be too strong. The best improvement which has been made is in the hauling-on apparatus, the roller of which, in the best class of lifters, is now placed across the front of the platform, but lower than it, whereas it was formerly always placed above the level of the platform. In the old pattern, whenever a large rick had to be lifted, and was drawn anything more than the usual length forward, so as to get the load balanced, the hay became entangled in the roller, and was a serious source of trouble where large ricks, or one having very wide bottoms, were being removed. Now, however, owing to the lowness of the roller, the rick can be drawn forward right over the top of it without ever becoming jammed. Owing to this improvement, the platform can be made much shorter than formerly, and yet be able to accommodate a larger rick; while the whole apparatus, being reduced in size, is more handy and serviceable. Combined malleable and cast-iron wheels, of a light yet strong and neat pattern, are now used by one of the Glasgow makers in preference to the solid wooden wheels used by some makers and the wooden spoked ones used by others. Nearly all makers now use a self-locking apparatus, so that whenever the platform drops down on the shafts its mechanically locks itself, and a handle at the near side of the shafts enables the driver to at once relieve the catch and tip up the load. The pawl of the ratchet wheel is now generally made to work above the lever instead of under it, which, though a minor and simple improvement, is also a very important one.

The above alterations have all been thoroughly tried and have been found to be real improvements, whereas there are several others which have been made, but have not been long enough tested to class them as improvements, or simply alterations or novelties. The most important of these is probably the use of a horse for hauling on the rick, instead of the manual power at present generally in use. This is attained in one system by attaching to the end of the roller a light grooved pulley about 3 feet in diameter and 3 or 4 inches broad, with a curved groove round the face. The other arrangements of the rick-lifter are the same as formerly, only the lever and ratchet wheel are dispensed with, and the end of the shaft is made square, and on which the large grooved pulley is temporarily fixed. The lifter having been put in position, and the ropes or chains fixed as for manual power, a rope 20 yards long or so is wound the large pulley, which is then slipped on the square end of the haulage roller. A horse is now yoked to one end of the rope on the large pulley, and when power is applied to it the rope is unwound while the rick is being hauled on to the platform. The rick having been drawn on, the pulley is taken off, and the rope rewound on it, when it is ready to be used on another rick-lifter, if used on the field. The principal difficulty of this arrangement appears to lie in the enormous distance the horse is from his draught when the rope has been unwound one or two times the circumference of the pulley, which, to have power, must be made large, otherwise the horse will be unable to haul the rick on. An improved modification of this arrangement is likely, however, to be tested this summer.

Another arrangement which has been tried consists of two sets of double pulleys, one set on each side of the rick-lifter. The rick-lifter having been placed in position, one block on each side is fixed to be a strong staple at the front of the platform. Both sets of blocks are then drawn as far asunder as possible, and connected by a short, stout rope behind the rick. The rope of each pair of blocks is then fixed to a plough tree, to which a horse is yoked, and the blocks, when drawn together, pull on the rick. Several ricks of from 15 to 16 cwt were loaded in this manner; but this system suffered the same as the one already described, in the horse being too far away from the load, and the hay at times blocking up the ropes in the pulleys. It had, therefore, to be discontinued, as being no improvement on the hand-lever presently in use. Another arrangement of pulleys has also been proposed, but as yet has not been practically tested the idea only existing in model. Models, however, are proverbial for working much better than full-grown machines.

In the present pattern of rick-lifter, all the levers work up and down like a pump handle. One maker has, however, made a change in this, and adopted a horizontal motion, similar to that of a ship captain. In this case the lever is also lengthened and the power increased, but as it has not yet been thoroughly tested, I am not prepared to say whether or not its adoption will be an improvement. A new style of rick-lifter was last summer made and exhaustively tried and found satisfactorily, a description of which I will reserve for another paper, as full details of it would make this one too long.

What a massive change to the hay field!