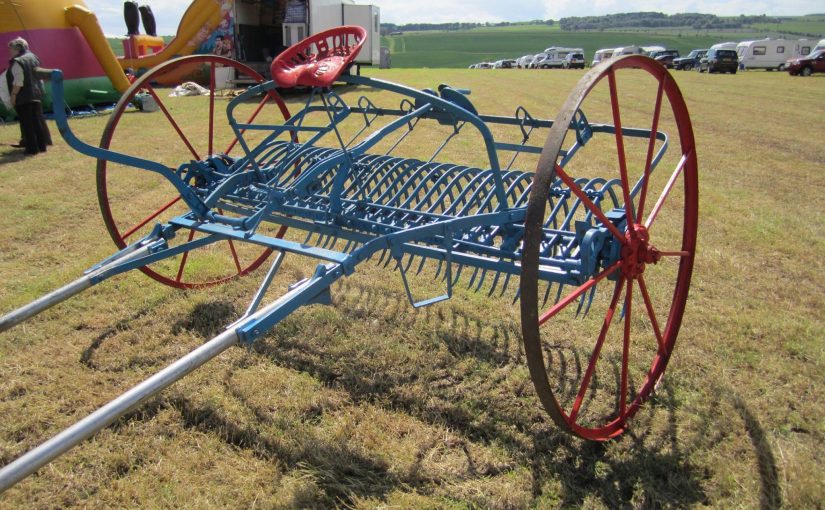 On 25 April 1914 the North British Agriculturist carried an article on haymaking machinery. It is worth quoting to see how that machinery has changed in the last century. It writes:

“The present spell of good weather has made all farmers busy, and it is surprising how rapidly the next two months will flit by, and the strenuous work of hay cutting and making occupies the farmer’s attention. In many cases the farmer is unprepared, and at the critical time he has arrears to make up in thinning his turnips, &c. This is especially the case when sowing has been delayed, as it was last year. Therefore, all the wet days that intervene between this and hay time should be utilised, at least in part, in making preparation for the approaching work. New machines are perhaps needed, and the old ones may need considerable renovation. It is far better to have everything ready a week before the time than be a matter of a few hours too late.

The hay-making machinery of the present day furnishes yet another example of the ingenuity which has been displayed in recent years in applying mechanics to the solution of the labour-saving problem. First and most important, comes the mowing machine, with which everyone is familiar. Care should be taken that the figers are all sound, and that the knife works without friction. Any faulty knives or those which show considerable signs of wear should be replaced. in fact, the whole machine should have a thorough overhauling, and the risk of breakdowns will be correspondingly small.

The small farmer will have little use for the other implements now so extensively used on large farms, excepting of course the horse rake. The swathe-turner, hay-tedder, hay-maker, &c, have however earned their places in the farm-steading equipment. The swathe-turner does away, to a great extent, with the necessity for thorough wedding, though in the practice prevalent in Scotland the swathes are both thoroughly turned and tended. By means of helically revolving prongs or blades the buttons of the swathes are lifted up from the ground and gradually pushed over, and in most cases two swathes are turned into the one windrow. In some machines three swathes are made into a row. The result is that the hay has a considerably increased chance of being better made. One great advantage is that the ground itself is left for the most part uncovered, and has thus a chance of thoroughly drying between the rows, which is conducive to the drying of the hay.

The hay maker and the hay tedder do away with any necessity for hand tossing in bad weather, though the former has often been accused of treating the hay badly. Preferably, the tedder should be used as it gives better results. In the making of the hay, however, in Scotland a rigorous use cannot be commended. The hard, dry, and sometimes over-ripe ryegrasses and clover are damaged, the former by having the stems ruthlessly broken, and much of the valuable clover seed is knocked on to the ground, as are also the fine leaved grasses. The wedding of the hay leaves it to the mercy of the weather, and also by covering the whole of the ground does not give the hay the advantage of drying winds, and reliance has to be placed on the power of the sun. If, however, the weather is muggy, and the hay still retains much of its sap, the weeding is certainly of the greatest advantage, as its action corresponds exactly to the hand tossing which is practised on similar occasions.

The first cycle of operations is completed by gathering all the hay into the rows prior to the making of the elementary rucks or ricks. The horse rake has now been resolved into a standard pattern, either self-acting or worked by the driver. The tines, which extend the whole distance between the two large ground wheels, are so shaped that on the lever being actuated the whole contents are discharged. each tine has a certain latitude, so that despite inequalities of the surface of the land, the tines scrape the soil or skim lightly at a little distance from it. A great improvement has been instituted in recent years by the introduction of the side-delivery rake, which gathers the hay into one long row and this militates against careless driving and inefficient working of the levers by a careless workman. It also is of much benefit in those years in which a heavy crop renders so frequent the tilting of the tines that the wear and tear on the machine is greatly increased. This difficulty is frequently encountered when the clover crop is beyond expectations, and when the conditions for thorough driving have not been of the best.

So, there are some elements that you will recognise, but others that have changed greatly as a result of changed husbandry practices and technologies.