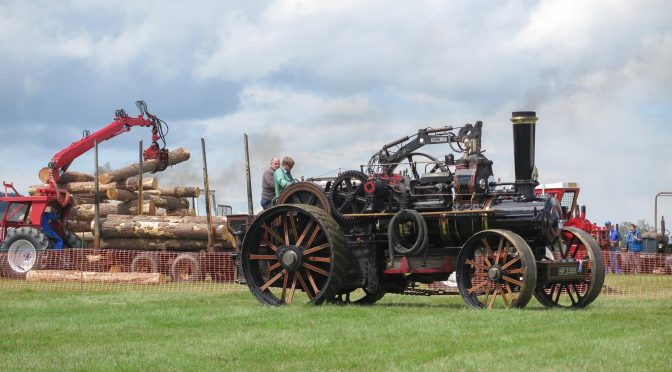 While farmers and agriculturists had significant difficulties farming by the end of the First World War, with increased acreages, dwindling supplies of male labour, a reduced number of horses, and a lack of progress in agricultural engineering, with implement and machine makers undertaking work for the government, there was an important revolution going on the farm. The move from horse and steam power to tractor power (whether paraffin or other fuels), brought an interesting interface in old and new technologies. 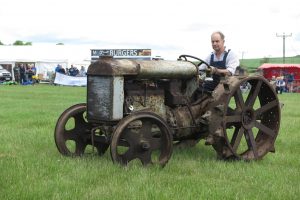 The national agricultural societies held their trials of tractors and implements over a number of years to assess their working capabilities and progress that was being made. They sometimes compared and contrasted the capabilities of the tractors along side the older steam power, which by that time was used to only a small extent to cultivate the land. But at the same time the steam ploughing and cultivating makers were also having a renaissance, and the second golden age of steam, through the award of the government contract to build a large number of ploughing engines (the exact number varies from source to source). The year 1918 was the “everest of the steam plough era”, in the words of Harold Bonnet. 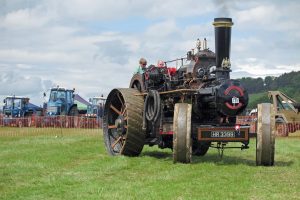 But the steam ploughing engine makers had their own challenges. The modern tractors were a challenge to this older technology. In 1917 J. & H. McLaren, Midland Engine Works, Leeds (John McLaren was from Perthshire, before moving south), started to vigorously advertise their steam ploughing tackle. Its adverts were sometimes placed alongside those for tractors such as the Mogul, providing a stark contrast in cultivation systems. Like the tractor makers, Mclaren also advertised their steam ploughing tackle in terms of practicability. It was “suitable for all kinds of crops” and “efficient simple durable”.

But as steam cultivation was an ageing technology, the makers looked towards the modern world of engines. McLaren developed a motor windlass cable ploughing tackle. It made its way into Scotland, both through the North British Agriculture, and its use in East Lothian. 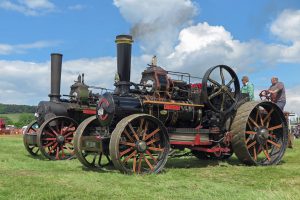 The North British Agriculturist carried news of a demonstration at Longniddry, East Lothian, where steam ploughing had been carried on for a number of decades. It stated: “More than ordinary interest is being aroused in the Longniddry district, Haddington, by ploughing on the cable system, which has been in operation for the past ten days at the Coates farm. This new departure in agricultural machinery is the invention of the well-known firm of agricultural engineers, Messrs J. & H. McLaren, Leeds, the object in view being to cultivate the land economically without injuring the soil by passing heavy bodies over it. The system is precisely the same as in the well-known “Double Engine System”, in which one engine is placed on each headland and the implement hauled backward and forward between them by means of steel ropes. In place of the heavy steam engine, however, on each headland, a light motor windlass is employed, worked by a petroleum or paraffin engine for hauling the cultivating implement-a system whereby the waste of fuel is obviated, as the one engine is stopped entirely while the other is pulling. The windlass is fitted with a four-cylinder internal combustion motor, of simple, strong, and efficient design, capable of rendering 32 horse-power when using 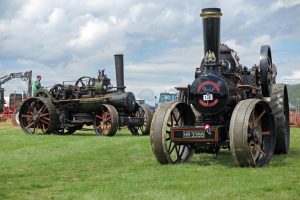 paraffin as fuel, and 40 horse-power when running on petrol. It starts up at first on petrol, is then switched over to paraffin, on which it runs the whole time when at work. each windlass after pulling the plough across the field is stopped after taking up its new headland position, and when the plough or implement is nearly across the field to the other side it is started by a patent re-starter actuated by the tail-rope. Each windlass is furnished with 450 yards of hard steel wire rope, and the design, by placing the motor near the front axle, and the windlass over the rear axle, combined with the rope pull from the centre, prevents any pulling sideways. The plough used is an improved four-furrow anti-balance plough fitted up with digger breasts, which breaks up the furrow making it like spade-work. The depth is regulated by means of a screw in the centre and a wheel attached to the top of the plough. The manufacturers claim that it is a much more suitable proposition than the tractor, which actually presses the land by its weight; also that its consumption of fuel is lighter. The quantity of fuel they estimate at three gallons per acre on heavy land, and two gallons per acre on lighter soils. 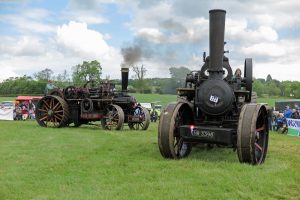 Three men are employed, one on each windlass and one on the implement. A field of 30 acres of stubble land has been completed-one of the strongest soils in the neighbourhood. It was ploughed 8 inches deep and completed in 5 1/2 short working days. The manner in which the head rigs have been ploughed is highly satisfactory, and Mr Black, farmer at Coates, and all who have witnessed the trial have been favourably impressed with the work accomplished.
At the trial demonstration on Thursday conditions were adversely affected by the intense frost, but the working of the windlass tackle was seen to be very simple. There was no difficulty in ploughing the hard, frosty land to a depth of eight inches, the digger breast breaking up the land and spreading it out well, though not so neatly as on the previous days when the keen frost was absent.
The motor windlasses are easily and quickly moved from field to field. They can also be used for transport purposes, either in the field or on the road, for hauling reapers and binders, and driving threshing mill or any other description of machinery by belt.”

An interesting period of using different means of power to enter a modern age in post First World Scotland.

The photpgraphs show the two concreting sides of agricultural motive power around the end of the First World War: a Fordson F from 1919 and a steam ploughing engine (“Master” from the pair “Master” and “Mistress”.

The photographs were taken at the Fife Vintage Agricultural Machinery rally, June 2017.