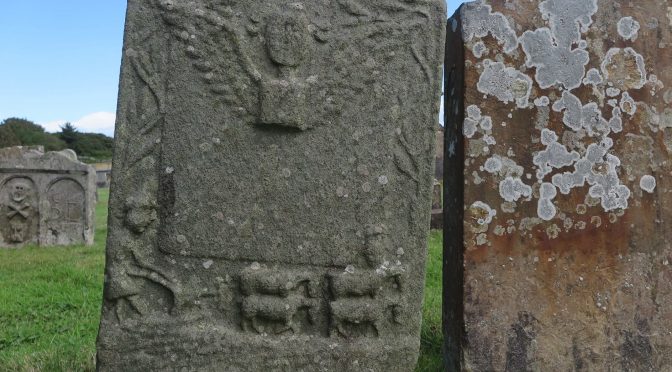 Headstones can provide a great deal of information about people and their past lives, of families and their relations and employment. Some of the older gravestones, especially from the seventeenth and eighteenth centuries, have elaborate decorations. These include pictures of rural life. 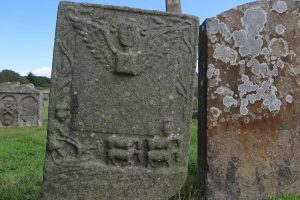 One such gravestone is at Skipness in Argyll. It includes an engraving of a plough team using the Old Scotch plough. This plough required to be pulled by a number of oxen, cows or other animals. In the gravestone the plough team comprises four oxen, working as two pairs. The plough would have been made of mouldboard. There is one ploughman (who looks like he is having to work hard). Usually there would have been another to help to guide the draught animals.

An account of the state of ploughs and ploughing in Ayrgyll is found in John Smith’s survey of Argyll for the Board of Agriculture in 1798. It notes that at that time there was a change in ploughing technologies from the old Scots plough to the improved Small’s plough made of iron. It is worth quoting at length:

“Many of the proprietors have all the instruments of husbandry in great perfection; and as cart and plough-wrights are now established in most parts of the county, the tenants are also getting better implements than what were in use formerly. Still, however, many of them make their own ploughs, but generally ina very rude and clumsy manner, tough they affect to say it is after the fashiopn of the old Scotch plough. The machine itself may often be allowed to be a moderate draught for one of their horses: but light ploughs (on the construction of Small’s) have of late been introduced among many of the farmers, as well as of the gentlemen, and answer well, except on some coarse lands, On most lands there may be drawn with ease by two ordinary horses; which is a prodigious saving to the farmer, and paves the way for laying aside the driver, as a very few have already done.
Mr Campbell, minister of Kilcalmonell, in Kintyre, has lately invented a plough, which, instead of a coaker, has an erect plate of iron connected with the sock. This invention of this contrivance is to strengthen the beam, and to keep the plough from being choked in stubble ground.”

Next time you are out in an old graveyard have a look to see if you can see any images of Scottish rural life on the headstones.

The photographs were taken at the small cenetary at Skipness, Kintyre in August 2018.