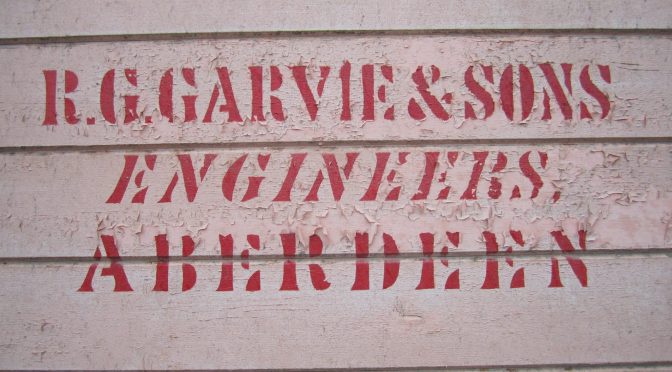 In January 1894 Robert G. Garvie announced that he had commenced his new business at Hardgate Iron Works, Aberdeen. Previously, for the last 17 years he had been the managing partner of Ben Reid & Co., Bon Accord Works. The Hardgate Iron Works were, according to him, “entirely new, and will, when finished, be fitted out with machinery of the most approved description.” He also planned to open a warehouse and showrooms at no. 13 Exchange Street.

Readers of this page will be aware of Garvie’s threshing mills. These were both mills on wheels – the travelling mills that went round farms – as well as static ones built into a steading. Having a new threshing mill installed on a farm was a big occasion. Some newspapers even recorded the installation of a new mill at a farm steading. This could be accompanied by a ceremonial threshing of the first sheaf, sometimes by a significant family member, or even a party with neighbours and others.

Newspapers in the Angus and Aberdeen areas recorded the erection of a number of new mills from the end of the First World War onwards. Here are some accounts.

In February 1919 the Aberdeen press and journal recorded the installation of a new threshing plant at Rothienorman:
“Mr Legge, Mill of Blackford, Rothienorman, has just installed a new threshing plant. It consists of a small petrol and paraffin engine, 3hp, complete with magnetic, by Messrs Fairbanks and Morse. The mill is 21 inches wide, with semi-high speed drum, patent shakers and blast. There are also elevators for lifting the oats into sacks, fitted by Mr Legge himself. The plant was fitted by Mr Garvie, Aberdeen, and is very neat and efficient in working.”

In October 1925, the Dundee courier recorded the installation of new threshing plant at an Aberfeldy farm:
“An interesting event took place at Lundan Farm, Aberfeldy, tenanted by Mr James Thomson, when there was put in motion a new threshing plant that has just been installed by Messrs R. G. Garvie & Sons, Aberdeen. The mill is at 3 feet 6 inches high speed drum, while the shakers are of the double crank pattern. The grain, after passing through the fanners, is carried to the grain loft by an elevator, and the mill is driven by a Fairbanks Morse engine. The mill was found to work most satisfactorily.

In March 1934 the Dundee courier noted the installation of new threshing plant in the Glencarse district:
“Up to date threshing plant has just been introduced at Inchyra Manor Farm, Glencarse, occupied by Messrs Alex and Albert Hutton.
The straw carrier conveys the straw along the loft to the flakes around the cattle courts, depositing it at intervals during the process, while the chaff is taken by means of a blast to either of the courts, regulation being possible by the turning of a switch.
The grain may be conveyed to a new granary or to the corn-room as desired. The machinery is driven by a farm tractor, and last week a stack of seed oats was satisfactorily threshed by the new mill.
Only four men were required for the work, and the dressing of the grain was perfect. Mrs Albert Hutton fed the first sheaf.”

In November 1935 the Dundee courier noted that a new mill had been installed in the Auchterran district . It recorded it as an “interesting event”:
“An interesting event had taken place in the Auchterran district at Powguild Farm (Mr John Cunningham).
In presence of a large number of friends and neighbouring farmers a new threshing mill was installed.
A pleasing touch in the ceremony was the part played by Mr David Fair, of Ballinkirk, who was tenant of Powguild 50 years ago. Mr Fair put through the first load.
The new plant, which is driven by electric power, was built by Messrs R. G. Garvie & Sons, Aberdeen, and has a high-speed drum screen and straw and grain convergers.
After the installation Mr and Mrs Cunningham entertained the company.”