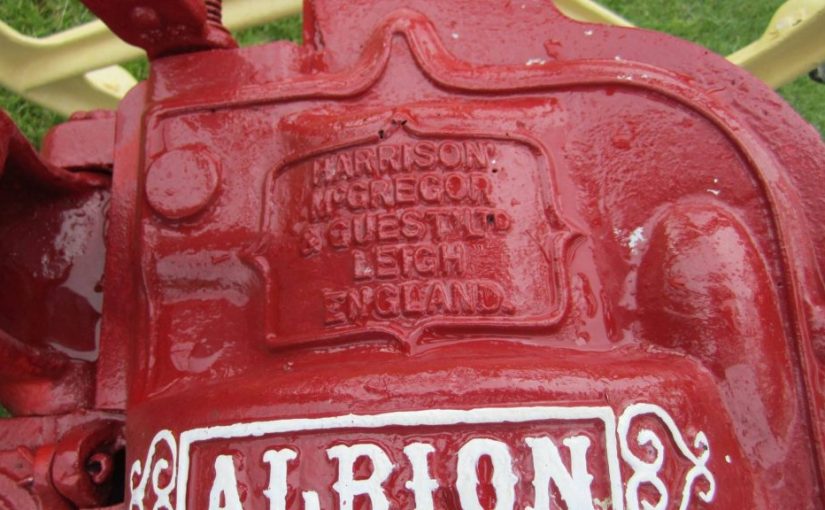 A number of Scottish agricultural implement and machine makers made their way to England to work in the industry. Some of them like David Greig, Harvieston, Kincardineshire, played important roles in major companies such as John Fowler & Co (Leeds) Ltd. Another major figure was Alexander McGregor of Keith, Banffshire.

The Banffshire journal and general advertiser of 14 September 1909 sets out Alexander MacGregor’s story through its obituary. It is quoted at length:

“Death of successful son of Keith The late Mr Alexander McGregor, agricultural engineerMany friends in the North, and a large number of the farming community throughout the country will hear with regret of the death of Mr Alex McGregor, of Messrs Harrison, McGregor & Co., Albion Iron Works, Leigh. Lancashire. Which took place on Tuesday morning. Mr McGregor was in his 74th year. He had been more or less an invalid since he had a paralytic seizure fifteen years ago last Christmas eve, but that did not prevent him paving regular visits to the Albion works until a more recent date, when his health became worse.Mr McGregor was born in Keith on December 3, 1836, and was seventh son of the late Mr Peter McGregor. Born in humble surroundings, he attended the Keith School, but it was not until he commenced work as a youth that he began to show traces of that inventive genius which was to serve him in such good stead later in life. When a comparatively young man, he invented the adjustable and expanding breast ridging plough, which was such a great advance upon the ordinary plough that, he had taken the precaution of patenting it, he would have made a fortune out of it. He was brought up in his father’s business, and became a partner in the firm of Messrs McGregor & Son, blacksmiths and general engineers, mid Street, Keith. The business was sold in 1866 to Messrs Auchinachie & Simpson, and, leaving Keith, Mr McGregor entered into partnership with Mr Humphries at Aberdeen, and they commenced business as plough makers, agricultural implement manufacturers, millwrights and engineers. A disolution of partnership took place, and both Mr McGregor and Mr Humphries migrated to England, where their talents were afforded fuller scope. For some little time Mr McGregor was with Messrs Ransome, the well-known agricultural machinists of Ipswich, but subsequently went to work for Messrs J. & F. Howard, agricultural implement makers of Bedford, where his late partner, Mr Humphries, occupied a position of the manager of a department. It was whilst Mr McGregor was with Messrs Howard that he attracted the notice of Mr Reuben Sims, the then managing director of Messrs Picksley, Sims, & Company, Butts Foundry. Mr Sims offered Mr McGregor good terms to go to Leigh and superintended the manufacture of rakes and other agricultural implements. Mr McGregor accepted the offer, and went to Leigh in the spring of 1867.

That was the stepping stone to a career that was destined to have a great effect upon Mr McGregor’s future, and upon the history of the Lancashire town of Leigh. For about six years he faithfully served Messrs Picksley, Sims & Co., as a foreman. At that time the firm had a small place in Albion Street, which was chiefly used as a warehouse. Mr McGregor, the late Mr Henry Harrison, father of the present Mayor of Leigh, and of Mr T. D. Harrison, the general manager of the Albion Ironworks, resolved to start in business on their own account, along with Mr George Rich. Negotiations were opened with Pickley, Sims & Co., and in February, 1873, that firm sold the three enterprising gentlemen the Albion Foundry. The firm of Messrs Harrison, McGregor & Co., gradually built up a splendid name. The improvements made in mowing and reaping machines and other agricultural implements were so excellent that from a small beginning with about fifty workpeople they increased in leaps and bounds until they became a firm of world-wide repute. Mr Alexander McGregor exercised his inventive genius to the full on behalf of his own firm, and among agriculturists his name became a household word, his fame and that of the firm extending throughout Europe and America. In America, France, and Germany the firm built up a great reputation, the present Mayor of Leigh contributing largely to its success, while his elder brother, Mr T. D. Harrison, also did splendid work on behalf of the firm. The Company were also singularly fortunate in securing as the works manager Mr McGregor’s younger brother Robert, a man of great skill and untiring perseverance. Leigh owes a great deal to the Albion Ironworks, for from employing about 50 men in 1873, it increased so largely that upwards of 1200 hands are employed, the firm being probably the largest manufacturers of agricultural machines in Great Britain. So successful was the Albion Ironworks that the older firm of Messrs Picksley, Sims & Co., could not compete with the new rival, and gradually sank out of existence, the works being closed some years ago and the bulk of the work-people securing employment at the Albion. When in December 1891 the firm of Messrs Harrison, McGregor & Company was converted into a Limited Liability Company, Mr Alexander McGregor was appointed managing director, and held that position until his death. Mr McGregor was twice married. His first wife was Miss Anna Foxcroft, of Leigh, who died about 35 years ago, leaving one son, Alexander, who is now in Canada. His second wife, who survives him, was Miss Emma Murray, of Manchester, and their children are Frank, Peter, William, Minnie, Bessie, Eleanor, and Constance.

As to his general characteristics Mr McGregor was not only an eminently practical man, but he was blessed with great foresight and tenacity of purpose. He had the faculty of commanding the admiration of his workpeople, and they worked untiringly, knowing that Mr McGregor would thoroughly appreciate what they did. In his younger days he was a most energetic walker, and his mind was centred in his business. He had few sporting instincts. His greatest happiness was in developing his works. Politics he did not care for, and he eschewed the, as far as possible. Several high honours would have been conferred upon him had he cared to accept them, but his inclination did not lie in that direction. For a great many years he was a member of the Independent Order of Oddfellows. Genial and generous to a degree, with a courtly and kindly disposition, he made many staunch friends, and he had no sturdier backers than his own workpeople, who recognised and fully appreciated his genius. He is dead, but his work will live after him, and the town of Leigh will never be able to pay the debt of gratitude it owes to him.

The funeral took place at the Leigh Cemetery on Thursday. The deceased’s late residence is not far from the cemetery, and consequently the demonstration of respect that would have been shown in the town had the cartage passed through the chief streets, were not possible. However, the flag at the Liberal Club was at half-mast. The floral tributes were very numerous, and at the funeral there was a large company of mourners.”