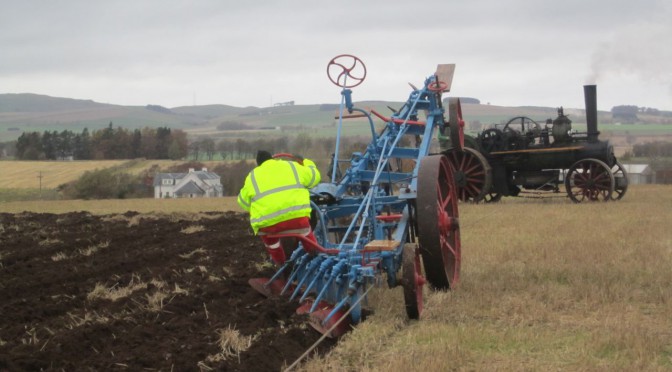 By comparison to England, steam ploughing in Scotland is an event.  Today, there are only two pairs of matching steam ploughing engines in the country. One of them is “Mistress” and “Master”, Fowler BB1s with serial numbers 15138 and 15139, registered in March 1918. 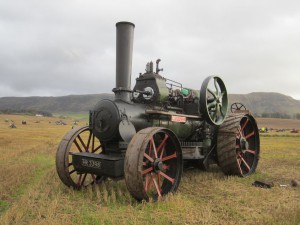 The working demonstration of these two steam ploughing engines with their 6 furrow anti-balance plough, all owned by the Cook family of Leven, at the Scottish National Championships on 25 and 26 October 2014 at Kinross, was a significant event.  Their appearance marked a new chapter in Scottish steam ploughing history.  It is one that has a number of firsts: that steam ploughing had been undertaken at the Championships in their 52 year history; that a matching pair of engines have been used to plough in the Fife and Kinross-shire area  since the late 1940s or early 1950s; that “Mistress” and “Master” were working together in a public display; that their plough, brought back with “Mistress” from Canada in 2012, had been used in 70 years. 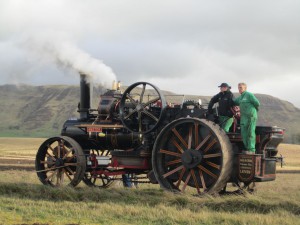 Watching the display brought to mind the accounts in the press of the steam ploughing demonstrations (private and public) in Scotland from the late 1850s to mid-1870s and the interest that these generated by farmers, landowners and members of the public seeing steam ploughing for the first time.  At each there was the close scrutiny of how the engines and their tackle worked, the quality of the work produced, and how it compared to that of other ploughing systems (whether horse or tractor).  In the modern-era it was thought-provoking comparing the 6-furrow anti-balance plough with 6-furrow tractor ploughs also being demonstrated elsewhere at the Championships.

For me, the sight of a set of steam ploughs manufactured by an English manufacturer (John Fowler & Co. (Leeds), Limited), and with Wiltshire registrations (HR3398 and HR3399), raised two questions: what interplay was there between the two counties in the development, adoption and use of steam ploughing and why did Scotland have a significantly different steam ploughing history to that of England. 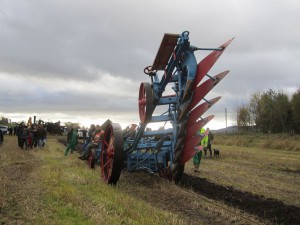 Historically, steam ploughing had always had a much more restricted role in Scotland than in England.  At its height in the late 1870s, there were an estimated 700 ploughing sets in England, though only around 50 sets in Scotland, with some counties having recently acquired their first one.  That difference was even greater by 1918 when John Fowler & Co. (Leeds) Ltd published a map of their ploughing engines throughout Britain.  While there were “nearly 600 sets” of steam tackle at work in “this country”, there were only 4 in Scotland, all in East Lothian, Berwickshire and Roxburgh; the most important crop growing areas to the north of the Forth-Clyde line were not even included on Fowler’s map.  One set was still at work in Fife in 1937.

But steam ploughing was not a subject that was at the margins of debate and discussion in Scotland.  After the late 1850s, when steam ploughing had become a reality, there was intense interest in its application to Scottish agriculture.  That interest was especially noted in the 1860s and 1870s the two most important decades for the growth of steam ploughing, before the onset of the agricultural depression.  The Scottish agricultural press carried extensive coverage.  So too did the regional press.  There were reports of trials, extensive debates of the merits (or otherwise) of steam recorded in the transcripts of discussions at leading farmers’ societies, news of technological developments, local news of purchasers and their experiences.  These included news and reports from England – including the all-important results of the trials of the Royal Agricultural Society of England.  There was therefore significant exchange of practical knowledge and experience between the two countries. 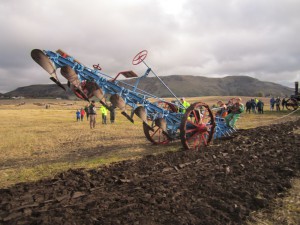 A number of Scotsmen played a role in the development and spread of steam ploughing, whether based in their own country or in England.  Indeed, it could be argued that Scotland had a disproportionate role in the development of steam ploughing tackle: David Greig, born at Harvieston, Stonehaven, Kincardineshire in 1827, was a partner of John Fowler & Co, Leeds (later John Fowler & Co. (Leeds) Ltd), whose steam ploughing engines and tackle were the most widely used throughout Britain.  David was actively involved in the designing of steam ploughing machinery, and had a number of patents attributed to him.  The Fisken brothers (David, William and Thomas), who invented another popular system of steam cultivation, the Fisken System, were also Scottish, being raised at Gelleyburn Farm, near Crieff, Perthshire; they moved to England in 1855. 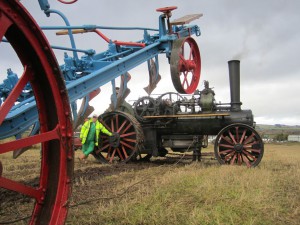 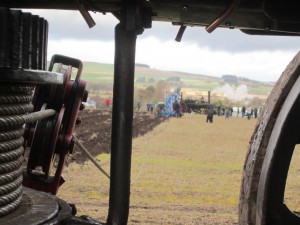 Some of the English steam engine manufacturers made steam ploughing tackle to suit Scottish conditions.  Fowler’s “baby engine”, an engine of 6 nominal horse power, advertised in Scotland for sale from 1875, was marketed as being “being specially designed for Scotland”.  It was highly regarded by the East Lothian Agricultural Society which had to re-conduct its trial owing to criticism of its overly-favourable review.

There were a number of specific factors in Scotland that meant that steam ploughing had its own distinct history.  Two of these appear to have been especially important.  The first is topography.  Steam ploughing could not be introduced into many parts of the country which had unsuitable soils, high stone content, small or irregularly shaped fields, as well as hilly fields.  Its use was thus largely confined to the eastern arable districts, and also those where there were supporters of steam; not all districts had these. 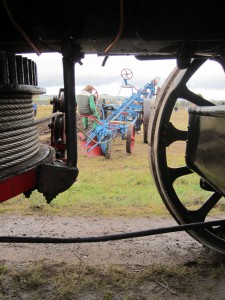 The second was the difference in how steam was adopted and developed.  In Scotland, as in England, enterprising landowners and tenant farmers played the most important roles in the initial phases in the adoption of steam ploughing.  In England their role was taken over by the steam ploughing companies which made steam available to farmers and others who could not purchased their own tackle or have access to it, for example from a neighbour or a landowner.  In England they were established in their hundreds.  However, while Scotland had the earliest steam ploughing company in Britain, established in 1860, only a handful of these companies were established;  the last one, the Philorth Steam Cultivating Company Limited, was wound up in 1888.  There was therefore not the critical mass of sets or users to maintain steam ploughing.  Thus, interest was lost when enterprising landowners and tenants died or lost their tenancies and were forced to sell their steam tackle.
In marking a new chapter in Scottish ploughing history, this time in the preservation era, the working demonstration of “Mistress” and “Master” asks questions about the different ploughing histories in Scotland and England and in particular about the relationship between English makers and Scottish users.  These relationships were crucial for the development, adoption and use of steam ploughing.