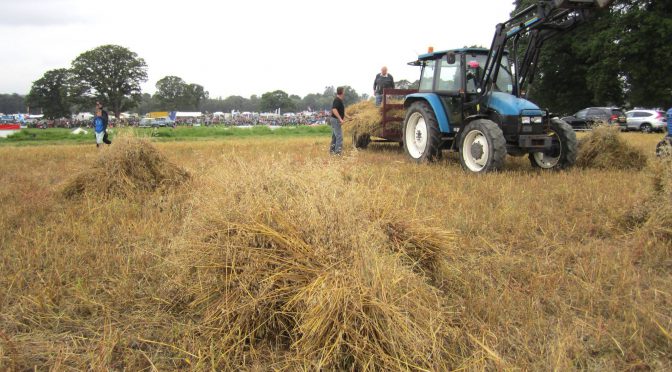 Leading the harvest, or bringing in the stooks to the stackyard to be
stacked, was one of the major tasks in the farming year.  It was a 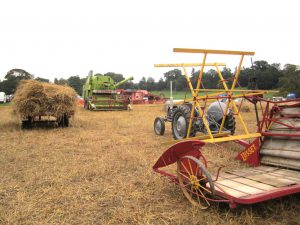 labour-intensive task, requiring all the farm-staff, sometimes working for long hours.  In wet or protracted seasons, leading could take place over a number of weeks.  In particularly poor seasons work continued until Christmas or New Year.

Leading took place at different rates, even within a district.  For example, in Aberdeenshire in September 1884, the Aberdeen journal noted that:

“The weather on Tuesday was cool and breezy, and a deal of grain was led in very good order.  On Wednesday, with the exception of a passing shower or two, which were heavy enough in some places to stop leading, it was also fine, and yesterday was an exceptionally busy day on the harvest field, the weather being everything that could be desired.  Even in sheltered nooks the stuff was sufficiently well dried to allow its being carted home, and near the city leading was proceeding vigorously, but where the ends of the sheaves are full of clover and grass the west side of the stocks are still too wet for leading.  The harvest is all but finished on the north-east seaboard of Aberdeenshire for some twelve miles inland. Leading would be nearly finished this week all over the county, with the exception of the glen districts, if the present weather continues.  On Deeside there is a remainder still to cut, and a good many fields are covered with stooks.  It will be a week hence, probably more, before the harvest is finished about Braemar.  The harvest is now fairly completed in the Turriff district.  Owing to the mild, foggy weather which prevailed during the early part of the month some difficulty was experienced in getting the grain to keep in the stackyard, but the sharp, drying breezes of the past week have helped greatly to cool the heated stacks and put the stocks still afield in splendid condition for leading.” 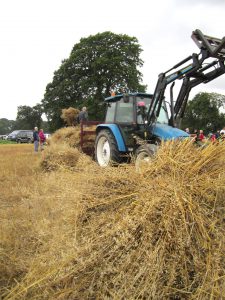 Leading involved a lot of forking.  It also involved a lot of careful planning to ensure that the teams with the carts or trailers were efficiently loaded and unloaded.  Ideally, there was one or more cart or trailer being loaded in the field at the same time when there was one or more being unloaded at the stackyard.  When teams were too fast or too slow and work was not steady tempers were tried.  There could be “aye another load coming” or workers were standing in the yard.

Carts were loaded with sheaves in a particular way. According to Henry Stephens, writing in The Book of the Farm, in 1889:

“A corn-cart is loaded with sheaves in this way:  The body is first filled with sheaves, their butt-ends to the shaft-horse, and to the back-end of the cart.  When these come to the level of the frame, other sheaves are placed across them in a row along both sides and both ends of the frame, with the butt-ends projecting as far beyond the outer rail as the band, the sheaf at each corner of the frame being held in its place by transfixion upon a spike of the elongated bolt which secures the corner of the outer-rail frame.  Another row of sheaves is placed upon these.  Sheaves are then placed along the middle of the cart with the butt-ends like those in the body upon the corn-ends of the side sheaves to fill up the hollow of the load.
Thus row after row of sheaves is placed, and the hollow in the middle filled well up at last, 12 full stooks making a good load upon an ordinary cart.
Before finishing, it should be seen that the load is neither too light nor too heavy upon the horse’s back.
A load thus built will have all the butt-ends of the sheaves on the outside, and the corn-ends in the inside.”

“Leading” is a word that brings back many memories of the grain harvest.  Ask anyone who worked with at the harvest in the days of the binders and they will tell you about the hard work, skill and frustrations of the work.  But they will also tell you about the pride in undertaking the work: you could tell the status of a farm by the state of the stackyard and the way the stacks had been built.

The photographs of loading the harvest cart were taken at Scotland’s Farming Yesteryear, September 2014.