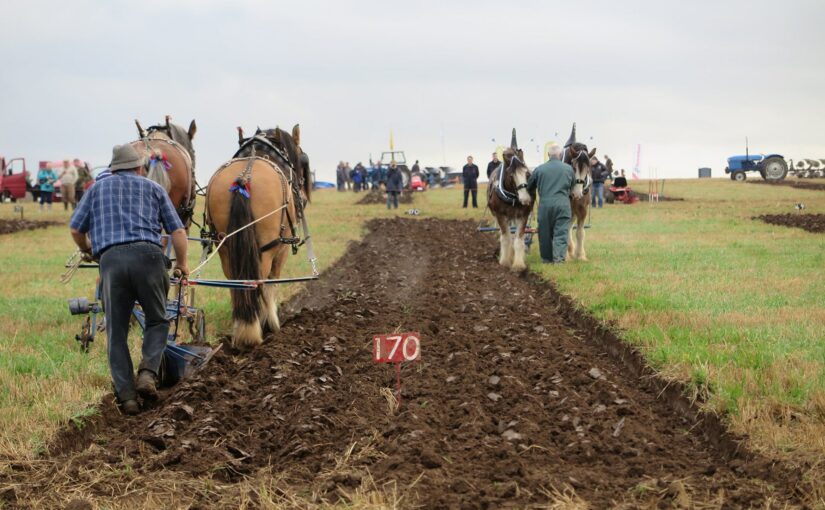 In each of the eighteenth, nineteenth and twentieth centuries we have seen a number of important innovations in the making of ploughs and in ploughing. These included James’ Small’s lightweight metal plough, based on the Rotherham plough, Thomas Pirie’s double furrow plough. There were also a variety of steam ploughing and cultivation systems. From America there were also chilled ploughs, including the Oliver.

One of the Scottish agricultural implement makers, William Wallace of John Wallace and Sons, Glasgow, set out a number of key developments in ploughs in a talk to the Glasgow and West of Scotland Agricultural Discussion Society in early 1892 which was reported in the Linlithgowshire Gazette of 6 February. The company was a key player in importing the new Oliver ploughs, chilled ploughs, into Scotland – an important innovation in ploughing at that time.

The article is worth quoting at length for the developments it records:

“Lecturing on this subject before the Glasgow and West of Scotland Agricultural Discussion Society, Mr Wm Wallace, agricultural implement maker, Graeme Square, Glasgow, said-If there was any implement more than another we have come to look upon as being established as a standard implement, and one that was likely to escape the notice of the restless spirit of the inventor, that implement was our common iron plough, an implement that for nearly half a century had turned the furrows on the surface of mother earth, with such good results and satisfaction to all concerned, that it was not too much to expect that, out of respect for the services it has rendered, it would have been allowed to retain its position unmolested; but it appears our Yankee friends have no respect for ancient history. Whether that is on account of their great anxiety to create a new history completely American or not, I cannot tell; but certainly they have made such radical alterations on the appearance and principle of the plough that, when our common plough and American chilled plough are laid alongside each other, a person not initiated in agricultural matters could hardly suspect that they were to be applied to similar purposes. In the construction of our iron plough, the inventor appears to have centred all his ingenuity in designing a plough with a thorough substantial frame or body, and had little regard to the weight, the ease or simplicity, in which the wearing or duplicate parts could be replaced; and I would just here venture to remark that the frame of our Scotch iron plough, with forged coulter hole, solid sheathe, and double draught lugs, is just about as substantial and excellent a piece of smith work as it is possible to produce; and I question if any other country in the world could turn out such splendid workmanship at the extremely low price it is supplied to our farmers. In fact, I have heard American plough makers declare that they could not produce a similar plough for less than three times the price the plough is sold at in this country.

In designing his chilled plough, the American inventor seems to have gone on entirely opposite lines from the British maker, as the former appears to have expended very little thought on the body or frame of his plough, the beam being simply a straight piece of oak, and the handles oak or ash braced together in the most simple and inexpensive manner. When we come to examine the parts of the plough where wearing parts are attached, it is here we find that the American has applied all his skill, as every part of the plough that is subject to be speedily worn out is fixed in such an easy and simple manner, that they can at once be replaced by an ordinary farm labourer. No doubt the exigency of the American farmer demanded a plough constructed on these lines, as it was all-important to him that he should have a plough that could at once be repaired on the farm, he being so far removed from a manufacturing centre, while the easy access of our farmers to the village blacksmith made the easy repairing of ploughs of little or no consequence, as all the Scotch plough repairs are done by local blacksmiths. It is, however, when we cone to enquire into the merits of the common iron plough v the American chilled plough as labour saving implements, that the latter stands out prominently as the plough best suited for the times we live in; hence the reason it is fast superseding our heavy iron ploughs throughout the world.

The principal points of superiority claimed in the American plough are, first, lightness of plough itself, its weight about 1 1/2cwt, weight of common iron plough fully 2 cwt; second, lightness of draught; third, capability of doing about a half more work; fourth, ease of management. The draught of an American plough, turning furrow on lea land 13 inches broad by 6 inches deep, is 2cwt. Draught of an American plough, turning furrow 10 ½ inches by 7 inches, is 3 ¾ cwt. This draught test was made by Professor Jamieson during the winter of 1884-85 at the experimental farm of Glasterbury, in Aberdeenshire. For the following draught test I am indebted to my friend Mr John Speir, of Newton- American plough in sticky land furrow 13 inches by 8 ½ inches, 25 to 28lbs; iron plough in sticky land, furrow 10 inches by 8 ½ inches, 37 to 42 lbs. In potatoes or sandy soil, American plough, 23 lbs per inch; iron plough, 46lbs per inch; clay stubble land, furrow 9 inches deep, American plough 38 to 42 lbs; iron plough, 46 to 56 lbs; light land, ploughing 3 inches deep, 12 lbs per inch; iron plough, 17lbs. From these tests it is quite safe to assume that the chill plough is at least one-third lighter in draught than the iron plough, ie., chill plough will turn a furrow 14 inches broad by 8 inches or 9 inches deep with two horses, which would necessitate three horses in the common iron plough. Various reasons could be adduced for the light draught of the chilled plough, among these being lightness of plough, and plough so constructed that it cuts the furrow in such a way that it comes loosely on to the mould-board, which is of a concave instead of a convex shape, and furrow is quite naturally thrown over without any pressure or hugging of mould-board, as is done by furrow against mould-board on iron plough. This want of pressure also obviates the lateral thrust on landside, quite a source of increased draught in the iron plough.

The bright polish of chilled mould board is also a most important factor in producing light draught; and it is here that the Oliver chilled plough retains its supremacy over the many imitations that are now made; for, no doubt, a plough with a concave mould-board, unless well chilled and retaining its glassy surface, would add to, instead of decreasing, the draught. The use of a wheel or wheels also tends to lighten and steady the draught, while the ridge-and-furrow system of ploughing, at one tine so common over all Scotland, did not permit of its adoption with such advantages as on level land; but now that eep furrows are all but abolished, the wheels might with very great advantage to both men and horses, be used on our Scotch ploughs. The ease with which a chilled plough can be controlled by an unskilled ploughman is also a point of great importance, when skilled labour is now so valuable. While I think you will agree with me that it is impossible for any plough to be made so as to be universally adopted as the plough suited for all kinds and conditions of soil, still the American plough has been shown to possess advantages which justly allow of its being classed as one of the many laboursaving implements that can, with considerable advantage, be used by the British farmer; and its light draft, and thorough pulverising and breaking up of the furrow, and turning over and completely burying all weeds and surface grass, makes it specially suited for spring and fallow ploughing; and if this plough was not used for any other kind of work, it would well repay the outlay incurred in its purchase, as the spring time, above all other seasons in the year, us a time when farmers’ horses are hard wrought, and farm labourers are fully employed. Surely it is a great boon when a plough can be had that is one-third easier to draw, will do a third more work than common iron plough, and at same time be wrought by any unskilled lad that can handle horses. The result of the introduction of the American chilled plough into this country has been the almost total extinction of the double furrow plough, which was invented by Mr Pirie, Aberdeenshire, about 20 years ago. A large number of these ploughs were made and sold by different makers, and, when first put before the agricultural public, many thought it was a plough likely to come into general use but after a few years’ experience, it was found that, unless for very light land, the draught was too heavy, plough difficult to work and expensive to keep in repair; and the fact that it required a three-horse yoke all militated against it; and at the present time the sale of this plough us very limited.

Before passing from the subject of the plough, I wish to refer shortly to a special pattern of Scotch plough that has been very prominently before the farmer in the west of Scotland at our ploughing matches during the past dozen years or so. I allude to what is known as the “high-cut” plough, but what I, for want of a better or worse name, would call the “labour-giving” plough; as I unhesitatingly firm that this plough has not one redeeming feature to recommend it, unless it be the fact that its work, although it takes from eighteen to twenty-two hours to plough an imperial acre, is invariably awarded the first prize by the judges, and these gentlemen usually are practical agriculturists. The principles of this plough are directly antagonistic to those of the chilled plough, as it is difficult to make, difficult to keep and put in repair, does little work, cutting a furrow 6 inches broad by 8 or 9 inches deep, hard to hold, and can only be handled by a skilled ploughman. Some may feel inclined to blame the plough maker for introducing this plough; but no doubt the inventor, seeing the class of ploughing that judges at matches were gradually drifting into, was simply catering to supply the demand. The blame rests entirely on agricultural societies for consenting to allow prizes to be given to work that took man, horses, and plough twenty hours to plough an acre. In fact, I think the farmer who uses such a plough us hardly entitled to cry out about hard times. Had the rule laid down by the Highland Society, that ten hours be allowed to plough an imperial acre, been strictly adhered to, it would at once have prevented any retrogade movement in the direction indicated.”

The photos of horse ploughing were taken at the Scottish Ploughing Championships 2016, the steam ploughing engines at Fife Vintage Agricultural Machinery Rally, and the tractor ploughing at the Easter Ross ploughing match.