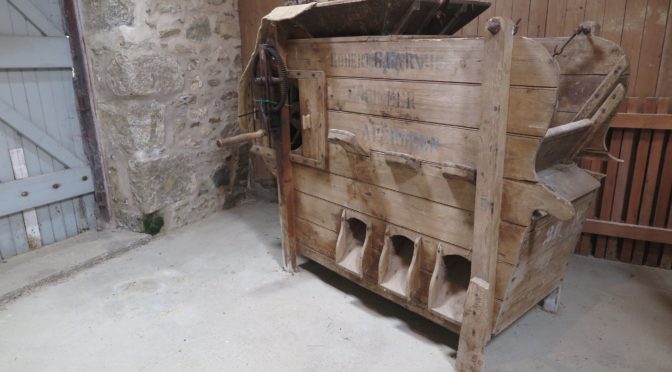 “Till of late years the operation of separating the grains from the straw was performed by the flail, to the manifest injury of both the farmer and the community, for though in some cases the work was tolerably well performed, yet in a great majority of instances it was otherwise. A quantity, perhaps equal to the seed over the county, was lost in the best cases, but where the allowance to the thrasher was either a proportion of the produce, known by the name of lot, generally a 25th part, or when he was paid in money, at so much per boll, the temptation to do the work in a slovenly manner was so great, that a quantity, perhaps double what was required for seed, was lost upon many farms; an evil that did not escape the notice of intelligent men, by several of whom attempts were made to construct machines, that would do the work more perfectly. The first of these was invented by a Mr Menzies, brother to the then Sheriff depute of this county; the machinery was driven by a water-wheel, which put in motion a number of flails of the same kind with those used in thrashing by the hand. Trials made with these machines were so far satisfactory, that a great deal of work was done in a given time, but, owing to the velocity required to do the work perfectly, they soon broken and the invention fell into disgrace.
Some time in the year 1758, another attempt was made by a farmer in the parish of Dunblane, in Perthshire. His machine was constructed upon principles similar to the Flax-mill, having an upright shaft with four arms enclosed in a cylinder, 3 ½ feet in height and 8 in diameter, within which the shaft and its arms were turned with considerable velocity by a water-wheel.-The sheaves, being presented by the hand, were let out from the top of the arms, by which the grain was beat out, and together with the straw descended through an opening in the floor, where they were separated by riddles and fanners also turned by the water-wheel.

About twenty years ago, a third attempt was made by a Mr Elderton, near Alnwick, and a Mr Smart, at Wark, both nearly about the same time. Their machine was so constructed as to act, by rubbing in place of bating out the grain. The sheaves were carried between an indented drum about 6 feet in diameter, and a number of rollers of the same description ranged round the drum, towards which they are pressed by springs, in such a way as to rub out the grain, when the drum was turned round. Upon trial this machine was also found defective, as along with its doing very little work in a given time, it bruised the grain, and so materially hurt its appearance, as to lessen its value considerably in the market.

The machine, in its imperfect state, was seen by the late Sir Francis Kinloch, Bart, of Gilmerton, a gentleman well acquainted with mechanics, and who had paid much attention to country affairs; it occurred to him that the machine might be rendered more perfect, by enclosing the drum in a fluted cover, and fixing on the outside of it four fluted pieces of wood, capable of being raised a little from the circumference by springs, in such a way as to press against the fluted cover, and to rub out the grain as the sheaves passed between them; but after repeated trials, it was found to bruise the grain nearly as much as the model, from which it was copied. In that state it remained for some time, and was afterwards sent by Sir Francis to a very worthy and ingenious character, Mr Mickle of Know Mill, in his neighbourhood, (a millwright by profession), who had for a considerable time employed his thoughts upon the same subject. After much consideration and several trials, it appeared to Mr Mickle that the purpose of separating the grain from the straw might be accomplished upon a principle different from any that had hitherto been attempted, namely, by skutches acting upon the sheaves by their velocity, and beating out the grain, in place of pressing, or rubbing it out; accordingly a model was constructed at Know Mill, in which the grain was beat out of the drum, to which it was presented through two plain feeding rollers, which were afterwards altered for fluted ones. The first machine, on a large scale, executed upon this principle, was done by a son of Mr Mickle’s, for a Mr Stein of Kilbagie, in the year 1786, which, when finished, performed the work to the satisfaction of all parties. A patent was afterwards applied for, and obtained in 1788.

These machines are now used upon most of the principal farms in the county, and are wrought in different ways, by steam, by wind, by water, and by the strength of horses.
Expense- a horse machine of the first powers, with its appendages of rakes, fanners, &c a few years ago could be erected for the sum of 100l or 120l sterling; but owing to the present high price of materials, and workmanship, the expense will be considerably more. A wind machine costs about 250l independent of the buildings: thee, however, cannot, with propriety, be included in the expense, as, upon almost every farm, barns to a considerable extent are required, even when the grain is thrashed by hand. The only defect of machines worked by wind, upon their first introduction, consisted in the risk to which they were exposed, by stopping them to take in the sails, which could scarcely be done during a brisk gale: in that way it sometimes happened that when the wind freshened considerably after the machine was set agoing, either the sails were torn to pieces, or the arms broken off. That defect, however, is now remedied by a late invention of Mr Mickle, by which the whole sails can be taken in, or let out, in less than half a minute, merely by a person pulling a role within the house; by this contrivance the sails are, with ease and expedition, proportioned to any degree of wind, a uniform motion is produced, and all danger of straining or hurting the machine is avoided.

The number of hands required for working one of these machines is from five to six. The grain is commonly carried into the barn in a cart, from which it is handed up to a person who again hands it to the man who feeds the machine.
There is only one thrashing machine worked by steam, in East Lothian: it is situated in the immediate vicinity of a colliery, and, from the cheapness of fuel, is worked at a very trifling expense.
The first thrashing machine, as already stated, was erected in 1786, since which they have increased so much as to be now common upon almost every farm, of any tolerable extent, throughout the county, even upon some very small. They have been introduced upon a reduced scale, at a price so low as 40l; these small machines, having little work to do, and that little being, in general, done slowly, answer the purpose tolerably well; but, though cheaper in the first instance, they are, in the end, more expensive than larger ones, a certain degree of strength being absolutely requisite to doing the work perfectly. If the parts of the machine are below that degree of strength, the work is either ill done, or the machine is destroyed by being exerted above what it is able to bear.”

Accounts like these are important for detailing the history of innovations in particular geographical areas of Scotland. East Lothian was an important county for the development of a number of implements and machines, most notably those of the barn in the eighteenth and early nineteenth centuries.