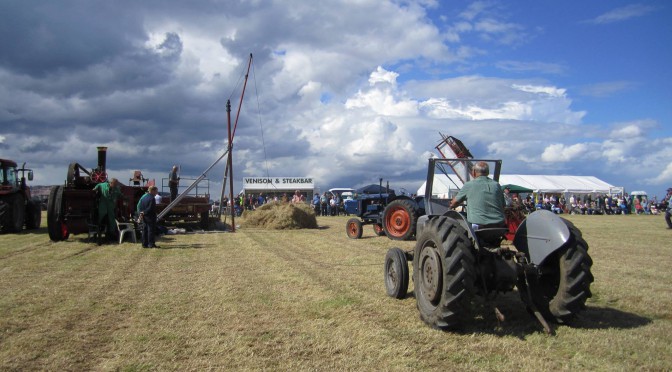 The horse fork was an indispensable part of the stackyard at hay-making time. 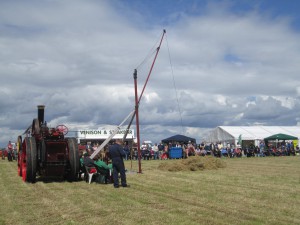 It was a means to lift hay in hay from a ruck or rick onto a stack that was being built.  It was, according to Stephens’ Book of the Farm in 1908, “a simple and convenient arrangement for hoisting the hay”.  It was a pole “about 35 feet high, which is held in upright position by three or four guy-ropes rom the top of the pole to iron pins driven into the ground.  A short “jib” or “gaff”, 10 feet long or so, is arranged to slide up and down the pole, being worked by pulleys from the ground.  The fork is attached to an 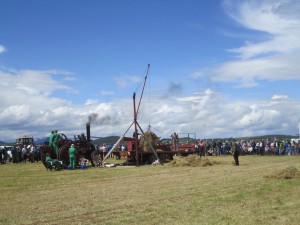 inch hemp rope or 1/2 inch steel strand rope, which passes over a pulley at the point of the jib or gaff, thence down the upper surface of the gaff to its lower end, where it passes over another pulley, from which it runs down the side of the pole to about 3 feet from the ground, where it passes through the pole and under a pulley fixed in it, where it is attached to the tree or chains by which a horse draws up the forkful. 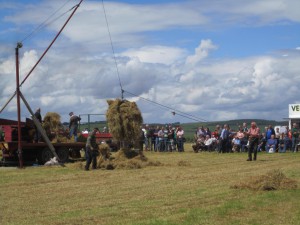 The pole is set with a slight lean to the stack which is being built, so that as soon as the ascending load has been raised above the portion already built, the gaff or jib with its load always swings round over the top of the stack, where it can be dropped on almost any part of even a large stack.”

The horse fork had a number of advantages.  Stacks built with one were more easily kept perpendicular than those built from hand-forking.  They allowed hay to be more evenly distributed onto the top of the stack as it was being built.  They allowed a larger number of forkers to work at one time, and for them to more efficiently build a stack.  And, of course, it was a great labour-saving device! 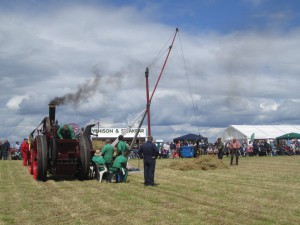 There were a number of makers of horse forks in Scotland.  In 1904 Alex Sloan, Greenhill, Crosshouse, developed one that was manufactured by Wm. Wilson & Son, Plaan Saw Mill, Crosshouse.   According to the Scottish Farmer, in that year “it has now been tried by some of the leading agriculturists, who bear testimony to its superiority.”

The horse fork was a useful implement to have on the farm, greatly easing the work of building stacks at hay time.  It was also an implement that was made by a wide number of makers throughout Scotland.

The photographs from the Fife Vintage Agricultural Machinery Club rally, June 2014, show a horse fork in use.