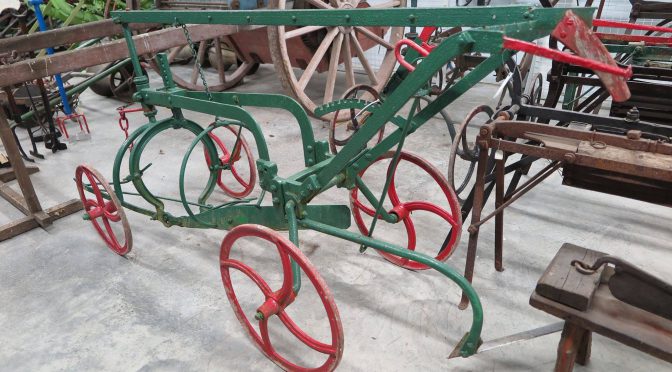 We all remember the hard work of shawing the turnips or neeps by hand.  It was a cold wet and tiring job. Numb hands and a sharp knife could also make it a dangerous job. And the job could go on for day after day.

In the 1890s the Scottish agricultural implement and machine makers, especially those in the areas where large acreages of neeps were grown, looked at how they could try to remove the drudgery from this work. Some were well-known makers of implements; others were local blacksmiths.  They had the challenge of making an implement that could loosen the neeps from the drills in which they grew, tail them, and also top them.  And neeps didn’t grow evenly in the drill.  Nor did they grow to the same size.

The trial was undertaken under unfavourable conditions, the weather being poor.  The attendance of farmers and other interested parties was thin.  But it was a good trial.  All the machines “worked satisfactorily”, with the topping ‘in nearly every case was well done …. the tailing was also fairly well done, but none of the machines made as clean work as hand-tailing”.  The turnips were “left standing in rows as they were grown”. 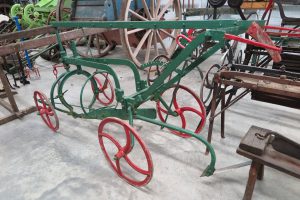 The first prize of £10 went to the turnip lifter made by Macdonald Brothers of Portsoy.  It could also be used for scarifying turnips.  The second prize of £5 was awarded to a machine from John MacDonald.  It was called the “Ferret turnip lifter”: it was drawn by one horse, and moved on slides without wheels.

The “Ferret” in particular became well known.  The well-known and renowned Glasgow implement makers and agents P. & R. Fleming of Graham Square (also known as “P. R”), acted as agents for the “Ferret” in the south of Scotland into the turn of the twentieth century, also extensively advertising it in the Scottish agricultural press.  For a local smith like MacDonald this was a great achievement and a great boon to his business.

Source: “Trial of turnip lifters, Transactions of the Highland and Agricultural Society of Scotland, 1895, pp. 372-4.

The photographs of the Ferret turnip harvester were taken at the Highland Folk Museum, Newtonmore.