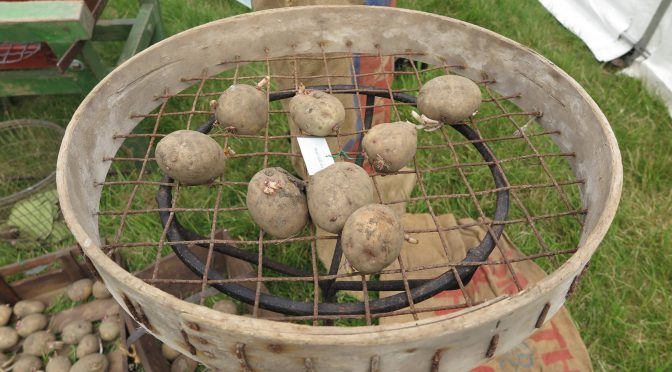 The machines for dressing tatties have come along way since the mid nineteenth century.

Tattie riddles and sorters were developed to be used in various circumstances. They needed to be used for dressing the first earlies in the field, and so had to be portable and easily moved. They were also required to be used alongside the tattie pits to dress the main crops over the winter months. As a greater tonnage had to be dressed with them they were larger, but had still to be capable of moved along the pit. When boxing became fashionable, static graders could be employed, with the tatties being brought to the dresser rather than vice versa in earlier days. They had to be able to sort the potatoes into various sizes and sort the sound potatoes from the unsound ones. 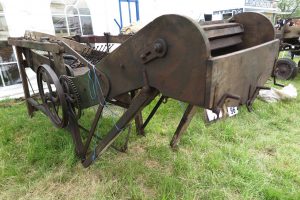 Potato dressing machines had been simple affairs. In 1875 P & R Fleming, Glasgow, sold a potato-riddler, invented by Sawney, for £3 10s.

By 1900 a range of riddles and machines were available. Matthew Dunlop, Glasgow, sold Dunlop’s galvanised potato screen at the cost of £1 5s. P. & R. Fleming & Co., Glasgow, had a galvanised potato riddler at a cost of £1 7s 6d. There were also potato sorting machines. John Scoular & Co., Stirling, had a new patent potato dressing riddle for £6 10s while A. & J. Main & Co Limited, Edinburgh, had a patent potato sorter for £7 10s. Penney & Co Limited, engineers, Lincoln, had a potato separator and riddle which divides the potatoes into three sizes at one operation for £9.

A number of companies that manufactured potato diggers also started to make potato sorters. Noted makers included Pollock of Mauchline, Ayrshire, (making a range of potato equipment in the 1870s), David Wilson, East Linton, East Lothian, and John Munro, Kirkcaldy, Fife. In 1914, David Wilson made and sold potato cleaning and sizing machines as well as potato washing machines and potato sporting boxes, a recent development. Wilson had won an equal premium (with 3 other machines) at the all-important Highland and Agricultural Society of Scotland trials of potato digger or lifters in 1911. 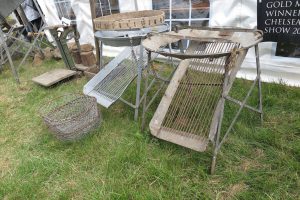 In 1939 potato sorters were made and sold by a number of manufacturers in Scotland. J. L. & J. Ballach, Edinburgh, made the Ballach’s potato sorter, new improved, with angle-iron frame and steel spared elevator. Thomas Sherriff & Co., West Barns, East Lothian, had a power driven potato dressing machine. Especially popular were the sorters of John Monro, Kirkcaldy, and Cooch & Son, Commercial Street, Northampton. Cooch’s machines were sold in Scotland from at least 1914, by dealers such as Kemp & Nicholson, Stirling. In 1939 Cooch exhibited six potato sorters at the Highland Show in Edinburgh, ranging from £7 10s to £60 for the potato sorter no 6A, with patent roller conveyor, feeding elevator, and petrol engine.

Cooch’s machines remained popular in Scotland as did those of Munro. By 1948 Kenneth Mckenzie & Sons, Evanton, Ross-shire, was to become associated with one of John Munro’s potato sorters, the “Eclipse potato sorter no 3”, which was the “outcome of forty-years’ experience in the manufacture of potato sorters.” It is worth describing the machine, as it was entered for a New Implement award at the Highland Show in that year:
“This machine … delivers both seed and ware onto the conveyor, which is wider than on the earlier models, and which has a division up the centre thereby delivering seed size at one side and ware size at the other, where both can be hand-picked before being discharged into bags, four of which can be fitted at the delivery end.
The machine uses the flat riddle principle with a circular movement, resembling hand-riddling. The potatoes do not suffer damage, and are better dressed and cleared than by other methods.
Although designed for power drive to handle large quantities of potatoes, the machine can be operated by hand in an emergency.
The machine and 1hp air cooled power unit with clutch are mounted on four large-sized wheels for travelling. These are fitted with very strong endless conveyor chains with octagon revolving slats so constructed that they revolve, thereby continuously turning the potatoes over and over, enabling defective tubers to be removed.” 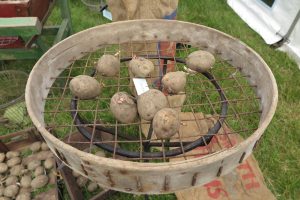 The experience of working at the tattie dressing changed greatly over the years. Hand riddles represented an important step forward in dressing, as were the early sorters. Electricity and other forms of power made a huge impact in the work. Today’s dresser she’d is a far cry from dressing by the pit in the 1870s!

Source: The tattie dressers and sorters were photographed at the Fife Vintage Agricultural Machinery Rally, June 2016.