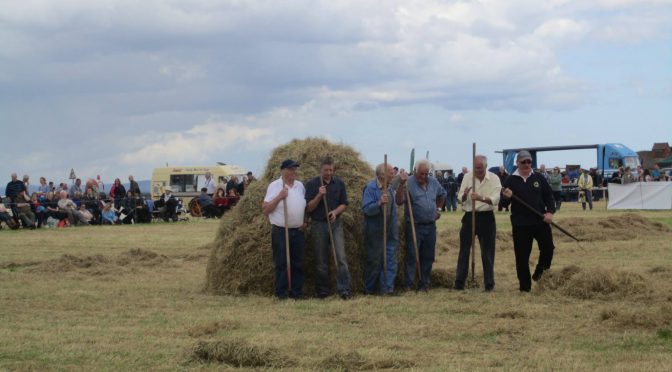 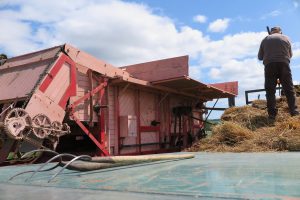 Forks were an important hand tool to have around the farm.  There were various types of forks, each used to undertake specific tasks including hay-making, grain harvesting, threshing and feeding cattle.  These former activities included a lot of forking!

Henry Stephens describes in detail harvest forks and their uses in The Book of the Farm in 1889.  He states:

“Forks used in the loading of corn require to have long shafts, not less than 6 feet, and small prongs.  Such a length of shaft is required 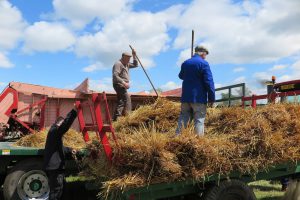 to lift the sheaf from the ground to the top of a loaded cart, or from the cart to the top of a stack.  The fork used in the field should have a strong stiff shaft, as the load on the cart is at no great elevation.  That for unloading the cart to the stack should be slender and elastic, as many of the sheaves have to be thrown a considerable height above the head.
The prongs, being small (about half the length of the prongs of the hay-fork), just retain hold of the sheaf, without being so deeply pierced into the band as to be withdrawn from it with difficulty.  A deep and firm hold with long prongs renders the pitching of a sheaf a difficult matter; and if one of the prongs happen to be bent, or a little turned up at the point, the difficulty is much increased. 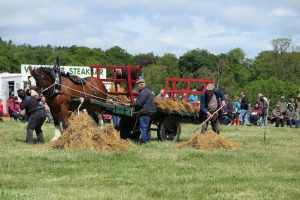 The prongs of the forks are now made of steel, and are therefore much lighter, more durable, and far superior in every way to the old-fashioned iron fork.
The best fork for the person on the top of the stack to use, in assisting the builder, is the short stable-fork.”

Forks could be purchased from agricultural ironmongers or general implement and machine makers.  Makers included Spear and Jackson, Sheffield, probably the most well-known maker.

The photographs show forks being used in haymaking and threshing at the Fife Vintage Rally in June 2014 and 2015.