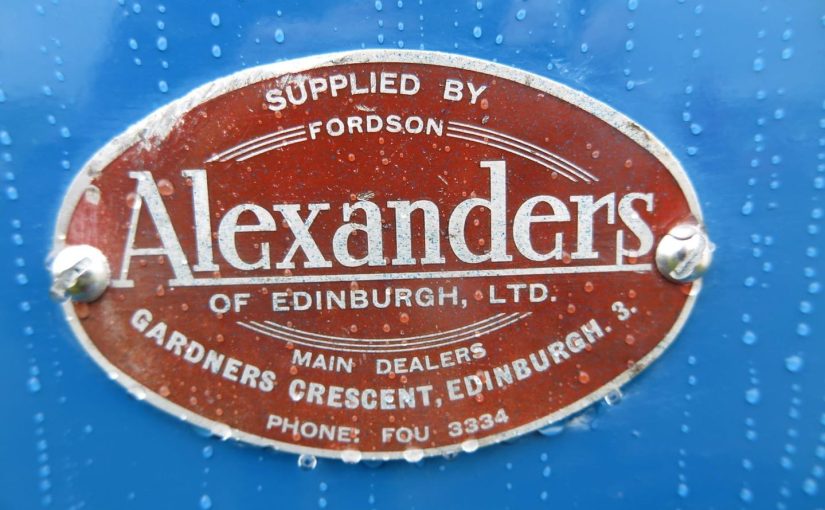 In 1922 Fordson tractors were being advertised in the agricultural and the general newspaper press in Scotland. Adverts were persuasive, not only recording how affordable the tractors were (especially after their price was reduced), but how practicable and economical they were.

Throughout the year there were a series of articles published which continued the narrative of why farmers should purchase a Fordon. We have looked through the newspapers and pulled out the text of these adverts to show how Fordson developed its advertising campaign over the course of the year. Sometimes more than one advert was published in a month. The text of these adverts has been quoted at length.

Wonderful reduction in price of the Fordson tractor, from £190 to the reduced price of £120. This extraordinary reduction makes the Fordson tractor a positive miracle in value, and absolutely places it beyond all competition whatever. Not only is the price a matter of wonderment to the mechanical world, but the Fordson tractor has no superior, and no equal in lasting quality. For economy in general upkeep, it decidedly has no equal, repairs and overhauls will be less.

At £120 the Fordson range is within the reach of every farmer Horses, housing them, attention, and the cost of feeding can be dispensed with, and business made to bring a better return.In these days when increased production is required, particularly with the farmer, it does not require a keen foresight to at once see the advantage of putting into use a Fordson tractor without further delay. We shall be pleased to produce testimonials from farmers who are presently using Fordson tractors which we have supplied.

We shall with pleasure demonstrate the use of the Fordson in ploughing or in driving fixed machinery upon the farm, and also for road traction purposes on a few hours’ intimation we can have the Fordson tractor, with plough, upon any farm within thirty miles of Edinburhgh, or further afield. For the convenience of all who may not wish to make a cash purchase, we arrange payments extending over twelve months, within which time the tractor will repay its cost entirely upon any ordinary farm.

£120 (at works, Cork): Steady, light, alert, power to spare, economical of operation. Watch a Fordson Tractor in action and you will wonder how these apparently contradictory qualities of strength, lightness, power and speed could ever be combined in one unit.

The Fordson speed is available for hauling. Its power is available for drawing ploughs or disc harrows through the heaviest soil or for running the cutting-box, grinder or threshing machine.We take pride in handling such compact, portable power plant.

AprilTractors again reduced. The new low price of the Fordson tractor makes it a thoroughly practical business proposition to all Perthshire farmers. The cost of working a Fordson is compared to the high cost of manual labour-today.

The utility of the Fordson has to be believed. Whether for hauling implements or driving stationary machines, the Fordson cannot be surpassed.

The Fordson cuts the cost of preparing land almost to half of what it costs with horses. But even more important is the fact that the Fordson saves from thirty to fifty per cent of the farmer’s time. And time saved getting fields in shape to plant in the proper season; getting things done when they should be done means money to the farmer.

As ever, the machine-way is proving more efficient, faster, easier than the old hand way. In the factory, the machine increases production, saves labour, produces more at less cost. And that is what the Fordson does on the farm. The Fordson way is the machine-way of farming. And it is the least expensive way of machine farming.

One man with a Fordson tractor can do more work easier with less expense than two men can do with horses. The Fordson will take care of every power job on the farm. Threshing, bruising, grinding, etc, all come within the power of the Fordson tractor.

Fordson The Universal Tractor £120 at works, Cork. Buy your Fordson now. At this amazingly low price you can’t afford to wait another day for your Fordson tractor.

Remember, the very day your Fordson arrives, it is ready for any one of the 101 jobs it can do-either as a tractor of a stationary power plant.

The Fordson have proved to the 200,000 owners that it has not only cut the cost of field work 30% to 50% but that it has made substantial savings on every job to which it is put.

“Fordson the universal tractor” This value has never been duplicated. It takes something besides engineering to furnish a tractor like the Fordson to sell at this astonishingly low price [£120] That something is owner confidence. Built on permanent satisfaction. There are 200,000 Fordson tractors in use-whererever Power Farming is being done Fordson is showing superior service. If you are not using a Fordson now, start right. The working ability of this remarkable power plant is cutting farming costs in half in almost every kind of work done, at the draw bar or from the belt.

The Fordson tractor is now £120. It is £120 well spent and an outlay which will repay itself in one season’s work. The Fordson will plough your land efficiently at the lowest possible cost, and compares favourably with tractors costing almost three times the price.

During the year Fordson tractor demonstrations were held by agents such as D. R. Gordon, Bathgate. In February 1922 he advertised a demonstration on the farms of Whitedalehead, Whitburn, Inch, Bathgate and Knightsbridge. Both these demonstrations were on lea. A report of these was printed in the West Lothian courier of 3 March 1922:

For the purpose of demonstrating the utility of the Fordson tractor to the farmers and others in the Mid Calder district, Mr D. R. Gordon, authorised Ford dealer, Bathgate, arranged a ploughing on the farm of Raw, kindly granted by Mr Howatt. A goodly number attended and were very keenly interested in the work. The plough used was an Oliver no. 7 adjustable double furrow, specially designed by the makers for use with the Fordson tractor. The onlookers were specially appreciative of the finish, cleanness and regularity of the ploughing. The driver easily works his plough adjusting, lifting and lowering it without dismounting, altering the depth and width rapidly. Opportunity was given young farmers to try their hand in ploughing and quite a number did so, winning the approbation of the onlookers and showing that the Fordson was easily manipulated by young and old.

The price has been reduced to £120, plus carriage and extras where required, and is a most valuable asset to cultivation in producing the most efficient beneficial results.

On the following day a further demonstration was given on a stubble land courteously granted by Mr W. Crawford, Barracks, Livingston. The day was fine and many interested farmers attended. All were greatly pleased with the rapidity and good work of the Fordson tractor and Plough, and while many contrasts were made of prize ploughing and that under the Tractor, the general consensus of opinion was that it was a great and efficient asset to the work of the farm, which would soon be adopted in agriculture progress, and with ploughmen anxious to excel in their work could very soon reach, if not excel, the merits of existing systems.

The Fordson Tractor is available for haulage up to six tons, and is much used for transport work, for harrowing and rolling, grass cutting, corn cutting, haulage of corn in harvest and all stationary work its uses are manifold. Steadily its great usefulness if being enjoyed everywhere and it will be thankfully enjoyed and appreciated by every class as a most valuable help and profit by a wide variety of users.

Last week a further demonstration was held on Whitedalehead Farm, Whitburn, on lea by a Ransomes plough. The tractor was by everyone pronounced a success, while the ploughing produced work which for cropping purposes was considered very satisfactory. Many interested visitors were present and many of the comments were alike amusing and interesting, but the general consensus was that the Fordson Tractor and Tractor Ploughs would from now onwards be seen on every farm as capital auxiliaries in farm work.

On the day following another demonstration was given on Inch Farm, kindly granted by Mr Adamson. Very good work was presented, showing the skill and efficiency of the Fordson expert, to whom the best thanks of the promoters are justly due. Mr Steel, who arranged the demonstration, is, with his staff, entitled to praise for the excellent arrangements.”