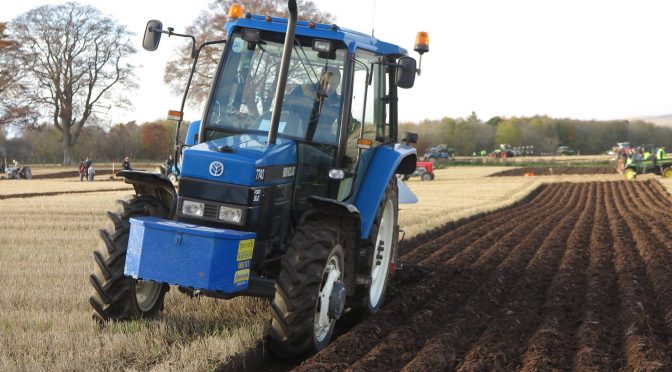 These reports were written according to a systematic manner, allowing the Board and its readers to compare and contrast the agriculture, agricultural practices and tools and implements in each county. Within these chapters the Board was interested to hear about developments such as ploughing matches.

A number of the Scottish surveys provide accounts of ploughing matches and attitudes towards them. Together they provide an overview of the state of matches. The following are a number of accounts:

Dumbartonshire (1811)
There are at present no agricultural societies belonging properly to the county of Dumbarton. … This defect is in some measure supplied by the operations of the Glasgow Farmer Society, a respectable body of practical farmers, several of whom reside within the bounds of this county. Besides circulating information, and affording relief to unfortunate members, this society has been of use in exciting a spirit of emulation and desire to excel in the farm servants, by the institution of ploughing matches, and the distribution of prizes to those who distinguish themselves by superior proficiency in this branch of rural industry. These competitions are attended in some respects with a portion of inconvenience, raising spirit of jealousy among the competitors, and fostering a propensity to vanity and idleness in those who are successful. Still they are on the whole highly beneficial, in directing the attention of both farmers and ploughmen to the condition of their work-horses, the perfection of their implements, and that minute accuracy in performing every part of their work which is essential to correct, and (it may be added) truly profitable cultivation.
In those parts of the county which lie farthest from Glasgow, and where ploughing was formerly more neglected, similar competitions have been lately introduced for prizes given by the Highland Society of Scotland; and the spirit of improvement which they encourage, has already begun to display itself in those parishes to which the competition extends.”

Aberdeenshire (1811)
Agricultural societies established – Of these we have several in the different divisions, and even inferior divisions. In the division of Marr, there is one in Aberdeen, one in Alford, and one in Kincardine. These meet frequently for the purpose of improving in agricultural knowledge, and for deciding ploughing matches; and in one of the inferior districts of Alford, there is a Friendly Society. In the divisions of Buchan and the garish, and in various other places, there are Societies for all the above purposes; and their effects are found to be very beneficial both in the improved cultivation of our lands, and for the support of the infirm, the widows and the fatherless. But it is unnecessary to be more particular in this article”.

Stirlingshire (1812)
“Of the utility of instituting ploughing matches, in particular, some have entertained doubts. It has been alleged that the ploughmen who have been successful in these competitions became henceforth insolent and extravagant in their demands of wages; it is presumed, however, that the superior dexterity acquired, and widely diffused among ploughmen by these competitions far outweighs the evil complained of. There needs no other proof of this than the difference that is to be observed in respect to ploughing, between the cases of Stirlingshire, where ploughing matches are unknown, and the bounds of the Gargunnock club. In the former, the operation is performed, for the most part, in a slovenly manner; the ridges are broad and crooked; in the latter, the form of the ridges, and the manner in which the furrow is turned, furnish a model.”

The photographs were taken at the Easter Ross Ploughing Match, November 2017.