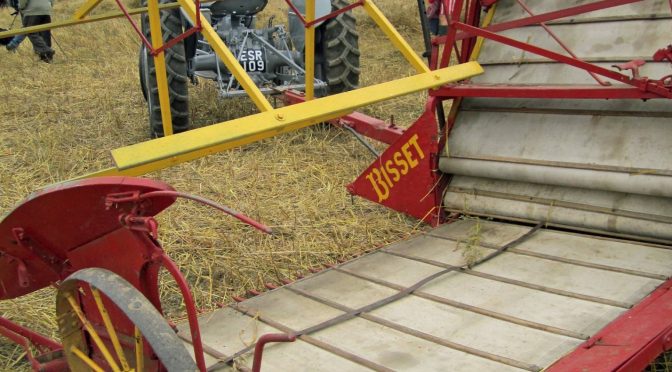 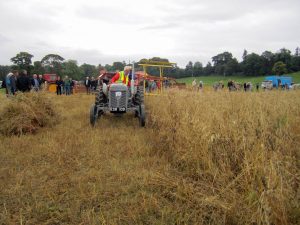 Grain harvesting technologies have changed considerably in the last 150 years – from the cycle, scythe to the reaping machine and the combine. Back in August 1922 the North British Agriculturist commented on the progress in tractor harvesting.

Back then tractor harvesting was still in its infancy in Britain: tractors were still oly used on a relatively small number of farms and the horse still remained king. But there was some progress:

“There is not the least doubt that the use of the tractor in harvesting is being put to a severe test this season, and if it emerges satisfactorily it will be a triumph for mechanical farming. On the
other hand there is equally no doubt that many farmers are metaphorically tearing their hair – when they have any left – over the shortcomings of their motive power. Many a man is calling himself a particular kind of fool for ever sinking so many hundreds of pounds in an engine. Now, it is unfortunately a very bad season for tractor work of this kind, while no one has as yet had experience enough in the new methods of working the tractor with the binder to get the best results; anyway, there is still much against a successful outcome. Take, for instance, a case known to us. When engine and binder are running all right then the work goes on right merrily. 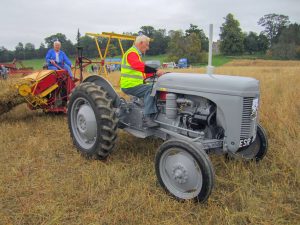 When turning at the corners the man on the binder
steps off, whips one sheaf only out of the way of the tractor in turning, and lithely regains his seat before the binder enters the corn again. Unfortunately, there is a lot of “wire-seed”-a variety of knot-grass-among the corn which frequently chokes the binder, necessitating a stoppage; next, the tractor will not start, from the sparking-plug being choked up or from such other such trouble, and so one worry follows another, and time is wasted; and our particular farmer friend wishes he had never bought a tractor at all! Then, the speed at which a tractor runs shakes a binder all to pieces, and the gear has often to be set on the second speed, which again means less work being done. Many who have been cutting at high tractor speed with the horse binder and finding to their cost how quickly the life of their machine is being reduced. It is possible, of course, to get large, powerful binders specially built for tractor work, but this means a lot more outlay of capital; and, while an 8-ft sitting bar is all right for a light standing crop, it is apt to be muddled up in heavy tangled stuff-especially in a year like this when so many fields have been “laid” by wind and rain, and grass seed has been sown along with corn.
Many farmers, on account of these troubles, who own tractors and believe in their use, have come to the conclusion that they are better served by horses in harvest time, and that the proper function of the tractor engine is rather to do and to make up against time the heavy work of ploughing, sub-soiling, cultivating, &c. Sub-soiling, 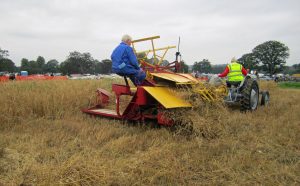 particularly, is coming to the front in these days, and, as we lately pointed out, it will now be possible to sub-soil in a way which is beyond the power of horses. In the case of the binder, however, three horses-or even two-can go steadily on for a good long day, while, if one horse in a team gets played out, another can be substituted-a point in favour of horse labour. Further, in harvest time, as a rule, the horses might just as well be working as running loose when the tractor is taking their place. Nevertheless, the tractor has come to stay in harvesting as in other kinds of farm work. Every farmer past middle age can remember the introduction of the binder, but some of the old brigade can recall the advent of the original reaping machine itself, and can also remember what a terrible “hash” it made of the job in its early stages. It took a long time to train men and horses to be able to handle one of these machines satisfactorily, and it took a long time to develop and improve them. The same applies to the string binder, and it is only a short time since they were brought to their present state of efficiency. Why! it was only this week that a well-known Lothian farmer remarked to us that he had never experienced a season when the binder had tackled so efficiently laid crops in many difficult positions, and he was quite surprised at the small amount of stuff which had to be dealt with by the scythe. Tis all goes to show that the binder, in its present state of efficiency, is being better understood by those who have to handle it. We are in a state of transition, and as the time goes on we shall get tractors and other machines more and more improved, an -what is of equal importance- we shall learn better how to use them. 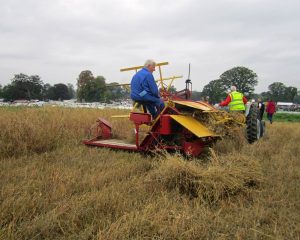 A notable English authority believes in, and advocates the harvesting of grain on the Californian method, i.e. the corn thrashed out as it is being cut, so that only the straw has to be stacked for use; but on this system the grain must be kiln-dried to store up. The tractor, of course, would give power such as could never be obtained from horses for this method of working. Such a modus operandi could only be adopted in the South of England, of course, but it would not be safe to condemn it off-hand, for one never knows the inventive age what developments the near future may see! Our grandfathers harvested their corn with the reaping-hook, and never dreamed of even a string-binder; now we have the tractor going with the binder, and time will improve the combination. There are other developments in connection with tractor work in harvesting, however, to which some 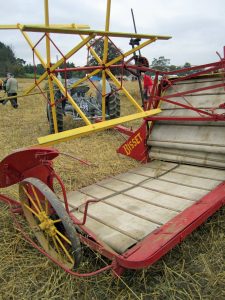 attention right be given. The stocking machine, though at present unsuited to the wet we have to reckon with in Scotland, is a practical success, and can now be hitched on to the binder, and the tractor will work both. The immediate future will likely see developments in this direction. Again, a common custom in the USA is to hang on a disc cultivator behind the binder and thus scarify the soil as the work of cutting proceeds, thus at one operation helping to get rid of weeds and making good preparation for the next crop. These are two or three subsidiary developments which, as time goes on, will become more and more common as part of tractor work in the harvest field.

It is interesting to note the predictions back in 1922 – and our views of looking back to what they thought in 1922.

The photographs were taken at Scotland’s Farming Yesteryear, September 2014.