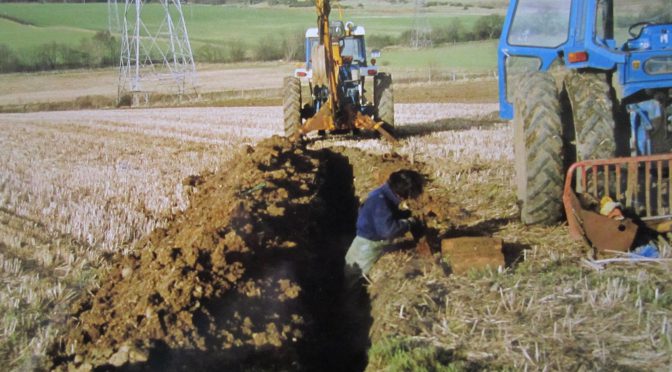 In 1889 Henry Stephens noted that “the part which drainage plays in agriculture can hardly be overestimated. Drainage, natural or artificial, is essential alike for pastoral and arable farming. Upon ill-drained land good farming of any sort is an impossibility.” 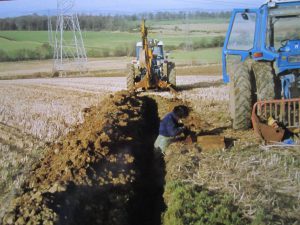 Winter was an important time for draining land on the farm.  Drain tiles were made by a number of tile manufacturers throughout Scotland, being a by-product of brick and tile works. Some noted brick and tile works were well-known and even renowned.  In the mid 1840s they included Robert Boyle, tile manufacturer, Ayr.  He exhibited at the Highland Show of 1844 a model of the improved Tweedale patent tile making machine.  By 1848 Alexander Cairns, Denny, Stirling, and George D. Dodds, Airdrie, were both exhibiting their own machines at the Highland Show.  Their numbers were to significantly increase in following years as the drainage revolution gathered apace on Scottish farms.

By this time a number of implement and machine makers were making draining tools.  Amongst the most important was William Cadell and Sons and Co., Cramond Iron Works.  Associated technologies also developed, such as the need for ploughs to assist in the draining work.  In 1848 George Ponton, Grougfoot was making a plough for filling in drains.

A century later the face of drainage on Scottish farms and on marginal land had changed dramatically.  If Scotland had led the way in the drainage revolution with James Smith of Deanston, it continued that innovation into the 1950s.  While there were a number of implement and machine makers in England that provided drainge implements and machines, including mole drainers, cultivators and trenchers, one Scottish maker came to have a great reputation: James A. Cuthbertson Ltd, Station Road, Biggar, Lanarkshire.

By 1952 James A. Cuthbertson Ltd manufactured a range of drainage tackle including a tractor drawn trench cutter suitable for tiles, pipes or cable laying, a trench cutter, Type F, suitable for plantation work, a Type S, double sided mouldboard tough , suitable for moorland draining and afforestation and sugar cultivation, the Type R, double sided ridging plough, designed for sisal grass plantations and ground preparation for cotton, groundnuts, and a hydraulically operated grab for use with the “Atlas” loader for ditch cleaning.

The company won a number of important awards for its drainage machinery including a silver medal from the Royal Highland and Agricultural Society for its drainage plough in 1948, another for its deep drainage plough with tile-laying attachment in 1950.  The company was also noted for its land improvement machinery including its bracken cutter which won a silver medal in 1949.  It entered other machines for the new implement award of the RHASS In 1948, including the grassland rejuvenator and lime spreader, its double-purpose double furrow forestry planting plough in 1949 and its lime-spreading outfit in 1951. It also developed the “Cuthbertson” half-track for Fordson Major conversion.  For his innovative work James A. Cuthbertson won an OBE in the New Year’s Honours list in 18953.

The company was eager to demonstrate its machinery.  James undertook a series of talks on farming and the agricultural engineer on marginal land in 1949.  The company widely demonstrated its machinery.  In June 1951 it advertised in the Courtier and Advertiser that it “will shortly have a hill drainage machine in the Milnathort/Dollar district.  Ground is inspected and quotations given free.”  In that month, another was on the ground in the Duns district of Berwickshire.

Scotland played an important role in the drainage revolution of the mid nineteenth and twentieth centuries.  However, you won’t see many aspects of that revolution at the rallies around Scotland.