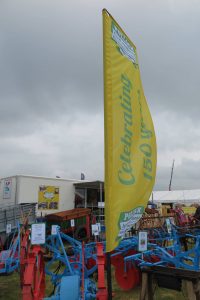 If you were at Ayr Show yesterday you would have noticed the rather striking and well-filled display of farm implements and machines by Pollock Farm Equipment.

150 years is a long time to be in business. There are few Scottish agricultural implement and machine makers that have managed such an achievement. Andrew Pollock of Mauchline, later A. & W. Pollock, Mauchline, and Pollock Farm Equipment, have been notable makers of a wide range of implements and machines, which are first served the farmers of Ayrshire. Now the Pollock name is known world wide. 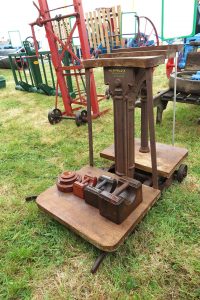 Alongside the modern cow brushes, bale handlers and scrapers, there was a range of implements and machines that were associated with the Pollock name. They included carts (Pollock was one of the largest cart makers in Scotland), a livestock transporter, potato diggers, curd mills, land rollers, weighing scales and barrows. The company had also been an agent as well, and this was denoted by the Harrison McGregor (Albion Works) cake breaker. The company also took over the manufacture of machines from other makers, and illustrated in this aspect of the company’s history was the Barford & Perkins tedder (or kicker) – it was a key piece of new haymaking machinery, being awarded the first and second prize in th eRoyal Trials at Darlington in 1895. 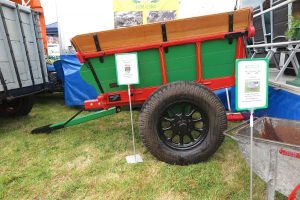 Implement makers also moved around the trade, for example to learn their apprenticeships, or learn aspects of the trade. John Pollock had been a management traine at the Blackstone’s between 1953-58. This aspect of the company was illustrated through a Blackstone swathe turner. 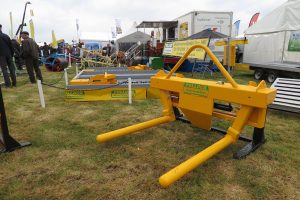 If you looked closely, you might have also noticed the name plates from Andrew Pollock, taking the history of the company back to the late nineteenth century.

Lots to see on the stand, bringing to life the great achievements of the Pollock name in Ayrshire.

If you were not at Ayr, enjoy the photographs of the stand.

Many thanks to Jimmy McGhee and his family for all their hospitality.