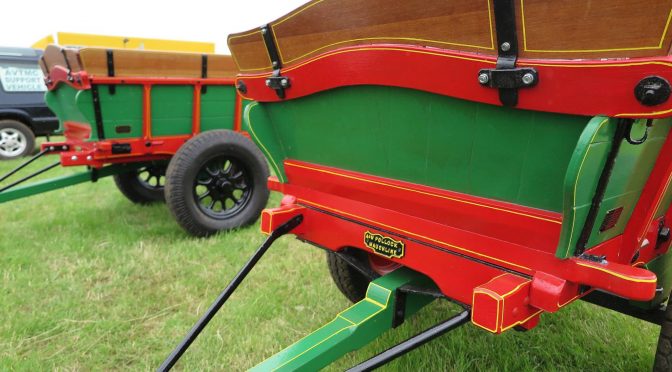 What were carts like during the agricultural revolution of the late eighteenth century when there were significant change stop the appearance of the landscape and the way the land was farmed?

Carts were one of a small number of agricultural implements to be found on Scottish farms. The writer of the county agricultural survey of Perthshire, James Robertson, Minister at Callander, wrote a detailed account on them. It provides a clear account of what they looked like, how they were constructed and also their use. It is worth quoting at length:

“All the implements of husbandry are constructed according to better models and made of better materials, than formerly. So late as 20 years ago, no plough was to be seen, but on a gentleman’s farm in the low lands of this county, except that which is now called the old Scots plough, drawn by four oxen and two horses, or by four horses and two oxen. In the Highlands the same kind of plough was universally used, drawn by four horses all yoked abreast. Instead of carts with wheels moveable upon the axle; that clumsy machine, in which the wheels were fixed to the axle, described by the President of the Board and still to be met with in the northern counties, was very common in all the low lands of Perthshire. The wheels had no spoaks or naves. They were composed of three sections of solid plank, fixed together and rounded like the bottom of a large cask; and the axle was fixed in the centre, going through the middle section. The shafts had two pins that embraced the axle and made these awkward wheels tumble along; from which circumstance they were named tumblers. A timber mallet wrought by the hand was all they had for a roller to break the clods in the stiff land of the cases. Fanners were very rare, and threshing machines not known. In the Highlands, the people performed distant carriages of bulky commodities with hurdles, fixed on each side of the horse, by means of a hooked car saddle, still remembered by the name of currants.

Less bulky commodities were carried in hampers or baskets, made of young hazel, with a square mouth, and fixed on the horse’s back with the dame car saddle. Near carriages, particularly the ingathering of their hay and corns, were executed with a fledge, which consisted of two shafts reaching from the collar in the horse’s neck to the ground, with cross bars near the horse’s hind feet, for a bottom, and at least seven erect bars behind, for keeping on the load. This fledge succeeding the hurdle and evidently required some road, wghereas the hurdle could be used wherever it was possible for a horse to walk. The name which this sledge has in the language of the Highlands shows that it was the carries of the Gaul’s in Caesar’s time; and the English name car is borrowed evidently from the Latin. Upon this sledge or car the fanners in the Highlands carried out the dung in large baskets, diverging towards the mouth in the shape of an equilateral triangle, one side of the basket lying on the bottom or floor of the sledge, the dung was carried tto the field in baskets with moveable bottoms, like a valve, fixed to the hooked car sale, which opened in the bottom by a pin and dropped the dung where it was necessary. On these sledges they carried home their peats in other baskets of a square form and of such capacity as to hold a horse’s load; but where the road was so steep that the car could not be used. They adapted small baskets of the same form fixed on the horse’s sides to the hooked car sale. In many parts of the Highlands, these sledges are still employed for carrying grain nd hay, as well as peats; especially where the roads are so rugged and uneven as to render the use of carts impracticable. However censurable this practice may appear to a stranger, yet in some situations it is unavoidable; and at first sight it would seem incredible, with what dispatch and safety the people perform their work and also with fewer hands than carts or wagons would require. Sledges are indeed going out, and ought to be so, where the cross roads in a country or the by-roads in a farm are passable by carts.

But notwithstanding every improvement which the roads have undergone; the principal lines of communication having deservedly claimed the first attention of the public; this has hitherto left the roads in other situations, in such a state, especially where the country is rocky or hilly, that carts would be overturned every moment. Distant carriages in every part of this county, where the journey is on the king’s highway, are universally performed by carts.
It is to be hoped, if the wagons used in the moor lands of Yorkshire, could be introduced with advantage into the Highlands of Scotland, as Mr Marshall says they can, that the Board will favour the country with a drawing of one, accompanied with directions how to use it.”

The photographs of carts with pneumatic tyres dating from the 1930s onwards were an important development in carts. The photographs are of carts made by Pollock and Jack, both of Ayrshire, at the Ayrshire Vintage Agricultural Machinery Rally.