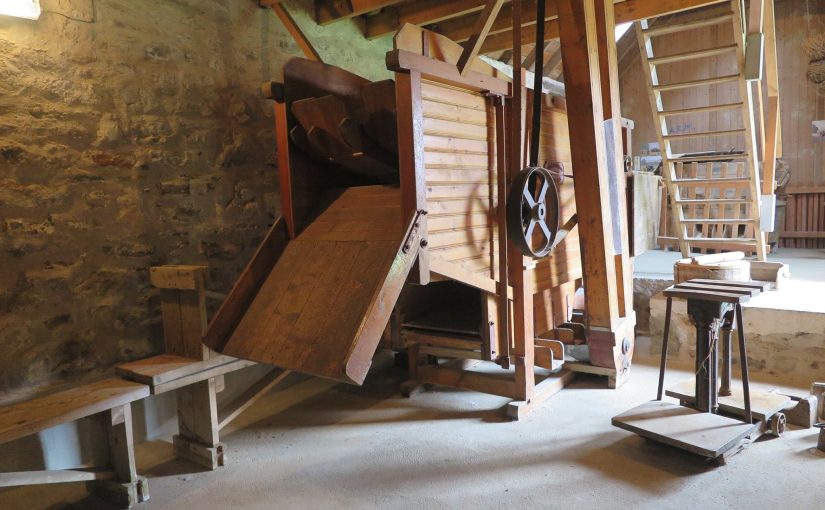 One of the well-known millwrights on Orkney was John Scarth, Mill Street (later on Ayre Road), Kirkwall.

In March 1947 the Orkney herald published an account on the history of this millwright, noting 62 years of progress of the business. It is quoted at length:

“The late John Scarth, father of James T. Scarth, present proprietor of the firm of John Scarth, Kirkwall, commenced business as an agricultural engineer and millwright in Kirkwall in 1885.Threshing mills While Mr Scarth’s chief interest in those days was to design and manufacture threshing mills, it may also be mentioned that he imported some of the first binders into Orkney.

The threshing mills installed then were driven by wind, water or horse power. It is interesting to note that several of these machines are still functioning at the present time. About the beginning of this century, motive power began to be installed on many farms in Orkney, in the form of oil engines; to be followed late on by petrol, petrol paraffin and now diesel engines.

The fact-and it is a notable fact-that this form is famous throughout Orkney for the manufacture and installation of threshing mills is due very much to the untiring efforts of John Scarth in the pioneering days, and to his earnest desire to give of his best towards the building of the solid foundations and highly satisfied clientele of his growing business.Mr Scarth’s highly respected personality was lost to the community in late 1918, after an active life in which much had been achieved in setting up an efficient engineering business, capable of advancing with the ever growing demands of the Orkney farmer.

Chief millwrightMr David Davidson then assumed the capacity of Chief Millwright. Mr Davidson, being a capable workman and having served under a capable master, was able to carry on the good work, and continues to do so to-day. He is responsible for designing the type of threshing machine which the firm builds at the present day. This is a machine specially designed to handle Orkney’s grain crops. Its efficiency can be judged from the fact that the vast majority of Orkney farmers use it to-day.

Orkney farmers use it to-day.

Although the material position remains difficult, orders are coming in rapidly, so if you are thinking of installing a new Scarth thresher or overhauling your existing one, you should contact the firm NOW.

Since the firm moved into its present spacious premises at Ayre Road, Kirkwall, continued advance has been made in meeting local demands for engineering repairs. The firm now undertakes cylinder re-boring, oxy-acetylene and electric welding, along with all general machine shop repairs.

During the late war years, the firm was called upon by all the services, notably the Admiralty. Through the determination and skill of the workshop staff under the able foremanship of Mr Robert S. Robertson much was done to keep the smaller craft of the Royal Navy, while operating in our northern waters, services to a high state of efficiency.During those years labour and material were reduced to a minimum. Only repairs of an essential nature were carried out for farmers. It is, however, remarkable that such work was undertaken at all, in the difficult conditions prevailing at that time, and it is said much for the organisation which made it possible.

The firm is also the appointed sales and service distributor for “Ferguson” agricultural machinery, equipment for which there is an ever-increasing demand in Orkney.

Ploughing demonstrations have been carried out at Ness of Redland, Stronness; at Skail, Sandwick, and at Roadside, Snoogro, Orphir. More public demonstrations will follow, when the weather permits. Mr D. A. G. Kynoch, who underwent a course of instruction at the Ferguson Works at Coventry, was the demonstrator on each occasion.