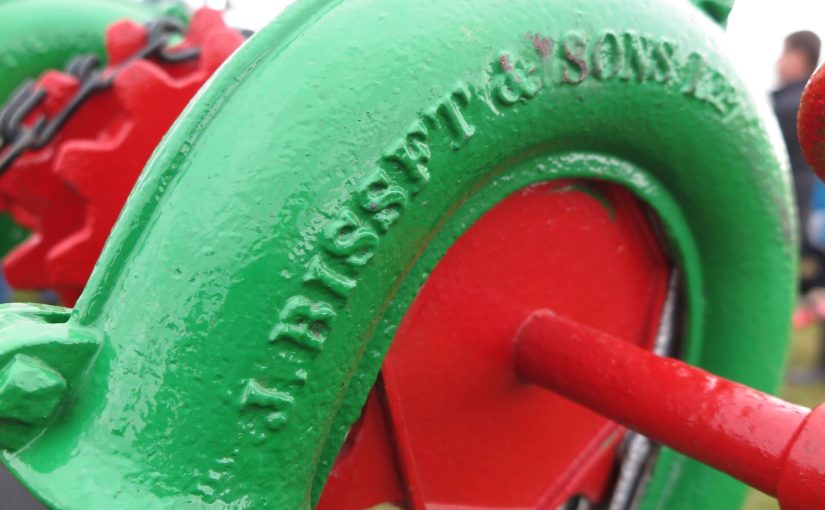 One of the well known implement and machine makers in Perthshire was J. Bisset & Sons, Marlee, then Greenback, Blairgowrie.

The company traded from at least 1867 until the mid 1960s. On 16 June 1966 the Directors passed a resolution to voluntarily wind up the company; it was dissolved on 20 November 1970. The company was noted for its potato diggers as well as its reaping machines and binders.In 1877 the company opened a new implement works. There are only a few accounts of implement works and new implements works so this account is a valuable one. The Huntly Express provided an in-depth account of the new works in May 1877. It is quoted at length:

“Messrs J. Bisset & Sons, the well-known manufacturers of reaping machines at Marlee, near Blairgowrie, have this spring been erecting extensive works at Greenbank, close on the west of the town. These new works, which have been started this week, form a conspicuous feature of the towns as approached from the Perth and Dunkeld Roads. The building is a handsome and substantial structure, 100 feet long by 75 feet wide, and has three roofs, each of 25 feet span, and supported on pillars. It is lighted entirely from the roof.

Although at Marlee, where they have been established for over 40 years, the Messrs Bisset had premises where during the summer they turned out four finished self-delivery reapers a-day, they were obliged to decline many orders for want of the means of executing them. The new premises will not only meet this want, but also save an immense amount of cartage to and from the station, and their proximity to the town will also be advantageous to the workmen, who will more easily find house accommodation here than at Marlee. A visit to this spacious workshop will show that the firm, who confine their manufacture to reaping and mowing machines and potato-diggers, have brought to bear o their business improved machinery and mechanical skill such as have hitherto been employed only in the construction of the higher and more complicated classes of machinery. Eight forges on the south side of the works are supplied with wind from a fan-blast. Among the more noticeable machines to be seen in the works are a more powerful self-acting steam hammer, a punching and shearing machine which goes through a ¾ inch plate of iron as easily as if it were cutting putty, several heavy self-acting turning-lathes, a machine for planning iron drill machines, a tool-grinding machine of the most improved construction, besides circular saw benches, &c. Both inside and outside are to be immense quantities of the raw or partially-manufactured material, in the form of timber, metal castings, and iron and steel forgings.

A new premises to expand a successful business!