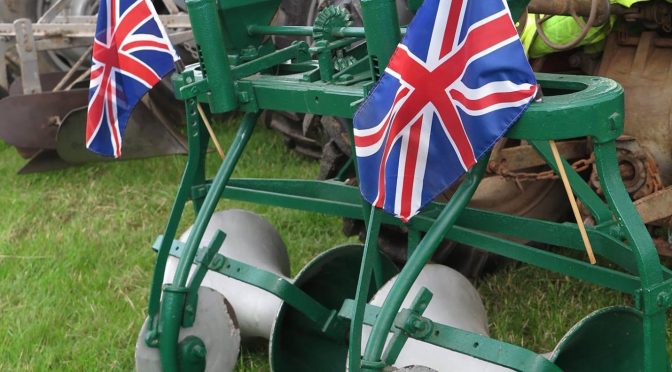 One of the major Scottish implement and machine makers was John Wallace & Sons, Graham Square, Glasgow.The company existed in various forms until the late 1960s, when it was absorbed into 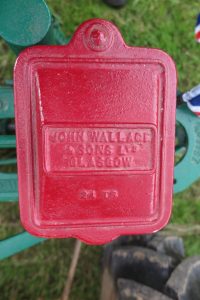 another much larger company, resulting in the loss of the Wallace name. These forms included: John Wallace & Son; John Wallace & Sons (from at least 1879); John Wallace & Sons Ltd (from 1897); Wallace (Glasgow) Ltd (in 1925); and John Wallace (Agricultural Machinery) Ltd (in 1965). The company was renowned for a wide range of implements and machines including ploughs, turnip sowers, reapers and mowers, potato diggers, iron buildings – there are still a few of them to be seen around the Scottish rally fields.

A key episode in the history of the business took place in December 1896 with the formation of the limited company of John Wallace & Sons Ltd. Its certificate of incorporation was dated 13 December.

The company’s memorandum of association provides insights into the newly formed company and how it was to operate: 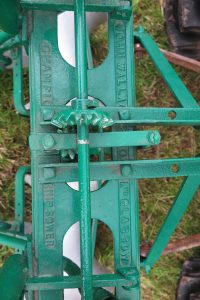 “The objects for which the company are established are:
(a) to acquire the business carried on in Glasgow and elsewhere under the name or style of John Wallace & Sons, agricultural engineers and implement makers, Graham Square, Glasgow, and to purchase and undertake the whole of the assets and liabilities of such business upon the terms set forth in an agreement between the said John Wallace & Sons on the one part and James Colquhoun LLD, writer, Glasgow, as trustee for this company, on the second part, dated the twenty-sixth day of December, 1896.
(b) to carry onbusiness as agricultural and general engineers, millwrights and implement makers, and ironmongers, in Glasgow and elsewhere, and to make, buy, sell, produce, alter, and deal in agricultural implements of every kind and description, and generally to carry on any business of a character similar or analogous thereto, or which will contribute to or facilitate the same, or which, by the advance or increase of knowledge or exigencies of labour, may be substituted therefor. 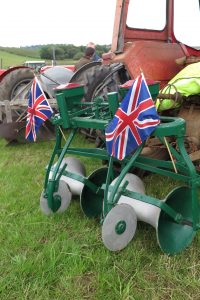 (c) to manufacture and sell, either by wholesale or retail, every description of goods connected with the agricultural industry of the country, and for that purpose to acquire suitable premises, either by building or purchasing the same, and to lease or buy, sell or exchange, land, or land and buildings, free from or subject to any feh-duty, ground, annual rent, tax, reservations of mines and minerals, or any restrictions, conditions, and agreements whatsoever, or subject to any bond, mortgage, or charge or other encumbrance. …”

In this form the company continued until 1920. On 16 July 1920 the company passed a special resolution to wind up the company; this resolution was confirmed on 2 August 1920. Thereafter, the company took on another form, using the same name.

The photographs were taken at the Ayrshire Vintage Rally, July 2017.