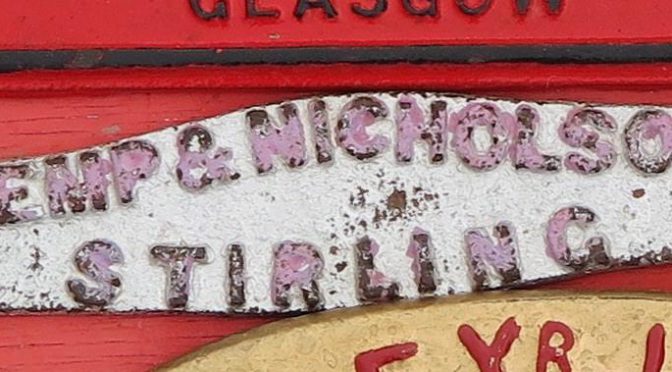 If you were a farmer or agriculturist in the Stirling area before the early 1930s you would have been familiar with the eminent name of Kemp & Nicholson of Scottish Central Works.

The company conducted business from their premises in Dumbarton Road, Stirling, as Kemp, Murray & Nicholson, in 1858. The company had further business activities further east in East Lothian. In the North British Agriculturist in November 1858 stated that “Kemp, Murray & Nicholson have removed from their branch establishment, Haddington, to their headquarters in Stirling where they have been in business for the last 10 years and where their business will henceforth be exclusively carried on.” By 1859 the company described itself as agricultural implement manufacturers, though by 1870 it had expanded its range of trades to be joiners, agricultural implement and reaping machine makers and engineers, activities that it became renowned for in the following decades.

The company continued to trade until shortly after the death of Major Kemp Smith in March 1930. The North British Agriculturist had commented favourably on him and his role within the Scottish agricultural implement and machinery trade in July 1894. It wrote:

“Mr J. Kemp Smith-Although the youngest of the Scottish implement trade, Mr Smith is not by any means the least important member of it. By force of circumstances he occupies the enviable position of principal in Messrs Kemp & Nicholson’s, one of the oldest and most extensive businesses in the agricultural implement trade. Mr Smith is a grandson of the late Mr john Kemp, of Stirling, whose career we fully detailed at the time of his death last autumn, and who, for some years of ill-health prior to his decease, sought for means whereby he could be relieved of the onerous duties which a large engineering business involved. While considering the advisability of forming a limited company against disposing of the whole business as a going concern by private sale, Mr Kemp was delivered from his dilemma by his being joined by his grandson, then only about nineteen years of age. Mr Smith started his apprenticeship in the works nine years ago, on 7th July 1884, and for nearly five years engaged in the practical work in the workshops. Upon his grandfather’s death, in August last year, Mr Smith found himself, with a comparatively short experience, at the head of the Scottish Central Implement works, a position which many older men, from its great responsibilities, would have hesitated from taking up. Mr Smith has, however, with great pluck, assumed the command of the works, as they are now busily employed with the production of all sorts of tillage and harvest implements, as well as of farm carts, of which latter Mr Kemp made quite a speciality. Mr Smith is a young man of good capabilities and engaging manner, so that he bids well worthy to fill the place so long occupied by his late respected grandfather.”

Kemp & Nicholson: a well-respected and long-established implement and machine maker that was renowned for its manufactures and moving with the times.