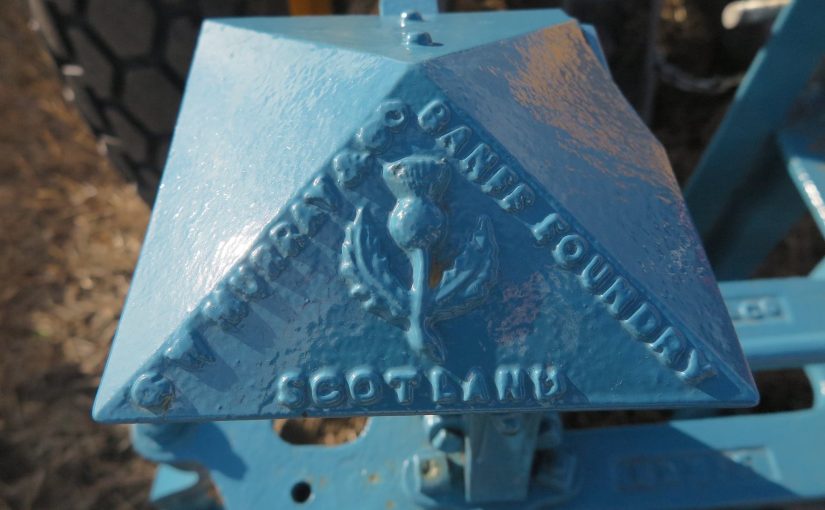 If you were in north-east Scotland before the mid 1890s you would have been familiar with the name of G. W. Murray & Co. Banff Foundry, Banff.The company was already in business by 1868. It undertook a range of trades as an agricultural implement maker, iron founder, engineer, mechanical engineer, iron merchant, pump manufacturer and smith.

G. W. Murray & Co., patentees of potato planters and manufacturers of crown threshers for hand and foot power and also for pony power, Banff.” A patent from 1870 was for “improvements in means of apparatus employed in ploughing or tilling land”. Another from 1871 was for “improvements in apparatus for ploughing or tilling land”. It also entered its implements and machines for the highly prestigious trials of the Highland and Agricultural Society of Scotland. They includes the trials of potato planters in 1883, ploughs (1883), grubbers (1883), implements for autumn cultivation of stubble (1885), and implements for spring cultivation (1885).The company undertook significant publicity work, allowing it to reach a Scotland wide as well as an international market for its manufacturers. It exhibited at the Highland Show from 1868 until 1896. It exhibited in all the Society’s eight show districts, giving it a reach throughout al of Scotland. It advertised in the North British Agriculturist from 1868 until 1897.

The company was one for the few Scottish companies to have received an award from the Royal Agricultural Society of England – for a double furrow plough in 1870. In 1872 it was awarded a first prize of 10L for a double furrow plough not exceeding 3.5cwt a highly commended for a double mouldboard or ridging plough not exceeding 2.5cwt. In 1874 it was awarded second prize of 5L for drill,. without manure box, for turnips and other roots on the ridge. In 1880 it received a silver medal for a two row potato planter.

One of the key figures in the company was George A, Duncan. In 1893 the North British Agriculturist provided a short account of him:

“Mr George A. Duncan is proprietor and manager of the well-known engineer and iron foundry business which has long been carried on in Banff under the style of G. W. Murray & Co. Mr Duncan, who is only in his thirty-third year, spent a good few of his earlier years in Australia. On his return to this country in 1886, the late Mr G. W. Murray, who formerly owned the business, appointed Mr Duncan manager of the Banff Foundry, as well as of the iron merchant’s business, which he also carried on under the name of Murray & Blake. Mr Duncan held these joint offices till June 1887, when Mr Murray died, but he had given so much satisfaction with the management of the business that he was immediately appointed to the same offices by Mr Murray’s trustees. In April 1888, Mr Duncan purchased the premises, plant, and goodwill of the Banff Foundry, and ever since he has on his own account carried on the works, as well as an iron merchant’s business, with marked success. The firm manufacture all kinds of agricultural implements-harrows, turnip sowers, turnip sowers, broadcast sowing machines, grubbers, ploughs, &c all of which have a large sale. In the end of last year the works were completely destroyed by fire, and operations have consequently been carried on at a great disadvantage since, but everything is now in a fair way to being completed, and full work resumed.

The company continued in business until 1897. An auction sale was held on 18 August of “engineers’, iron founders’, and agricultural implement makers’ plant” “owing to the proprietor giving up business.When G. W. Murray gave up his business, the Banff Foundry was taken over by Watson Brothers. Their business referred to itself as “Watson Brothers (successors to G. W. Murray & Co), Banff Foundry”. Like George W. Murray, Watson Brothers also continued to make a range of agricultural implements and machines including reapers, turnip drills, field rollers and harrows. William Watson, one of the brothers, died in 1924, after which the Foundry changed ownership to become Banff Foundry & Engineering Co. Ltd. It continued in business until 1951 when a new company was proposed Banff Foundry & Engineering Co. (1951), Ltd which continued until 1954.

A letterhead from 1951 sheds some light on the earlier history of the company. It states “Banff Foundry & Engineering Co., Ltd, agricultural implement makers and engineers, incorporating G. W. Murray & Watson Bros. est. 1820.”There are still a few implements and machines from the Banff Foundry that can be seen around the vintage rallies today. When you look at them, you are reminded of a long-established and well-renowned Scottish business with an international reputation.

The photographs were taken at the Daviot Vintage Rally, October 2018.