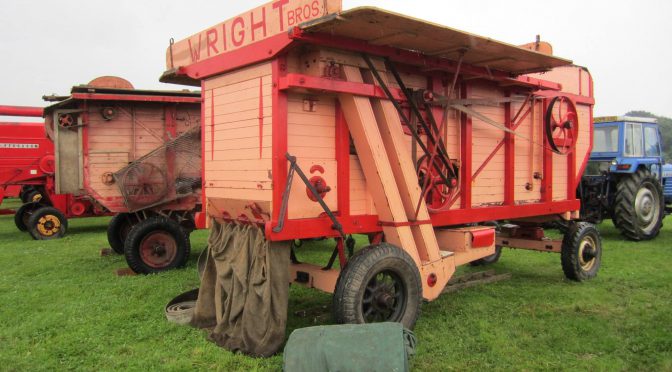 By 1905 Wright Brothers of the Boyne Mills, Portsoy, made reapers, drillers and threshing mills.  It was their threshing mills, and as a millwright that the company was especially renowned.

At a trial of threshing mills in the parish of Auchterless in March 1908 the Aberdeen Journal favourably described one of the company’s mills: 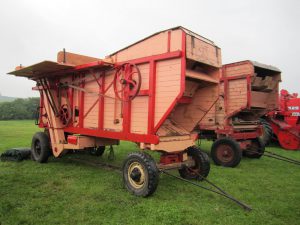 “Mr James Gammie, tenant of the farms of Knockleith and Netherthird, Auchterless, has had a first-class new threshing machine placed in his barn at the last-named farm.  The machine has been in use for some time, but has only recently had all the connections fully completed, and it was yesterday put on trial.  The trial was carried out in presence of the millwright and a considerable number of interested agriculturists.  The mill is driven by a 12-feet water wheel, with steel buckets.  It is 3 feet 6 inches wide, with rollers and crank shakers.  It is fitted with all modern dressing appliances, and deposits the grain, completely dressed for market, at any desired point, in a spacious loft, from a moving spout over the rafters.  The chaff is driven by a blast to a byre, 80 feet distant, and in its course turns a right angle, where the barn joins the stable wing. When delivered, the chaff is free from short straw, and in fine form for bedding purposes.  The machine is guaranteed to thresh and dress 8 quarters of grain per hour, and on trial, with somewhat damp and rank oats-a severe test-was easily doing one bushel per minute.  The wood-work is of well-dressed and varnished pitch-pine, and the whole workmanship and materials reflect the highest credit on the engineers-Messrs Wright Brothers, Portsoy, Banffshire.  A powerful corn bruiser in pitch-pine frame, and driven by an intermediate shift from the water wheel, has also been placed in the barn by the same engineers.” 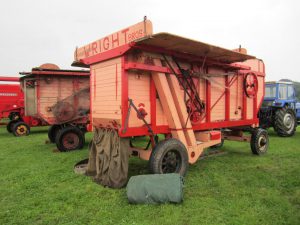 From the 1920s the focus of the company’s activities was on threshing mills.  At the Highland Show in Inverness in 1932 it exhibited its full finishing threshing mills and single dressing mills.  At that show the Aberdeen Journal noted that “many of the firm’s friends and customers in the North-Eastern counties are certain to pay a visit to this stand and see how these mills are equipped in the most up-to-date fashion”.

In February 1927 the Dundee Courier described the installation of a new threshing plant from the Wright Brothers.  It wrote favourably of this new installation:

“A complete threshing installation, consisting of an Allan oil engine 17hp, together with 42 in-high power mill and Bissett trusser, and a grain conveyor, have been installed by Mr James Syme, Wormit Farm.
There was a large gathering yesterday of friends in the district to witness the installation of the mill, which was typical of the class of work done by the well-known makers, Wright Bros., Portsoy, and was supplied by Messrs H. W. Mathers & Son, Perth, the local agents.”

Another account by the Aberdeen Journal in November 1936, was also favourable: 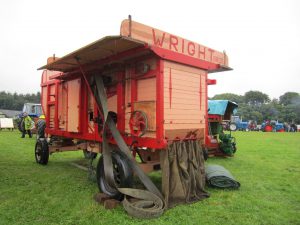 “Mr Leslie Duncan, Netherton, Fisherfield, Rothienorman, has installed a new threshing plant.  The mill is one of the latest types, high speed, and three-feet wide, with sizing screen, barley owner, double fans, and a chaff and cuffing blast to covered court.  The grain is conveyed to the roof by elevators and carried along the loft by belt with clocks in a case, with trapdoors to let the grain fall where desired.  The whole of the spindles are run on ball bearings, and the mill is driven by a powerful Allan oil engine.  Messrs Wright Bros., Portsoy, were the makers, and on a trial the plant gave every satisfaction.”

The company moved with the times.  By the mid 1950s it was described in trade directories as an agricultural engineer, implement, machinery and equipment dealer and manufacturers, and as dairy engineers, dairy farm equipment suppliers.

However, changing times in agriculture also brought an end to the company. Incorporated as Wright Bros. (Boyne Mills) Ltd, on 28 June 1948, the company passed an extraordinary resolution to voluntarily wind up its activities on 7 February 1955.  Its final winding up meeting was held on 17 October 1956.