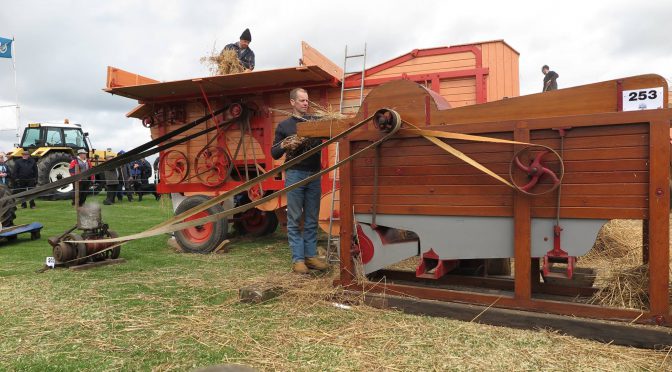 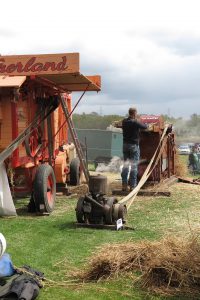 In 1929 James Ferries & Co., Inverness, exhibited the “Marvel” threshing machine at the Highland Show. It was invented by James Ferries. It was made from well-seasoned pitch pine, morticed and teoned and firmly secured at the joints by bolts, The linings are of white-wood or red-wood. The Scotsman described ts working parts:

“There are three shakers running the full length of the mill, and mounted on a three-throw crank-shaft, which is run on ball bearings. The centre throw of the crank-shaft is so designed as to convey motion to the riddle-casethrough a long connecting rod. The riddle-case is built in one part, and is so constructed that the chaff and cavings are delivered underneath the straw delivery shute. The light grain is delivered from a spout at the tail end of the riddle-case, 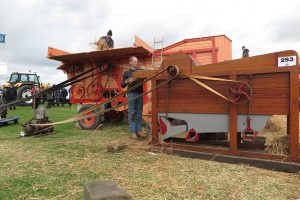 while the finished sample of grain is delivered at the drum-end, where it can be conducted into elevators either for bagging the grain or delivering to a loft. The fan is fixed between the mill frame, and is the full width of the machine. The elevators are urge cup and belt type, the grain being fed into the elevator from the sprout attached to the riddle case.” 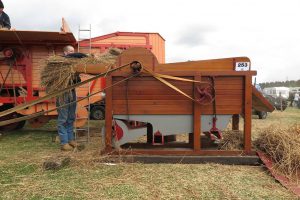 There are still examples of the Marvel around the Scottish rally fields. If you see one, marvel and how this small thresher worked.

The photographs of the Marvel threshing mill were taken at the B. A. Stores. Vintage event, May 2016.