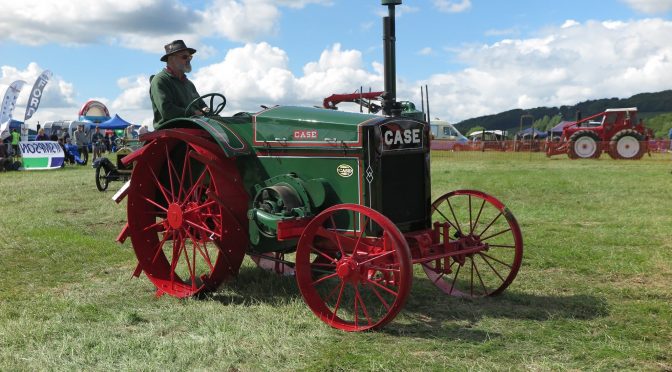 The Royal Show was the most significant agricultural show in England. While it was largely attended by English exhibitors – there was a huge number of English implement and machine makers – a number of Scottish exhibitors made the sometimes long journey to the English show. What did the Show look like 100 years ago and which Scottish implement makers exhibited at it?

The Scotsman newspaper provides an account of the Show:

“The extensive section of the show devoted to agricultural implements and machinery, seeds, feeding stuffs, and manures is always inspected with much care by agriculturists, who are able to watch and profit by the progress of invention in the production of labour-saving and effective appliances. There are 371 stands with 4000 exhibitors, representing practically every department of commerce, catering for those engaged in the cultivation of land and the breeding of livestock. The requirements of the great landowners, the gentleman farmer, the practical agriculturist, and the small holder, are all kept in view, and the miles of shedding included in this section are fitted with machinery, implements, seeds, and their produce, and the numerous requirements of a modern farm and estate.

Scottish exhibitorsAlthough the Show is so inaccessible for Scottish implement makers, there are no fewer than sixteen exhibitors from north of the Tweed, an increase of six compared with eighteen years ago. Some of these are well known and enterprising firms that are never absent from the Royal Society’s annual gathering, and a few make their appearance in the Society’s showyard for the first time. Of the eighty-one entries of new implements, three are from Scotland. They comprise the latest improvements in things mechanical as applied to the farm. The Glasgow tractor, which is manufactured by the D.L. Motor Manufacturing Company, Motherwell, is shown on the stand of John Wallace & Son, Glasgow. A working model has already been tested on three farms in Scotland-at South Hillington, near Glasgow, Dolphingstone, Tranent, East Lothian, and Wellfield, Gateside, Fife. Mr G. Bertram Shields, who was convener of the Implements Committee at the tractor trials of the Highland and Agricultural Society, testifies that the Glasgow tractors will revolutionise the whole tractor building of the present day, and adds that “as a practical proposition it will have advanced, or rather shortened, the time when we will have the tractor an everyday tool on most farms. The tractor can plough 1 ¾ acres of medium quality land per hour, working this at a depth of 8 ½ inches to 9 inches in stubble land, and 6 to 7 inches in lea land, with a composition of 1 ¾ gallons per acre. The cost under favourable climactic conditions works out at 7s 8d per acre, and under unfavourable conditions at 9s per acre. The tractor seems to have solved the difficulty of ploughing steep land, for it has gone up a gradient of 1 in 5, pulling a three furrow plough in medium soil working at a depth of 7 inches.

Messrs Alexander Jack & Sons, Maybole, exhibit an artificial manure distributor which has been manufactured by Mr Archibald Hunter, blacksmith, Cross Hill Road, Maybole. It is adapted to be attached to any ordinary construction of a drill or ridging plough. By its use the drawing of the drills or ridges and depositing of the manure in the drills can be done at one operation, which means a considerable saving in time and labour, and ensures a more even distribution of the manure than is attainable by hand sowing, and with very little addition to the draught. The hopper is capable of holding about half a cwt of manure, and can distribute from five to twelve cwts per acre. The manure distributor was tried by several Ayrshire farmers last spring for their potato and turnip crops, with satisfactory results. Mr David Wilson, East Linton, Prestonkirk, shows a potato raiser of his own manufacture. Since this machine was in the Royal and Highland Society’s competitions it has been enlarged, so that the straws or haulms get passed through. It however. Retains its salient feature, that it cannot damage, bury, or spread the tubers, thus saving labour in gathering. He also exhibits two different types of potato sorting machines, a haulm or straw cutter for one horse, which takes two drills at once, a washing machine for potatoes, and carrots, and an ingenious machine which mixes and riddles artificial manure at the same operation. The Albion Motor Car Company shows a hydraulic tipping wagon of 32hp which can carry a load of 3 ½ tons, and a motor lorry, 32 hp which can carry a 3 ton load.

Messrs Barclay, Ross & Hutchison, Aberdeen, have on view threshing machines to suit the needs of all sizes of farms. They have in all six types for fitting into barns. Messrs Robert G. Garvie & Sons, Aberdeen, exhibit specimens of their oil engines and threshing and finishing machines; and Messrs Marshall & Philip. Aberdeen, show spraying machines for lime-washing and fruit trees. Messrs George Sellar & Son, Huntly, exhibit a varied collection of ploughs, including their well-known double furrow self-lift tractor plough, manure distributors, and harrows.

From the south of Scotland there are two exhibitors. Messrs J. & R. Wallace, castle Douglas, show their milking machines which gained the Royal Society’s silver medal, with new patent pulsators requiring no lubrication; and a manure distributor with revolving axle. Messrs John S. Millar & Son, Annan, have forward several specimens of their windmill pumps and cream separators, combining petrol, motor and separator in one unit. Messrs William Elder & Sons, Berwick on Tweed, are again well to the front with an extensive stand comprising many articles of utility in farm husbandry, including broadcast sowing machines and drill rollers and scarifiers.

Messrs John Wallace & Sons, Glasgow, have a varied assortment of ploughs, manufactured at the Oliver Chilled Plow Works in Indiana, potato planters, potato diggers, manure distributors, and harrows; and Messrs Watson, Laidlaw & Co., Glasgow, show a number of cream separators for steam and hand power. Messrs Alex Jack & Sons, Maybole, are well represented by potato raisers and manure distributors; and Messrs Thomas Hunter & Sons, Maybole, have an excellent selection of the cultivating implements for which the firm have earned a name. In addition, they show their Scottish farm and harvest carts. The Edinburgh Roperie and Sailcloth Co., Leith, exhibit plough lines and waterproof covers.

An attractive stand is provided by Messrs P. & J. Haggart, Aberfeldy, who demonstrate to farmers and wool growers what can be produced from homegrown wool. The stand is draped with the Duke of Rothesay’s tartan, in honour of the Prince of Wales’s visit.”

You will still recognise some of the names. They included some of the foremost Scottish agricultural implement makers.

The photos are from the Fife Vintage Agricultural Machinery rally, June 2017 and other rallies.