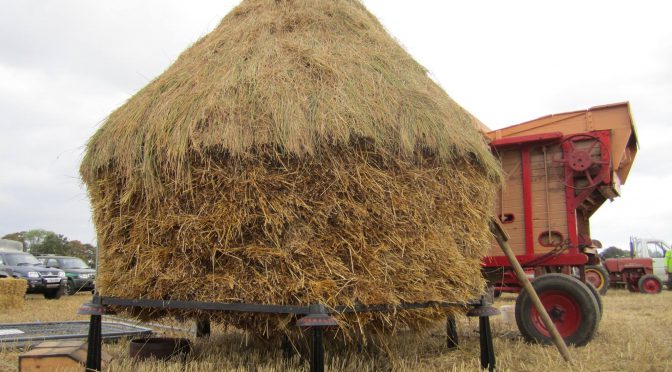 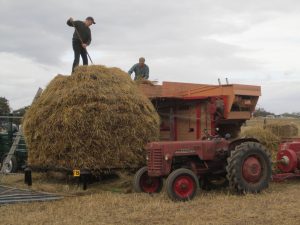 It isn’t often that we see threshing displays in Scotland which include built stacks of grain to be threshed.  Usually sheaves are delivered on trailers or carts and the sheaves forked from them.

The display at Strathnairn Farmers Association Vintage Rally and Display in 2014 included a stack built on iron stack pillars.  These pillars and their associated framework which linked the pillars together were used for vermin control and also ventilating purposes. 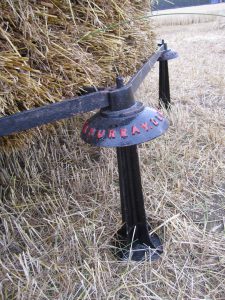 Stack pillars were made from a number of materials, depending on what was available locally.  They could be carved from stone, or made at tileworks (which also manufactured troughs for byres and other products).  In these cases, they would be linked together by a framework made of wood, or other materials. 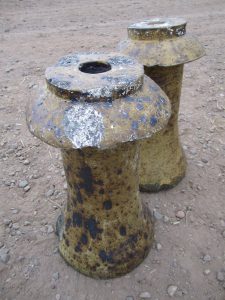 A number of these iron pillar makers were also associated with the making of other iron-work for Scottish farms.  For example, Brownlie & Murray, Possil Iron Works, Denmark Street, Glasgow, from the mid 1878s, was also a maker of iron fences, gates, bridges and roofs; the firm later described itself as “structural engineers”.  Another maker, Thomas Gibson & Son described their activities as “iron and wire fence, iron gate, and wire netting manufacturers, wire workers, smiths, engineers and agricultural implement makers’ in 1869. 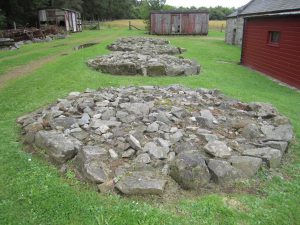 Some farms did not use stack pillars. Instead, they used a round circle of stones and boulders which were raised from the surrounding ground.  These remained a fixed feature of the stackyard throughout the year.  They, however, still served, to help to keep the bottom sheaves off the ground.