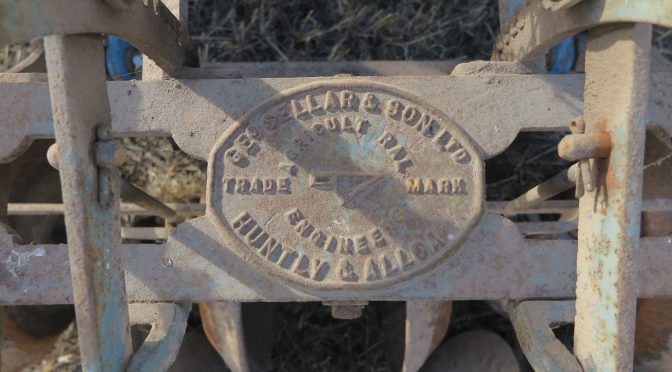 Obituaries are a good source of evidence for revealing the lives and interests of a number of the key Scottish agricultural implement makers. They reveal information such as how their careers developed, their training, and their relations with the local communities.

Detailed obituaries of one of the members of the Sellar family of Huntly were published in a number of local newspapers. Those of Mr R. H. N. Sellar, Huntly, a well-known member of that important family of plough makers are worth quoting at length.

A lengthy one was published in the Aberdeen daily journal of 31 July 1918:

The Aberdeen press and journal also published a further one on 6 August 1918. This time, the Rev A. S. Laidlaw of Huntly UF Church referred to him:

“The loss occasioned by the death of Mr Sellar, he said, was very great when they thought of the manifold and distinguished service of which his life was full. He was a pillar of that church, a conspicuous figure of the community, an eminent public servant in the county, and a man of growing importance, even in the national sense. Graces of person were accompanied by intellectual and practical qualities of a very high order; he had a wise and understanding mind; he could think on a large scale and arrive at clear conceptions, and this he knew his own mind and could trust his judgement. It was this characteristic that marked him out for leadership. If he were to compare him with any well-known personage in public life, it would be with Mr Joseph chamberlain. Neither went to councils wit confused, unseeing minds, to pick up some ideas in the course of the debate. The business was mastered, and, naturally, people of less thorough habit of mind could usually do little else but follow.
At the early age of 24 he was called to the his father’s place in the management of the family business, and speedily made his power felt. His grasp, initiative, and organising faculty enabled him to build with splendid success on the foundation already aid. The School Board ws the gateway by which he entered on public service. he developed a strong interest in education, especially in its administrative aspect,and by close study qualified himself to deal with its problems with an expert’s knowledge and authority. His accession to the County Council greatly enlarged his sphere of action nd influence. With the coming of the war the scope of his labours was further enlarged and became more than provincial, even national.
He has no more than fully matured his powers by experience of affairs and knowledge of men. If he had been spared, its seemed clear that he was only coming into his kingdom. If not greater, more conspicuous, service lay before him, and honours would have come. He had the consciousness of power, which was bound to be a spur to ambition; and it is certain that no matter with what body of men he might be called to work his weight would be felt, and high responsibilities would come to him.
All the while he was assiduously developing, and on a large scale, the business of his firm. The transferrence to Alloa was a heavy and courageous undertaking, hard upon which, unfortunately, came the unforeseen complications produced by the outbreak of war.
In his long association with the leader they had lost he recalled only one occasion when a very important decision was reached, which defeated a cherished scheme of his. A smaller man would probably have taken offence, and perhaps withdrawn himself and his support on which a great deal depended, but he accepted the ruling and played a leading part in carrying to completion the plan adopted.
The reference closed with an expression of sympathy for the bereaved family.”