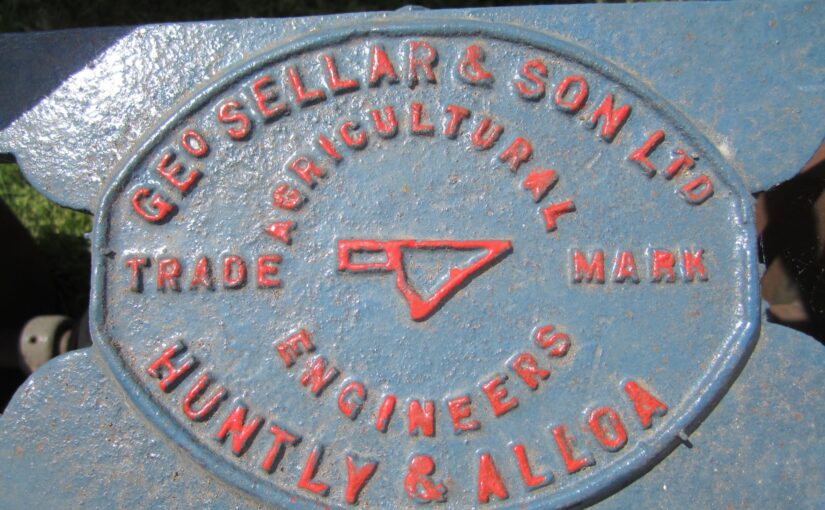 As we go through the A. to Z. we are seeing some great names of renowned Scottish agricultural implement and machine makers. This week is no exception.

Again, we will look at some of the names that may not be as well known.

William Sinton was a major name in the Scottish dairy world. He started his business as a cooper in Jedburgh, Roxburghshire by 1870. By 1880 he described himself as a churn manufacturer and then as a patent churn manufacturer. By 1903 his sons had joined him in business. By 1914 he moved the Waverley Churn Works to 36 Bedford Road, Edinburgh, where they remained until at least 1929. The business was a regular advertiser in the Scottish agricultural press and attended the Highland Show throughout Scotland. William applied for a patent in 1870 for the invention of ‘improvements in churns’. He won two silver medals for his collection of churns by the Royal Highland and Agricultural Society of Scotland in 1870 and 1872.

James Simpson, was in business as a cart and ploughwright, Princes Street, Peterhead, Aberdeenshire from at least 1846. By 1858 his business became known as James Simpson & Co., Peterhead, Aberdeenshire, a name that continued to be associated with Peterhead until 1930 when it changed to James Simpson & Son (Peterhead) Ltd. This was a name that continued to be known until at least the 1950s – according to directories.

In the 1870s the company started to describe itself as agricultural implement makers. Its speciality was seed sowers. This was a speciality that continued until at least 1928. By that time it was also noted for its harrows and grubbers. While it had made carts from the 1840s, by the 1920s it started to be a motor car body maker; the following decade saw it also as a motor engineer and garage.

The business frequently exhibited at the Highland Show from 1858. In that year it was awarded 4 sovereigns for best one horse farm cart. In 1877 it was the inventor of the new broadcast sowing machine for grain and grass seeds.

Shearer Brothers, Maybank Works, Railway Station, Turriff, later of Balmellie Street, Turriff undertook business from at least 1876 until 1972; on 18 July 1972 the company passed a special resolution to voluntarily wind up the company. The final winding up meeting was held on 29 August 1972.
The company undertook a number of trades and was an agricultural engineer, an agricultural implement maker, a machinery maker, a mechanical engineer, millwright and later a motor engineer. It was active in promoting its manufactures: exhibiting at the Highland Show from 1876 until 1939. It was awarded a medium silver medal for foot power thrashing machine in 1876. It also entered into the trial of machines for cleaning all sorts of grain and other seeds from weeds in 1884. It was also regular advertiser in the North British Agriculturist from 1884 onwards.
The company manufactured a range of threshing mills. In 1876 it manufactured a foot power thrashing machine which it described as a new invention. By 1881 it manufactured its “Advance” thresher for foot and hand power and the “Simplex” rotary fanner. By the following year it was also manufacturing a small hand thresher with adjustable feeder. These continued to be its main manufactures for following years. To these were added the new “Paragon” dressing and screening machine in 1887.

In the early 1850s if you heard the name “Scoular’ you would have associated it with the company of Scoular & Co. agricultural implement makers at Haddington. In 1857 Mr Scoular retired in favour of Kemp, Murray & Nicholson of Stirling who had taken a lease of their premises and purchased the whole stock in trade, machinery, patterns and working plant.
By the early 1870s there were a number of members of the Scowler family around Stirling that worked as implement makers. James Scoular of Woodside, Kippen, made ploughs, drills as well as a collection of implements. There was also John Scoular of Crook Smithy, Stirling, who continued in business until at least 1910.