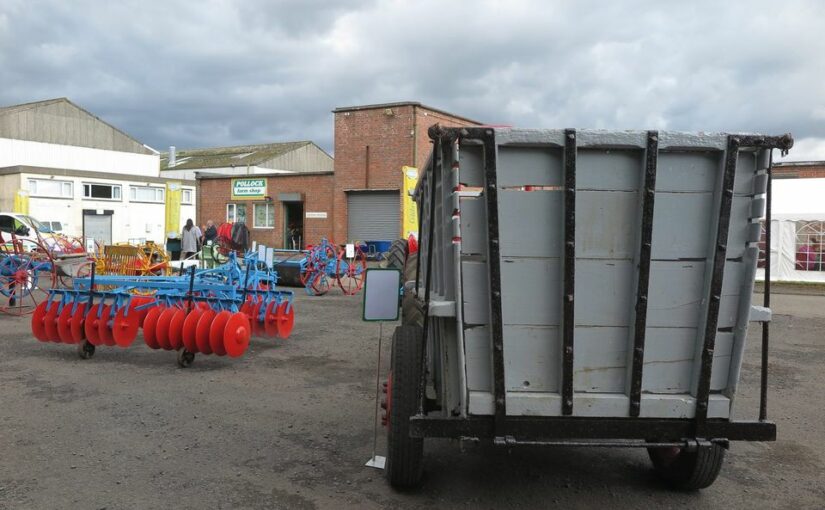 We have some big players under the letter P.

Pollock of Mauchline, which survives today as Pollock Farm Equipment Limited. Its roots go back to 1867 when Andrew Pollock started a shop in the Cowgate, Machine. By 1877 his address was the “Implement and Machine Works, Mauchline”. He was an agricultural implement maker, a smith and a smith and farrier.

Andrew quickly recognised the importance of providing farmers with a broad range of implements and machines. In addition to making his own ones, he also acted as an agent for other makers. By 1886 he acted for W. N. Nicholson & Son, Newark on Trent, famous for their horse rakes. In later years he also sold manufactures from other of the makers such as Thomas Corbett, Perseverance Iron Works, Shrewsbury, and Harrison, McGregor & Co. Ltd, Leigh, Lancashire. All are major English makers.
Andrew became well-renowned for his own manufactures, winning a number of awards for them. But it was those implements for cultivation of the soil, hay and straw trussers, potato diggers and cheese presses that he was especially known, even well through the twentieth century. His manufactures were, according to the North British Agriculturist in 1893, “characteristically those designed for farming as carried on in Ayrshire and the adjoining counties”. He was also an inventor, applying for two patents in relation to his machine for topping and tailing turnips in 1878.

By the time Andrew died in 1904 he had a well-regarded and successful business. His widow, Mrs Martha Jamieson or Pollock, carried on the business until it was transferred to his sons Andrew and William, to form A. & W. Pollock on 31December 1912.

In the 1920s Pollock was renowned for rick lifters, potato diggers, hay and straw baling machines. In later years it was agent for a number of major English makers including Albion, Bamfords, Alfa-Laval, New Holland and Clayson.

The company was an innovative one. In 1935 it entered its ricklifter and low loading float combination for the New Implement award at the Highland Show. This was followed by a powerdrive hay tedder, invented by John R. Pollock, in 1959. In 2019 Pollock Farm Equipment was awarded a silver medal by the Royal Highland and Agricultural Society of Scotland for its Pollock Rope Scraper System.

The company was not only a key player in England, but also in Scotland and internationally, also acting as contractors to H.M. Government, British and foreign railways by 1905. In Scotland it had an extensive network of branches which allowed it to have a wide, and local presence, throughout the country. By 1875 the first of these was in Glasgow, at 113 West Nile Street, an address it remained at until 1879, when it moved to 41 Hope Street. By 1884 it had established a head office and works in Scotland, the Albion Works, at 69 and 71 McAlpine Street, Glasgow. The company also had other addresses in Glasgow: they included Paisley Road (1895), 25 South Kinning Place (1903), and 21 Stockwell Street (1909).
Other towns quickly had a branch establishment of Pooley’s. By 1877 there were ones at Dunfermline, Fife and Aberdeen. In 1880 there were mechanics stationed in Edinburgh, Dunfermline and Dundee. There was a branch at Inverness in 1901 and at Perth in 1904.

D. T. Paterson, Sinclair’s Hill, Duns, Berwickshire, continued in business from at least 1901 until at least 1939. Paterson was a smith and farrier. He was well known for his windmills. In the first decades of the twentieth century these were from the Aeromotor Co., Chicago. He was a regular exhibitor at the Highland Show until 1939 as well as a regular advertiser in the Scottish farming press – the Scottish Farmer and the North British Agriculturist.