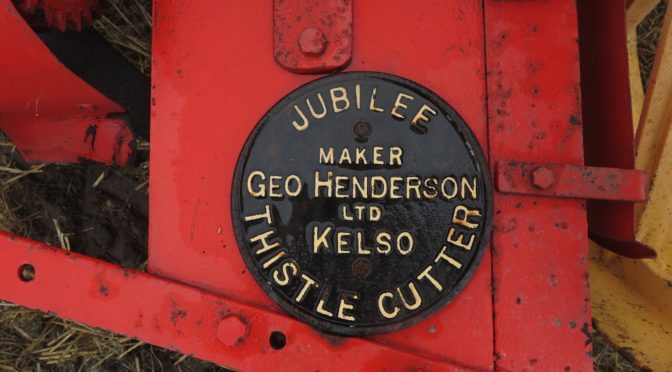 According to Henry Stephens in The Book of the Farm (1908), writing of summer pasture, “thistles and docks are the most troublesome of the larger weeds. These should be cut or hoed out twice in each season. When the soil is fairly moist docks should be pulled out by the roots. The best time to cut thistles is when the flower is beginning to form, as the roots are now weaker than when the plants are only a few inches above the ground, and they are not yet mature enough to produce seed. The common thistle spreads principally by underground stems, which make this plant much more difficult to eradicate, while the Scotch thistle is produced from seed only, and is therefore more easily dealt with. The smaller weeds, such as daisies, buttercups, sorrel, and plantains, can be effectively checked by judicious manurial treatment and the proper grazing of pastures.”

Thistle cutters were a frequently noted machine at farm displenishing sales. One was noted at Sundhope, Yarrow, in 1910. Another at Faldonside, near Melrose in 1908.

The photographs of the Henderson thistle cutter were taken at the Strathnairn rally, 2019.