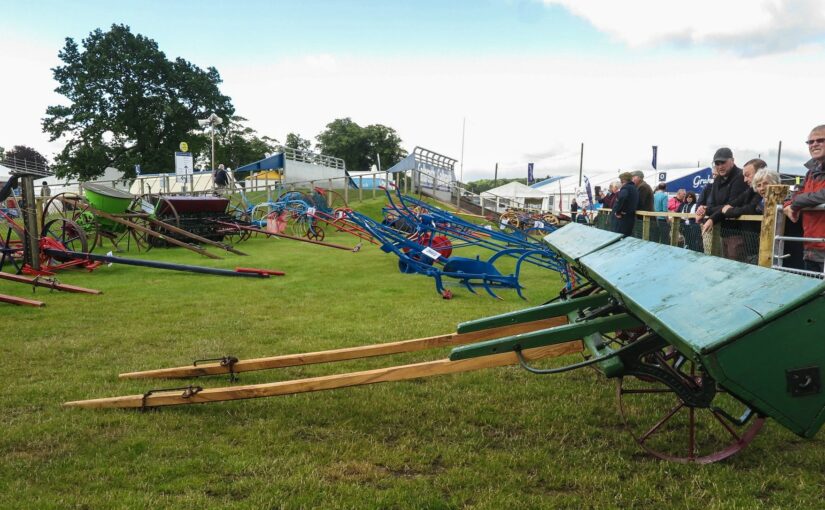 The Glasgow Agricultural Society was a major agricultural association in Scotland in the nineteenth century. Its show was a key part of the farming year and attracted considerable attention. The show included an implement department as well as the usual displays of cattle and other livestock.

Accounts of the show reveal the names of some of the key makers of implements and machines for farmers in Glasgow and its hinterland. They also showed what was new and innovative.

An account of the show from 1863, at a time when Scottish agriculture was prospering and the agricultural implement trade was increasing provides some highlight on the trade and the people involved in it. The North British Agriculturist writes:

“The eleventh annual summer Exhibition of the Glasgow Agricultural Society commenced yesterday, in the cattle market. Today the live stock were placed, and the prizes awarded. The Show, on the whole, was equal to that of previous years, although the number of entries, both of implements and live stock, was rather under that of last year; but the general superiority of the implements and animals shown amply compensated for any falling off in the number of exhibitors.

Implements
The implements were generally distinguished by simplicity of design, with excellent material and workmanship. Mr Gray, Uddingston, was the only exhibitor of thrashing machines and portable engines. The collection of implements from Uddingston reflect credit on their manufactory. Mr Jack, Ayr, showed mowers and reapers and combined machines, apparently well designed, with the parts carefully adjusted. Messrs Thomas Perry & Son, Glasgow, had an excellent collection-a reaping machine, a haymaker, hoes, harrows, corn-crushers, and straw cutters. Mr A W Dunn, Glasgow, showed the Buck eye combined reaping and mowing machine. Two excellent one horse carts were shown by Mr J. Angus, Parkhead, Glasgow. Mr Bradford, Manchester, exhibited an extensive collection of washing and wringing machines. P. & R. Fleming & Co., had a collection of cheese pressers, milk dishes, &c, and an improved three-toed steel potato hoe. Messrs Gordon & Winter, Ayr, showed an apparatus for the manufacturing of cheese; the milk is heated, and the curd broken up by the machine.

Readers will recognize some of the names like Jack of Maybole, P. & R. Fleming, Glasgow, T. Hunter, Maybole, Kemp, Murray & Nichoslon, Stirling, and Gray of Uddingston, all who continued in business until well through the twentieth century.

The photographs of the special display of horse-drawn implements and machines was taken at the Royal Highland Show, June 2019.