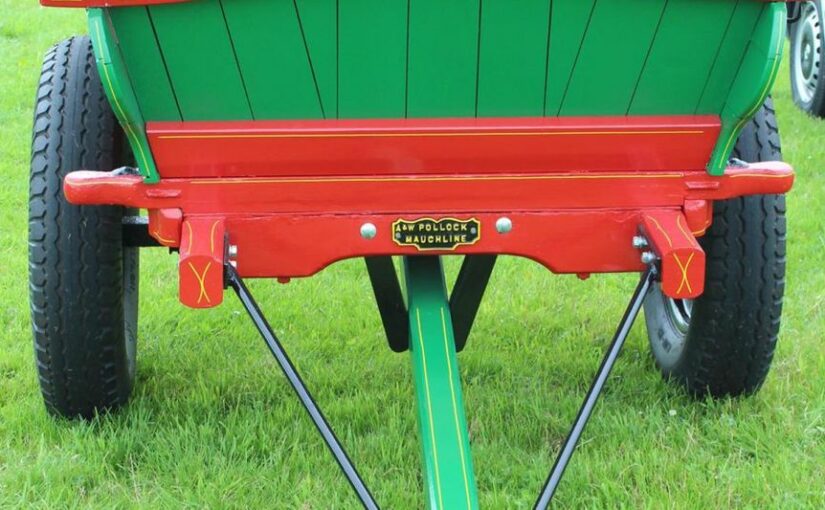 The Ayrshire Agricultural Association Show had an extensive display of implements and machines at its shows in the nineteenth century. It was a major show in the diaries of key implement and machine makers. While the exhibitors were largely from Ayrshire and neighbouring counties – and Glasgow – there could also be some noted English makers with manufactures specifically for Ayrshire agriculture.

The Ayrshire Advertiser has an extensive account of the exhibits at the 1888 show. This was a time when Ayrshire – and Scottish – agriculture was in a long depression that was to continue until well through the first decade of the twentieth century. During that time it was important to economise on labour costs. Mechanisation played a key role in this, though farmers were extremely cost conscious.

“The implements
Notwithstanding the long depression of trade, and the too well known want of money among farmers, the exhibition of implements and machines is fully up to that of any previous year. We were afraid at one time that the attraction of the International Exhibition at Glasgow would have taken away many who have hitherto attended at Ayr, but no such falling off is visible. It is true there is nothing specially new, but before hearing the judges’ report we are inclined to think that improvements of considerable value are generally to be found in many of the stalls, and the walk round the sheds containing the machines and implements is quite as attractive this year as in any one previous.

Among the first in number, and, we may add, in importance, we find as usual the great stand of Jack & Sons, Maybole, with the genial Mr Marshall in attendance, and nearly 100 entries. Mowers and reapers in endless variety, carts and barrows, chaff cutters, turnip slicers and pulpers, all of the newest make, and too numerous to particularize. Indeed, Mr Marshall makes a first-rate show of his own. Next to this stand we have Thomas Bradford’s exhibition of churns and washing machines, which is specially attractive this year. Ladies especially would do well to visit this stand, for it may well be called the domestic stand of the show-yard, and many of the articles must be seen-a description only can give a very imperfect idea of the exhibits.

Passing over several stands of more or less importance, but all deserving of some attention, we come to another Maybole exhibitior, Thomas Hunter, whose display is certainly as attractive this year as formerly, new ploughs, rollers, grubbers, scarifiers, turnip cleaners and cutters, make up 70 exhibits, many of them deserving careful attention Ayr Show seems to be also improving in its turn out of carriages, gigs and dogcarts. Mr Robertson and Mr Bryden, Ayr; Messrs Smith and Duncan, Kilmarnock; Mr Holmes, Irvine; Wm Goudie, Whithoen; Sloan & Lonard, Penman & Son. Dumfries, have all stands, and exhibits very neat machines of various kinds. They certainly are elegant, seemingly strong, and considering the high finish are much cheaper than formerly. Mr J. P. Cathcart’s stand as usual deserves a special notice of Wood’s improved Binder, and various other agriculture implements which Mr Cathcart has always kept well to the front.
Cumnock is represented with stands occupied by John Andrew, chemist, and George McCartney & Co., and John Drummond & Son, millwrights. Kilmarnock by W. G. Highet, with a good lot of dairy utensils, and D. Proctor & Co., engineers. Among local exhibitors we notice Mr Thomas Brown, cooper, with an excellent lot of butts and chissets. Mr James Mackie, millwright, has churns and cheese presses of improved quality, and other articles, which makes up an attractive stand. Daniel Wyllie & Co. as usual exhibits samples of their manures. Mr T. L. B. Robertson shows some famed bee keeping appliances. Mr Walsh, brassfounder, has some very fine specimens of his workmanship.

There are still a number of names that can be seen around the rally fields in recent years.